Abortion: Two Sides of the Argument

In today’s society every time a person turns on the television, goes on a computer, turns on a radio, passes a billboard, or picks up a newspaper that person is bombarded with debates. There are many different debates and each debate with two parties both of which have two very different and sometimes conversational opinions. Everywhere a person looks they are faced with arguments such as president Obama’s affordable healthcare act, gay rights, the matters of the death penalty being legalized or illegalized in all states, and many more.

Don't use plagiarized sources. Get your custom essay on
“ Abortion: Two Sides of the Argument ”
Get custom paper
NEW! smart matching with writer

In this paper I will not talk about any of the previously stated arguments.

I will however talk about one of the most heated and controversial arguments of today. Before I continue with the debate I have chosen I am stating that I will not be sharing any of my personal opinions or views on the matter. I have chosen to discuss the debate regarding abortion and the two sides of the argument.

I will explain both Pro Life and Pro choice and the fallacy both sides use when trying to gain followers. Just about every person has an opinion or a side when it comes to the topic of abortion. I have researched percentages based on people who are Pro Life vs. Pro Choice and if abortion is ever Justified.

A poll done by Gallup in May of 2013 helps to show some percentages on what side or sides the American people are taking. Based on a one hundred percent model forty five percent of people are Pro Choice, forty eight percent are Pro Life, three percent were mixed, 2 three percent did not understand the meaning of the terms provided, and two percent had no opinion.

In the poll a majority of the people who participated had chosen which side of the argument they had agreed with. In another recent model done in May 2013 by Gallup shows the percentages of people’s views on if abortion hould ever be legal and Justifiable.

Also that the abortion industry is the main cause of what the organization believes is the murder of an human being. The members of Pro Life have many different tactics implemented to publically protest abortion. The Pro Life organization does not condone any violence in the protesting of abortion, but the organization does use graphic material in the “Face the Truth: Public Education Initiative”. This educational initiative uses graphic pictures of real aborted fetuses to show the aftermath of the procedure. This protest is described as “to show our fellow Americans the ugly truth about abortion”.

It is the national association for professional abortion providers. The N. A. F provides training and services to qualified abortion providers in North America. The goal of the N. A. F is to ensure women’s safety when to comes to abortion whether it is elective or medically necessary. Pro Choice is centered around that women should be able to make private medical decisions with their healthcare providers and to have the right to chose what happens to their bodies. The N. A. F also supports the education for women and youth n different contraceptive methods to help prevent unplanned pregnancies.

Also the organization provides resources for women to make inform decisions when it comes to their choices. The organization helps to provide women with the education about abortion, adoption, and parenthood. The organization sets quality standards for abortion care and to make sure the medical providers such as Nurses, Physician Assists, Doctors, and Mid wives are qualified to provide high quality care. N. A. F also helps with legal legislations to keep abortion legal. The organization fears what ould happen to women if abortion was to made illegal.

Pro choice does protest to keep abortion legal in the United States. The Pro Choice advertisements are not as graphic as Pro Life’s. Though Pro Choice does have advertisements of what environments women may find themselves in if abortion were to be made illegal. Pro Life also uses education to teach women about what had happened in the 1950’s to the 1960’s before 4 abortion was legal in America. This is used to create awareness so that history will not repeat itself. According to Our Bodies Ourselves a Pro Choice website uses statics o show mortality rate in women to either tried to perform a self initiated abortion.

Between 1950 and 1960 before women were legal able to get an abortion 1. 2 million of those women did self performed abortions. In countries where abortion is still illegal unsafe abortion is the leading cause of maternal deaths. This accounts to 219 women dying daily worldwide. Both organizations use medical facts and statics for a large part of their demonstrations, however they both employ of use of a logical fallacy to make their cases. The logical fallacy that Pro Life and Pro Choice both use is appeal to emotion. Appeal to emotion is a fallacy to manipulate the recipients’ views by using an emotional trigger.

This means that the parties involved may not be using actual valid intormation to persuade a person. It is very clear botn ot the organizations are against the other. The names are the first thing I had noticed. The names are completely opposite from one another. For example is a person is Pro choice then they are against life or that person is for death or murder. Also if a person is Pro Life then that implies that person is anti-choice. For another example Pro Life members eb advertisement and That I have personally seen driving on 95 is a image of a baby with the saying “Endangered species. Obviously children are not a endangered species because human beings are not endangered. This is used to evoke a strong emotional response to gain Pro Life members and not using actual facts to prove a point. Pro Choice also use the appeal to emotion to gain members as well. In a advertisement for the Pro Choice Public Education Project it contains a picture of a dirty bathroom that’s covered in filth. Above what is the bathtub is a plaque that says ” Operating room”. A bathroom is not an operating room this once again used to invoke emotion. The 5 emotions of despair and fear.

This is used in the campaign for keeping abortion legal. Also someone the slogans each side uses appeal to emotions a well. For example Pro Life slogan “You might forgive yourself, but a dead baby sure can’t”. Whether the baby to speak of is dead or alive the said baby does not have the capability to comprehend forgiveness. Both side also use TV adds to discount the other side and to persuade the viewers. The internet video 180 shows how to change a person’s mind about abortion within seconds. The method that was used involved Hitler and his influence on the German people.

Ray Comfort is the interviewer in the movie. Comfort asks a few young people about their feeling regarding the killing of the Jewish people. All the participants agreed that what had happened was wrong and that killing a person was wrong. Comfort then moved into abortion after using emotional response to what happened in the holocaust and comparing that to abortion. Comfort put that abortion is America’s holocaust. In conclusion though both Pro Life and Pro Choice have valid points and information both of the rganizations use appeal to emotion to persuade potential followers.

Abortion: Two Sides of the Argument. (2018, Nov 14). Retrieved from https://studymoose.com/abortion-two-sides-of-the-argument-essay 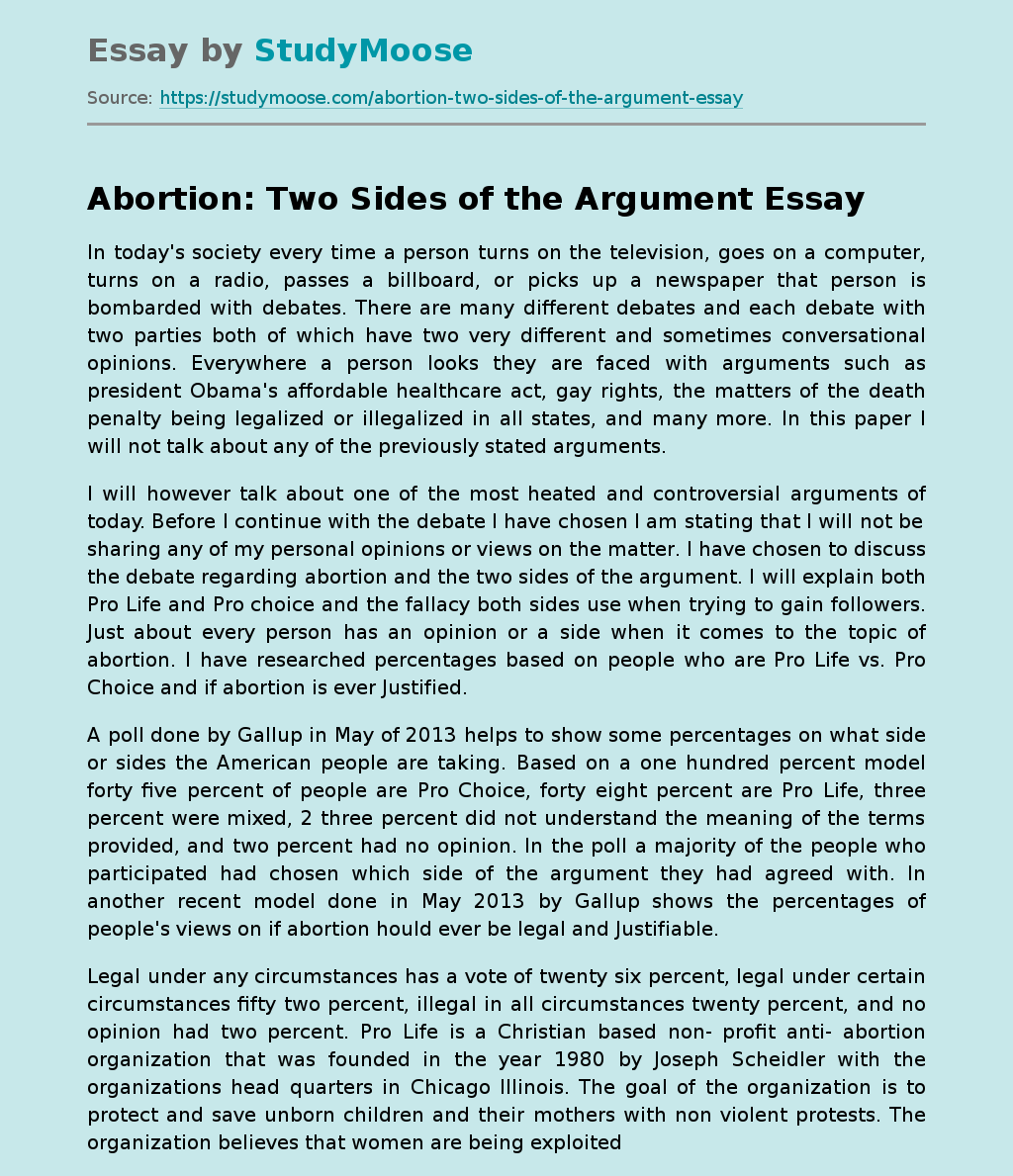