Every coin has two sides! A head and a tail, Similarly Social Networking has its own pros and cons. Websites such as Facebook, Twitter, LinkedIn and many others are playing major part in a person’s life. Social Networking has become a major part of people’s life to stay connected to their Family and Friends. The world is globalizing every day and in this world of 21st century where a whole a lot is changing and is getting computerized, Social Networking is leaving an impact on people and their lives.

Turn in your highest-quality paper
Get a qualified writer to help you with
“ Two sides of social networking ”
Get high-quality paper
NEW! AI matching with writer

Two thirds of the teaching staff believes that the use of social networking diverts a student’s attention from studies rather than helping them out (1).

Social networking also lures a user to waste time on non-important things. I myself have being a social networking user and it surely does NOT help anyone to learn new stuff. Social networking is made to stay connected with your old friends and family members and people with similar interest, but cannot meet cause of geographical location and limitations.

Social media usage also affects a person especially students mental illness! Social networking can increase feelings of dis-connect and higher risk of feeling Stressed, Depression and feeling Low in confidence. Children’s have a habit of comparing stuff with others and to learn or to adapt the way of living by listening and watching. What social networking does to a children’s mind set is that, a child watches what is going around him and then compares his lifestyle with the ones he know and tries to act like them. This increases the chance of loneliness in them and makes them feel really low about their life. Social Networking hence, is a major factor of mental illness problems in humans.

Many educational programs are also affected by social networking sites. Social networking enables students to cheat on a school assignment and homework’s. It allows students who have not taken the exams or the homework to see the posted question from online websites and knowing the answers beforehand (2). Many problems such as identity theft are also vulnerable by social networking websites. Computer hackers and Identity thieves take information like Birth dates, School names, Pets name and much more private information to make a fake account and answer the basic security question which leads to identity theft.

Small businesses benefit a great deal by using social networking free application to reach out to their consumers and customers. Social network has increased the level of customer appreciation and customer service. A haircut parlor near my area (Indian land, SC) Is a really good example to share, people who got a haircut from that particular parlor uploaded their new hairstyles pictures using social networks and due to that, the parlor had lot more customers coming for the haircut than before due to this small help through social network. So, basically Social Networking is a boon to new business owners and businesses.

Social networking also helps a student in a lot of different ways. It allows students to access the internet report and communicate with their fellow colleagues through online message system and discuss educational topics (2). It allows students who are shy in nature to talk with their other student friends and do a school related assignment without feeling awkward or nervous. Social networking does a really great job for student to help them out find people who share the same interest as they do, social website ‘Facebook’ helped me get into a Cricket Club by making me connected to proper teams and people. As a new immigrant in the States, it really helped me out to learn different cultures and traditions.

Social networking also helps people find employment and jobs to job seekers. 64% of the companies uses social networking websites to recruit people, because wider pool of applicants, more efficient searchers. Websites like ‘LinkedIn’ are very helpful websites to a lot of people which were able to find employment using the particular website. I had a friend who found a job at Wells Fargo bank. It turned out that one of his new friends knew about the opening at one of the branch of the bank and asked my friend to check the website and fill out the application form online. They looked at his resume and called him in an interview and He Got the Job. All thanks to social networking. Even colleges and universities use social media help to recruit and retain students. Surveys have shown that 87% of colleges and universities use Facebook to recruit students. 76% use Twitter and 73% use YouTube. It has shown that schools and universities use Facebook application to retain students. Social networking helps to support these colleges and universities to find students interested to study in their educational programs.

So, Social Networking has its own advantages and dis-advantages. But these factors can be controlled by you, if you use some of the tips while using social networking websites. Use social networking to stay in touch with your old buddies and family, but make sure that you do not get overly attached to it at some time. Limit your time using social network (an hour a day is ENOUGH!) Do not allow social media to disturb your personal life and responsibilities, do your work first and then worry about what others are doing. Use it for good reasons, and not for cyber bullying, identity theft and more.

If you learn how to manage your life using a social networking as a part of your life, it is actually a boon to you and not a bad thing. It depends on how you use it and why do you use it. People who manage their life by adding social media in their daily routine are more happy, successful and less stressed. 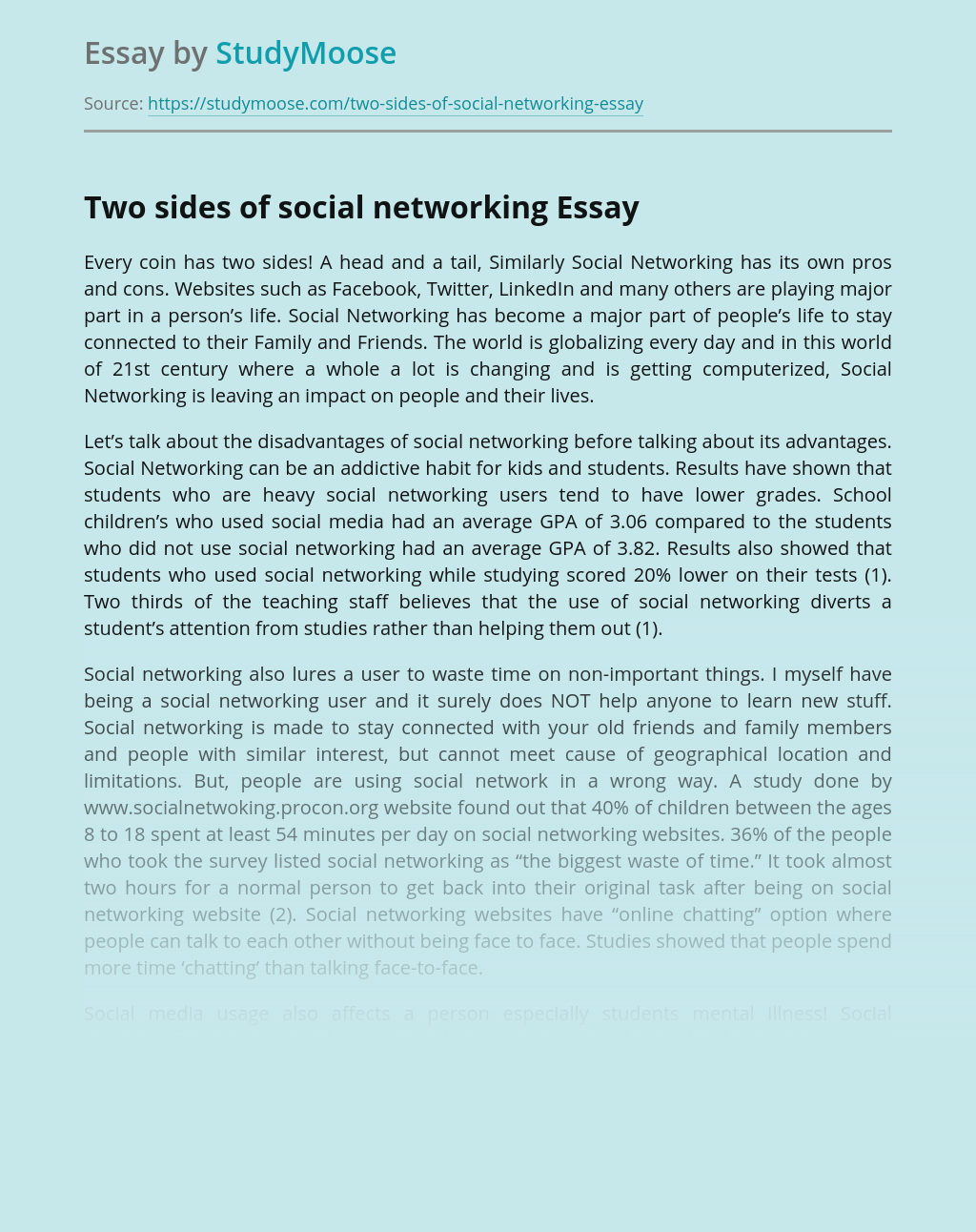 Turn in your highest-quality paper
Get a qualified writer to help you with
“ Two sides of social networking ”
Get high-quality paper
Helping students since 2015
Stay Safe, Stay Original