A study of Reading Habits Analysis

The theme of the poem is that trying to ignoring reality does not solve any problems. The speaker dives deeps into books to hide from his day to day problems. However, he does no benefit from this when his eyes go bad from reading. In the end, the speakers problems caught up with him and he could no longer escape from them in books. He unfortunately turned to alcohol to solve his problems. Larkin demonstrates the theme by hinting the character traits of his persona.

Turn in your highest-quality paper
Get a qualified writer to help you with
“ A study of Reading Habits Analysis ”
Get high-quality paper
NEW! AI matching with writer

Also Larkin uses elements such as tone, metaphors, similes, allusion and symbols to create a deeper understanding of the theme.

“A Study of Reading Habits” is somewhat of dry title, but as the poem progresses, it starts to make more and more sense. The poem is about the progression of a mans life, from his childhood to his adult life. He grew up loving books because he could escape from reality. However, reading books became a habit to escape everyday hardships.

But overtime the books started reminding him of his own life and he could no longer escape. In his youth, the speaker would use reading to get away from different things such as school and bullies. He did not care if reading ruined his eyes because in books he could imagine anything and escape reality. He could imagine being cool and fighting the bullies “twice my size” (line 6).

Later on, during adolescence, the speaker liked reading darker books. His eyes were starting to go bad from reading so he had to wear “inch-thick specs” (7).

He enjoyed the evilness of his books. With his “cloak and fangs” (9) , he would have sex with women and humiliate them . Now, in the present, the speaker doesn’t read anymore because the stories are too closely related to his issues. He can no longer escape his problems regarding his lousy life. As a result, the speaker condemns books altogether stating that they “are a load of crap” (18) and turns to alcohol to resolve his problems. He recommends to “get stewed” (17) instead of reading.

The speaker in this poem speaks in first person. The imaginative person envisions a fantasy world where he could be cool and “deal out the old right hook” to his bullies (5). The speaker is also lonely. In the final stanza the speaker realizes that he doesn’t know how to face reality. His whole entire youth was created through fictional books and now the more mature books, highlight his lonesome. Additionally, the speaker is resentful. During his childhood, books were of so much value to him. They were worth “ruining my eyes” (3). But the books in that time were fictional, and most likely of superheroes and other fictional idols. Later on, the speaker realizes he is not equipped for reality and believes “books are a load of crap” (18). The speaker’s tone is disappointed and bitter.

There was a smooth, euphonic quality to the words in the beginning stanza. This emphasized how easygoing and fantasy-like childhood can be. Also, there was alliteration in line 6. The text “dirty dogs” was symbolism of the persona’s bullies. This alliteration illuminated upon the name calling present in youth. Additionally, the poem contained a rhyme scheme within stanzas.

In this poem Larking uses literary devices such as a metaphor and a simile. The line “the chap who’s yellow and keeps the store, seem far too familiar” (15-17) functions as imagery. The speaker is characterizing the character is his stories as the color yellow. The color yellow has negative connotations such as cowardice, faithlessness and betrayal, which is exactly how the speaker is feeling about his book at this stage in his life. This metaphor produces the effect of a cowardly or faithless character, who evidently relates to the speaker. The authors use of a simile is also present in the poem. The simile is obvious in line 12, where the speaker talks about how he thought of women. He did not think much of them and “broke them up like meringues” in his fantasized worlds. He compares women to meringues, a light, airy, sweet desert. This simile functions as his desire for sexual encounters with women.

The poetic device of allusion is also evident in the poem. Allusion is created in the second stanza when the speaker makes the allusion to vampires when describing his interest in dark fictional books. The words “cloak” and “fangs” function as characteristics usually related to vampires as well as the word “sex”, representing his sexual maturity. The speaker’s taste in fictional text matures, along with his sexual interests.

Symbolism is evident in the poem. The most obvious symbolism is the poem structure itself. The poem is three stanzas long, each symbolizing a different stage in his life. The first stanza is clearly represents his childhood. The speaker has typical childhood bullies and his tone even seems to be that of a child. As a kid, he reads escape these bullies and to feel better about himself. The second stanza represents his adolescence stage in life. The speakers tone is much more mature and dark as he talks about evil and sex. He also admires the symbol of a vampire and has a stronger sexual drive.

Finally the last stanza symbolizes his later years. He starts to realize that he cant escape his problems anymore and even relates himself to the weak characters in his books. Also symbolism is evident when the speaker describes the books he dislikes during adulthood. Lines 13 to 17 talk about characters in books that are cowards or fall short. In line 17, the speaker is uncomfortable with these books because the characters “seem far too familiar”. The characters in these books function as symbols of the speaker and his lousy life.

A study of Reading Habits Analysis. (2016, Apr 12). Retrieved from https://studymoose.com/a-study-of-reading-habits-analysis-essay 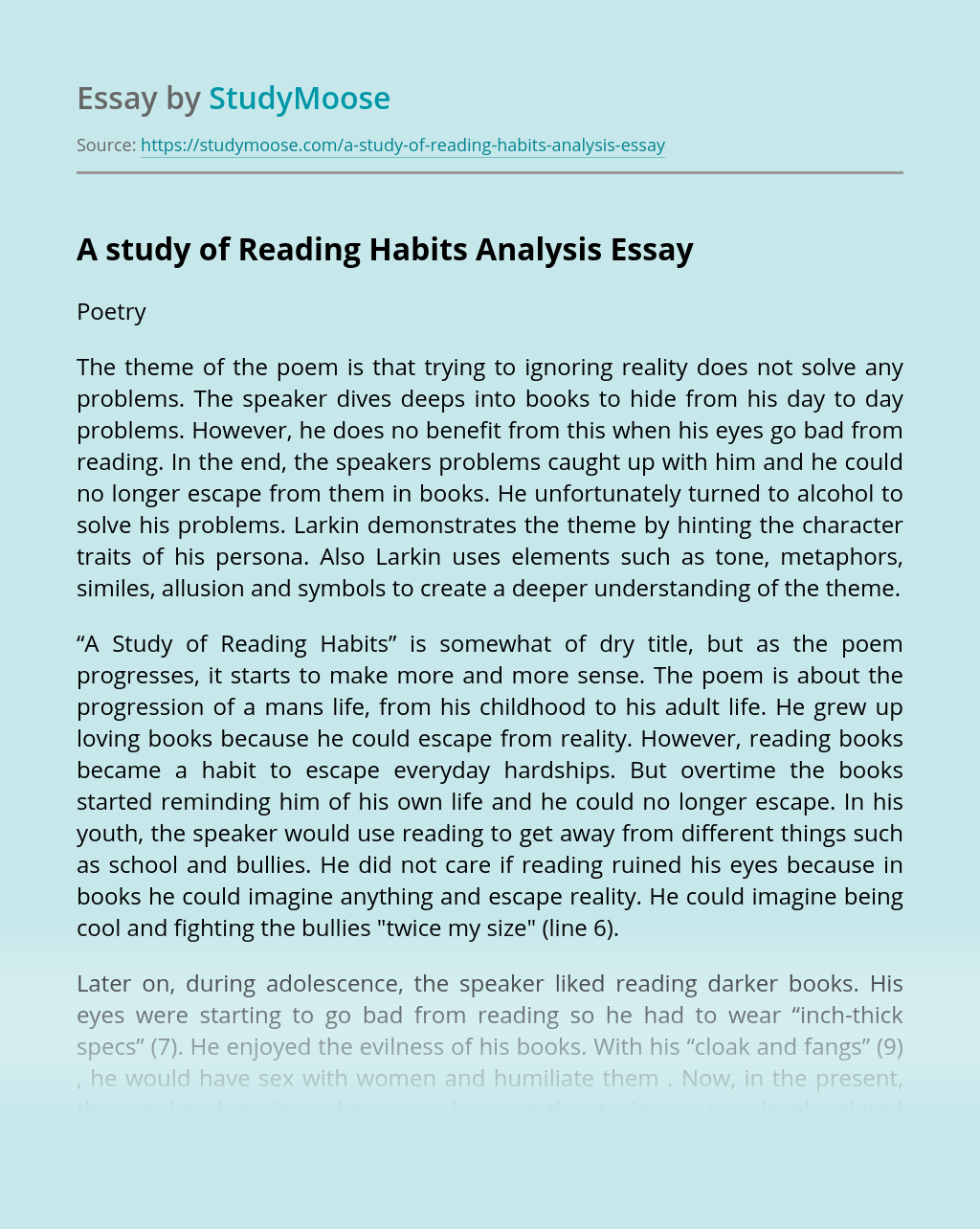 Turn in your highest-quality paper
Get a qualified writer to help you with
“ A study of Reading Habits Analysis ”
Get high-quality paper
Helping students since 2015
Stay Safe, Stay Original