A Separate Peace is one of John Knowles’ most acclaimed works and is based on Knowles’ stay at Phillip Exeter Academy in the early-to-mid 1940’s. It is set in a New England boarding school for boys known as Devon, and begins in 1958 but quickly flashes back to the years 1942 and 1943. In these years at the peak of World War II we follow through the eyes and mind of first-person narrator and protagonist Gene Forrester, as he copes internally with jealousy and hate, and externally with the oncoming draft.

Turn in your highest-quality paper
Get a qualified writer to help you with
“ A separate peace movie ”
Get high-quality paper
NEW! AI matching with writer

As is the fate of many great novels it quickly hit the big screen, and in 1972 a film version of A Separate Peace made its first debut, directed by Larry Peerce, and starring Parker Stevensen as ‘Gene’ and John Heyl as ‘Finny’. Though the movie conveyed the theme – Gene a misled and surreptitiously violent student at Devon makes peace with himself and the world – many symbolic elements, important aspects, and minor details are lost in the transition from novel to film.

The first noted difference between the movie and book is that an the novel, before the flashback while Gene is revisiting Devon he remarks that he wants to visit two places: “I reached a marble foyer, and stopped at the foot of a long white marble flight of stairs.” And: “There were several trees bleakly reaching into the fog. Any one of them might be the one I was looking for.” Strangely in the movie Gene only visits the tree, we can infer that the stair scene is omitted because it might give away the ending too soon.

For instance seeing a tree doesn’t necessarily hint at the further content, while seeing stairs and a tree may result in someone making the connection of falling down which, would ultimately give away the story’s climax and ending. This is a fairly important scene and gets the reader interested through foreshadowing early on in the story but was left out of the film.

As both the novel and movie progress many minor variations are noted, an example of such a trivial difference between the novel and film is that in the movie, Brinker is part of the summer session. This is most likely done to introduce major characters early on, and make it easier for viewers to keep track of key people and less confusing than having them introduced halfway through the movie. Then as the movie continues series of notably different events take place between Finny’s triumph over A. Hopkins Parker and Finny and Gene’s return from their escapade to the Beach. Three of the most prominent changes in this segment are that Parkers swim record is replaced with a pole-vaulting record; Gene doesn’t need to be persuaded nearly as much to go to the beach, and much more detail is put into the beach/boardwalk scene in the movie than the book. A. Hopkins Parkers’ record is changed from swimming to pole-vaulting, which is most likely changed to save time and increase the action and interest level of the scene; pole-vaulting is much more exciting and captivating for the audience than swimming.

The viewers can also see that the record has been beaten instead of having to take Gene’s word from a stopwatch. Next in the movie Gene instantly agrees to accompany Finny to the beach, while in the novel Gene inwardly contemplates the consequences before answering:”The beach was hours away by bicycle, forbidden, completely out of all bounds. Going there risked expulsion, destroyed the studying I was doing for an important test the next morning, blasted the reasonable amount of order I wanted to keep in my life, and it also involved the kind of long labored bicycle ride I hated.

‘All right,’ I said.”This gives us a sense of how persuasive a person Finny is; Gene gives excuse upon excuse and yet ends up giving in to Finny, in the movie Finny’s personality cannot be displayed nearly as prominently because of the fact that Gene doesn’t narrate during in the film, and therefore it is nearly impossible to include the amount of detail in the film as the book. Finally the beach scene unlike most of the movie has a lot of seemingly unneeded time put into it, and is perhaps the only scene that has more detail than its counterpart in the novel. The amount of time spent on this scene when compared to the amount of information left out of the movie is significant, and was perhaps made this way to make up for symbolism left out in the film.

The lack of symbolism in most of the movie results in a tremendous loss of sensory details for the viewer and can result in a lesser understanding of the story. For example in chapter six Knowles entrances us in a symbolic representation of two rivers: the Devon and the Naguamsett. The Devon clean and pure directly relates to the boys life at school – secluded, peaceful, tranquil – while the harsh Naguamsett is ruthless and unsympathetic “It was ugly, saline, fringed with marsh mud and seaweed.” These represent the dangers of life outside of Devon and the draft which is seen to the boys as “governed by unimaginable factors like the Gulf Stream, the Polar Ice Cap, and the Moon.

This depth and complexity cannot be shown embodied in the movie because of the lack of first person narration. Yet another lack of significant imagery between movie and book is when Gene visits Leper after leaving the army, and is told of the madness that overcame him, Knowles creates a scene that directly reflects Leper’s insanity:”The crust beneath us continued to crack and as we reached the border of the field the frigid trees also were cracking with the cold. The two sharp groups of noises sounded to my ears like rifles being fired in the distance.”This is a much more visual showing then the movie in which Leper is pushed down, and rolls into a fetal position.

In conclusion the movie is a good idea but is poorly executed, and unfortunately lacks the novel’s symbolism, many key features, and minor but helpful details. The movie inadequately portrays of the novel and would be difficult to interpret without first reading the book. That said it is not especially bad if one has read the novel prior to viewing the movie and they compliment each other well.

A separate peace movie. (2021, May 02). Retrieved from https://studymoose.com/a-separate-peace-comparison-essay 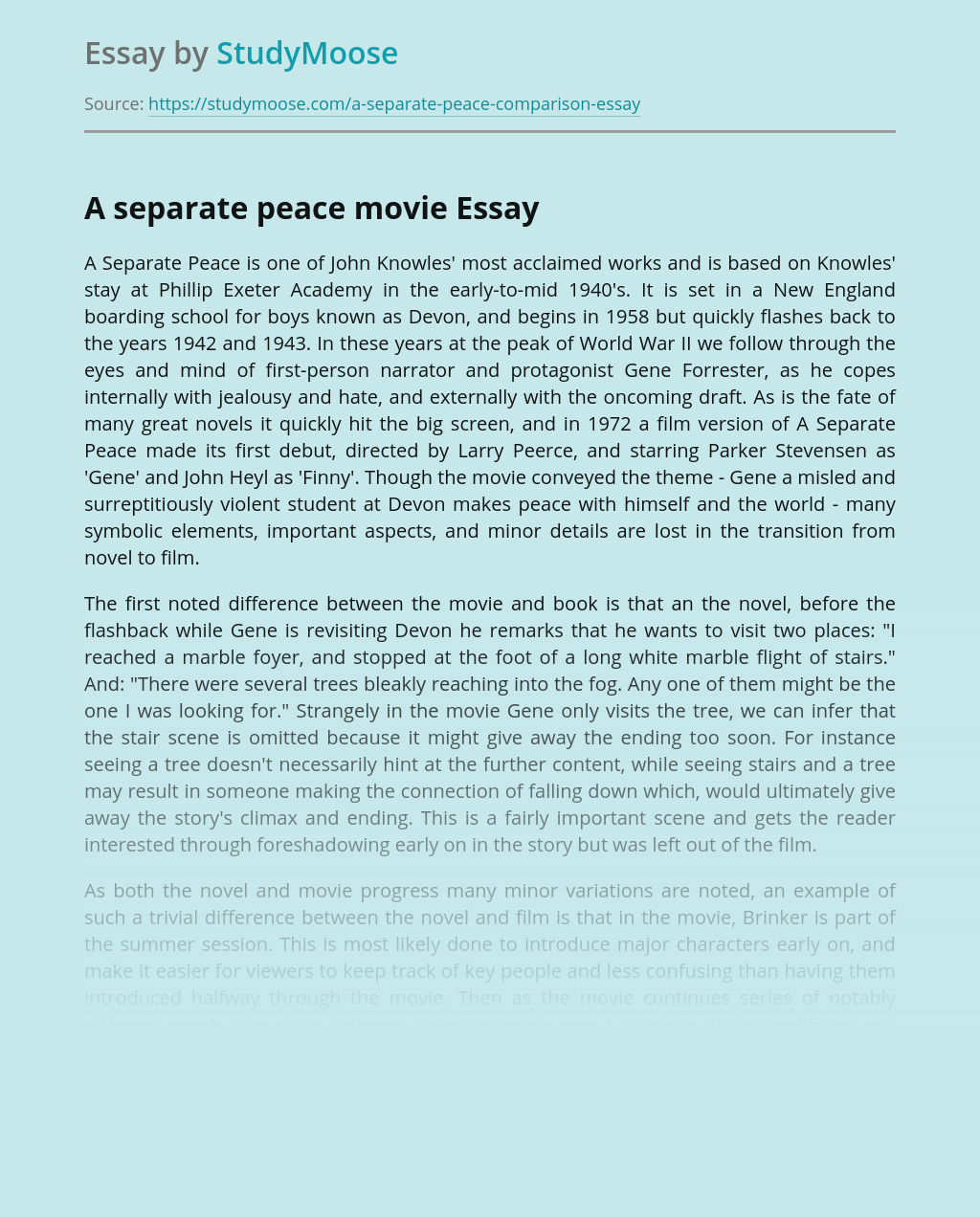 Turn in your highest-quality paper
Get a qualified writer to help you with
“ A separate peace movie ”
Get high-quality paper
Helping students since 2015
Stay Safe, Stay Original