A Reflection of the Cyborg’s Manifesto

The Cyborg Manifesto’s general idea is that under different definitions, all of us could be considered cyborgs. A universal theory is not going to work because in reality, “cyborg is our ontology; it gives us our politics. ” The manifesto was made for a “powerful infidel heteroglossia. ” The manifesto is intended for people in the academe – students, instructors and professionals. The way that it is written is definitely not the style the common people would identify with. The writer’s playful use of words makes it very difficult to comprehend.

Don't use plagiarized sources. Get your custom essay on
“ A Reflection of the Cyborg’s Manifesto ”
Get custom paper
NEW! smart matching with writer

Figurative languages were used many times in the essay; even its main subject – the cyborg – is a metaphor. I see myself as being one of the target audience but knowing it did not add to my interest on the essay. The essay anticipated and responded to possible objections. For example, Haraway stated that “the main trouble with cyborgs…is that they are the illegitimate offspring of militarism and patriarchal capitalism, not to mention state socialism”.

However, she suggested that it might not be something to worry about.

Haraway identified two main arguments in her manifesto. First, “the production of universal, totalizing theory is a major mistake that misses most of reality. ” Second, “taking responsibility for the social relations of science and technology means refusing an anti-science metaphysics, a demonology of technology, and so means embracing the skilful task of reconstructing the boundaries of daily life, in partial connection with others, in communication with all of our parts. ” These two arguments exhibit post-modernity and critic Marxism at the same time.

She refused to accept a grand narrative, or what she calls a “totalizing theory”, which is a main concept of Marxism. She further contested the materialist dialectics theory by refusing the relation between society and science and technology. Clearly speaking, the arguments were made to suggest acceptable compromises between contending positions. Haraway stated that irony, the main argumentative style she used, “is about contradictions that do not resolve into larger wholes, even dialectically, about the tension of holding incompatible things together because both or all are necessary and true”.

She adapted concepts from materialism, socialism, and feminism and post-modernized them to form an alternative that she deems not “totalizing” and does not miss “most of reality”. Nevertheless, to arrive at this alternative, she had to debunk certain theories or to call “assumptions” like Marxism into question. I can see in the essay that it does not have an explicit thesis. I think the essay is all about post-modernity, of adapting varying concepts and meanings. Moreover, it attempted to discuss a wide range of issues from religion to sexuality.

Being a post-modern, the struggle for change is fragmented which means it can be done through a variety of perspectives and means. The thesis statement could be cyborg politics will make way for a “powerful infidel heteroglossia. ” Cyborgs do not come to existence through human reproduction, it is post-modern and is “outside the salvation history”. It is a suitable term to use to when creating a post-gender world; this is why it was used as a metaphor to support the author’s proposal.

As mentioned above, irony was used as an argumentative style because since it is a product of contradictions that were not resolved, it supports Haraway’s manifesto in compromising contradicting ideas. The term “cyborg” has been mentioned many times in the piece and it has been used in 4 different ways, it “is a cybernetic organism, a hybrid of machine and organism, a creature of social reality as well as a creature of fiction (p. 149). ” There are many suggested meanings of the word cyborg in the essay.

It was used differently on various parts of the manifesto. Haraway had implied different meaning of cyborgs in the essay aside from the ones she specified. She implied vagueness to word. She referred to it as something we could only see in the distant future but she also considered all of us as cyborgs. Reference: Haraway, Donna. A Cyborg Manifesto: Science, Technology, and Socialist-Feminism in the Late Twentieth Century, in Simians, Cyborgs and Women: The Reinvention of Nature (New York; Routledge, 1991), pp. 149-181.

A Reflection of the Cyborg’s Manifesto. (2016, Aug 15). Retrieved from https://studymoose.com/a-reflection-of-the-cyborgs-manifesto-essay 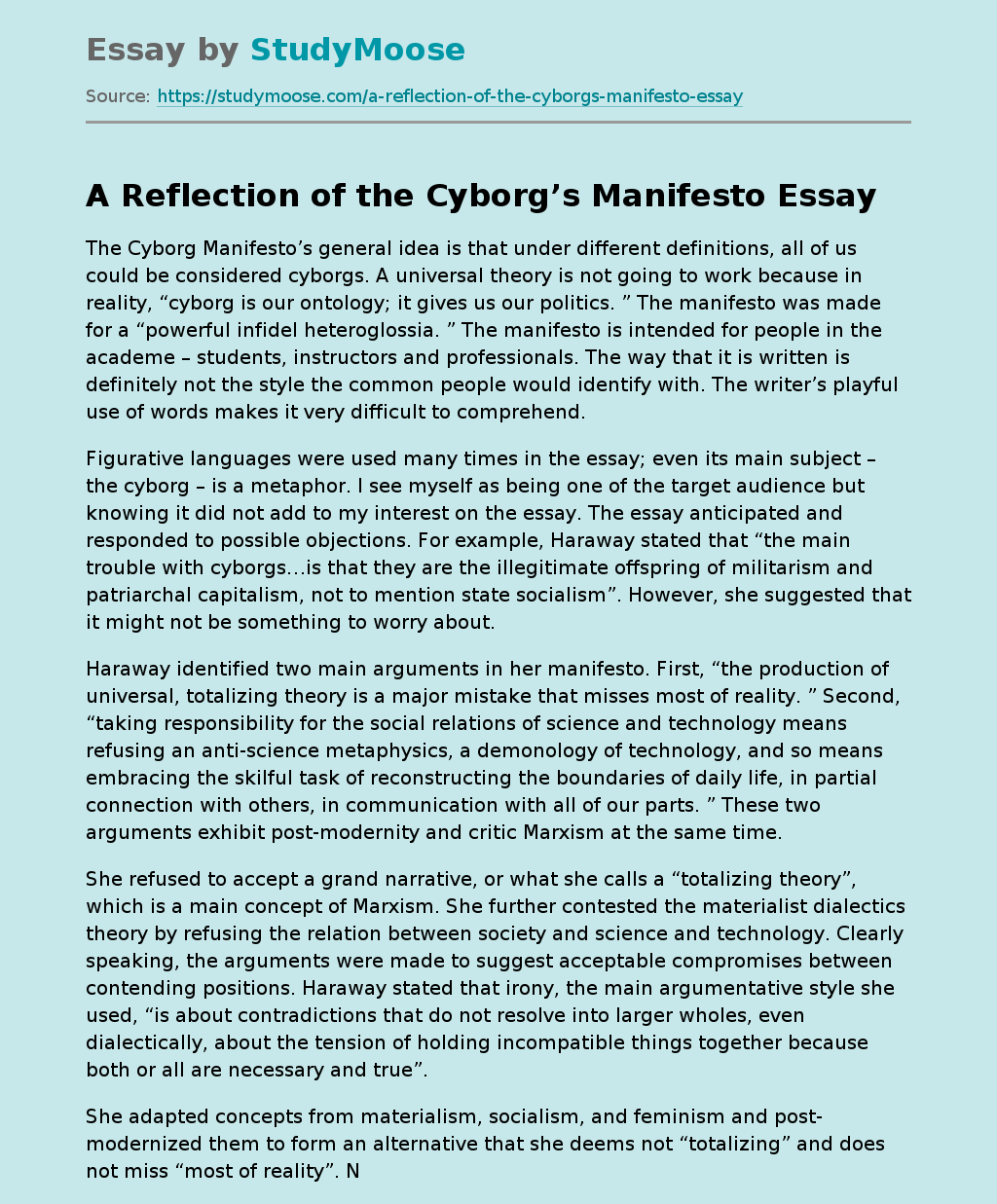