A New Kind of Dreaming by Jamie Riley

Jamie Riley changing for the better throughout the novel ‘A New Kind of Dreaming’ is thanks to many of the events throughout his stay in Port Barren. The courts sending Jamie to Port Barren on Isolated Care, I find, is the best thing they have done for him. Even though he was targeted, threatened and set-up, he managed to endure it, and come out the other side a better person. He can only owe it to Port Barren and its people for the turnaround in his life.

Don't use plagiarized sources.
Get Your Custom Essay on A New Kind of Dreaming by Jamie Riley Just from $13,9/Page

Jamie’s poor attitude and behaviour issues are no fault of his own. They are at the fault of both his father and late mother. His mother had passed when Jamie was quite young, and his father was of no use either, ‘…usually too pissed to worry about anything, particularly the boys.’ Having no parents meant that both Jamie and Eddie could do whatever they like and not have to reap the consequences. Jamie and Eddie both took full advantage of this situation, and it hasn’t done either of them any favours.

Eddie is now behind bars, still with no concept of the severity of the situation. He just continues to think that it doesn’t matter, that he will get out and go and find Jamie in Port Barren and they’ll live happily ever after.

This attitude of Eddie’s plays a major part in influencing Jamie, especially because Eddie is the only person Jamie can look up to, and he isn’t what I would call a ‘good influence’. So as Jamie carries this attitude into Port Barren, he cops a bit of shit for it. As soon as he arrives in Port Barren, he stops dead still in the road with shock, as if ‘something bad, something evil had reached out and touched him as he crossed the road’. After this little incident, mid-way thru a conversation between Jamie and his social worker Lorraine, a comment she makes, startles Jamie a little bit ‘This is it, Jamie. This is your last chance.’ As much as he had heard it all before, he knew that for some reason, this actually was his last chance.

Being Jamie’s last chance, before Jail, he’d been putting in the hard yards. He was attending school, and had become quite close with Cameron, who was becoming more and more like a brother as the story unfolded, and had settled at Archie’s. Often, of an evening, Jamie would go for long walks, to think, and occasionally to release some ‘steam’. However, on the way back from one of his regular walks, after seeing Butcher burning the school down, Butcher followed him home, and just before Archie’s stopped Jamie; blamed him for burning the school down. Jamie tried to defend himself, but Butcher just smacked him over the back of the head with his Nightstick and threw him in the back of the police truck. After a torturous ride in the back of the police truck, Butcher deserted Jamie at an old Mining Station, Flaherety’s Curse, handcuffed to a retaining pole.

Cameron managed to decipher where Jamie was, however, another visit from Butcher, he smashed Cameron’s Father’s car into the Mining Hut, and left. Which meant if the boys even wanted a chance of survival, they’d have to hike it back to town, a very strenuous journey, especially after all of Jamie’s experiences. The boys found the previous person Butcher had left out there, who was unlucky enough to have died out there, and they bought her skeleton back too. After their near-death experiences on their travels, and being struck with pure luck, of finding a watering hole and two recreational hikers, who gave them a ride back to Port Barren, they made it back. Butcher, furious with the news, made a beeline for Archie’s house, in search of Jamie, and after a call from Cameron, he made for his sacred place, the boat.

Butcher, eventually finding Jamie, set the boat alight, and upon Jamie’s escape from the inferno, held him at gunpoint. Thanks to some ingenuity from Robb, Cameron and Archie, they managed to make it before it was too late, and Robb shot Butcher in the shoulder, saving Jamie’s life. They made contact with the Karratha Police, and had Butcher arrested and charged. Once all the fuss was settled, Jamie returned to Archie, and in reference to a story Archie had told Jamie, he asked if he was a wanderer or a lost one, and Archie’s reply was ‘Neither mate, you’re a local’. This was a massive milestone for Jamie.

Clearly Jamie realises that he needs to ‘pull his finger out’ or he has had it. This is shown right throughout the novel. Jamie does well at school, offers to give Archie around the house occasionally and he is off the streets. He feels different, usually when he was sent to Foster Homes, they’d all smother him, and nurture him, and treat him like an idiot, however, Archie’s was different, he had the freedom to do whatever he liked, but most of the time, he’d be controlled; he’d stay at home, and sleep or study. Also, throughout his stay in Port Barren, he felt as if he had a Guardian Angel, constantly watching over him and speaking to him. In the words of the narrator, ‘The girl’s presence filled Jamie. She’d been watching him, helping him, calling him, ever since the moment he’d stepped off the bus and into Port Barren.

I find that Jamie is also very grateful for the experiences throughout his stay in Port Barren, as good or as bad as they were, because if it wasn’t for them, he’d still be the same juvenile delinquent he’d come as, and for all we know, could’ve ended up in Prison with Eddie.

A New Kind of Dreaming by Jamie Riley. (2016, Aug 10). Retrieved from https://studymoose.com/a-new-kind-of-dreaming-by-jamie-riley-essay 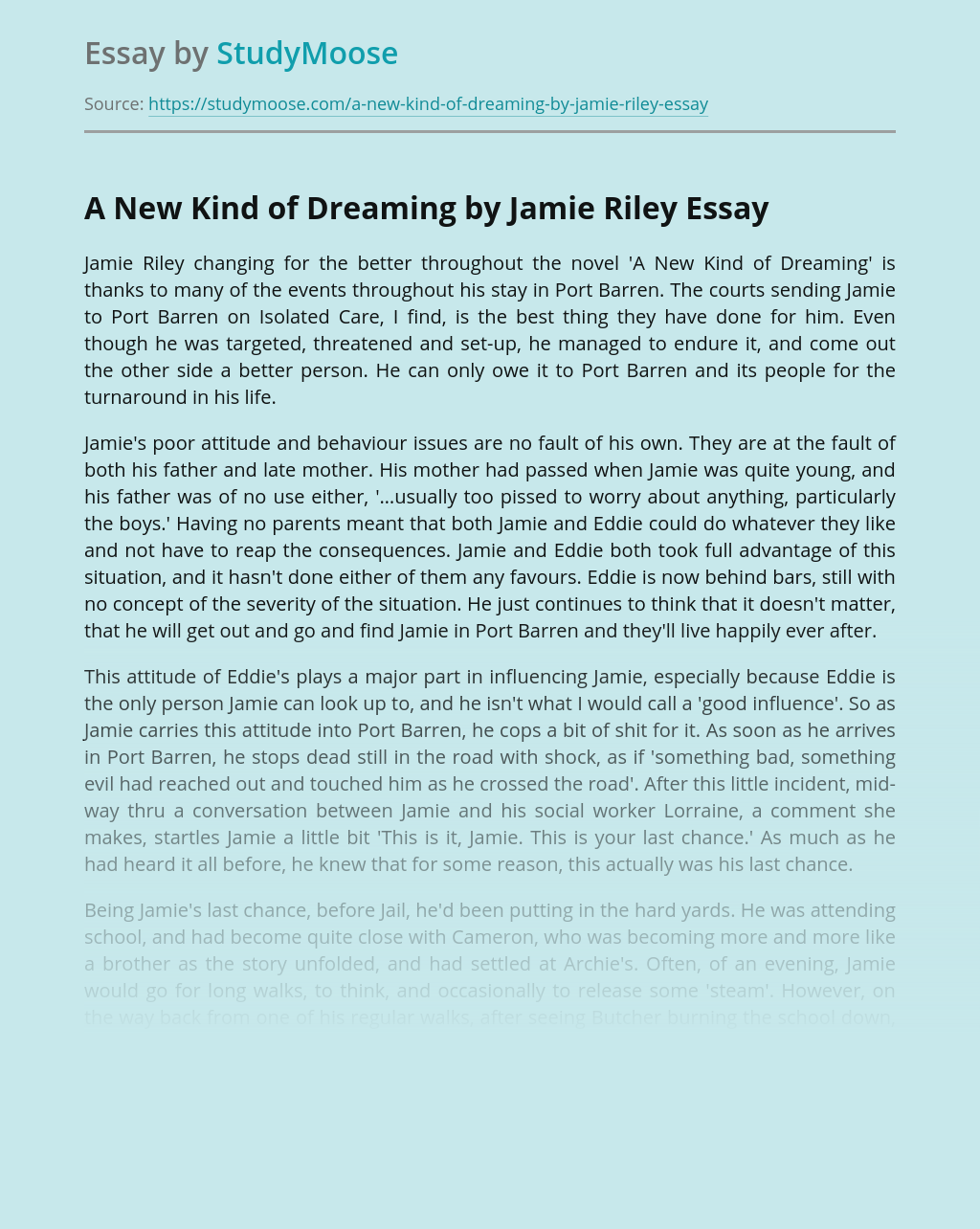 Describe the characteristics and cause of challenging behaviour

Case study 1 In case study 1 Winston is physically aggressive. However over recent months he has become very withdrawn, extremely grumpy and agitated. In the case study it says how Winston wife known as Ruby was assisting him to get ready for bed when he lasted out punching her in her chest. This shows...

Jamie Riley changing for the better throughout the novel ‘A New Kind of Dreaming’ is thanks to many of the events throughout his stay in Port Barren. The courts sending Jamie to Port Barren on Isolated Care, I find, is the best thing they have done for him. Even though he was targeted, threatened and...

View sample
Understanding and Managing Behaviour in the Learning Environment

As teachers, we have a duty of care to understand and be aware of the current legislation that can have an influence on the management of behaviour in the learning environment. Managing behaviour is an area that can determine that all learners have the right to achieve; therefore, it is important that we understand the...