"Hotel on the Corner of Bitter and Sweet" by Jamie Ford

One should not stop going for what they desire. Through the struggles and barriers being thrown at 2 people who are in love but the others might not be able to see it, they will constantly find a way back to each other. This book demonstrates the hardship two young people who are in love to discover a way to each other despite the fact that at the time, interracial dating was not very typical and looked down upon.

Throughout the Japanese internment in WWII, Henry, who is a first-generation Chinese American, went to an only non-white school was forced to work in the kitchen throughout lunch and tidy after school because that was how his “scholarship” was being spent for.

Don't use plagiarized sources. Get your custom essay on
“ “Hotel on the Corner of Bitter and Sweet” by Jamie Ford ”
Get custom paper
NEW! smart matching with writer

At that school, he met a Japanese-American girl called Keiko and became friends immediately. Despite the fact that Henry’s father was not very fond of the “enemy” Japanese people, that did not stop Henry from being her pal. One night, both Henry and Keiko snuck out to see each other.

When they saw each other, Keiko provided him her household pictures because all Japanese needed to eliminate any possession that might connect them being referred to as Japanese so they could prevent being eliminated.

Japantown was filled with households and businesses who were forced to close down and delegate the more secure internment camps. Henry had to go through that discomfort of seeing Keiko’s entire family leave, he was defenseless to stop them but at the same time afraid that he would be rounded up with them for his comparable physical look.

Because it was a tradition for the Chinese to send their children back to China to complete their schooling, that is what Henry’s father did. He sent him back to China. He agrees to go if his father saves the Panama Hotel where Keiko’s family stored a lot of their belongings when they were shipped to the internment camps. While sending letters back and forth letters to Keiko, that is how Henry met the women he ended up marrying, Ethel. She worked at the post office and befriended him. As the war was going on, Keiko’s letters stop coming. The only reason why Keiko’s letter stops coming because his father interfered with the delivery of the mail for Henry’s own good. That is when Henry eventually moves on with his life, finishes school and marrying Ethel, but does not forget about Keiko. After the wife dies of cancer he tries to find meaning for living. By doing so he goes back and visits the last Japanese habitation, which was the Panama Hotel. He never really forgot about Keiko, that was his first love. Even though Henry’s son, Marty, and Henry were not close, slowly but surely he eventually told him about Keiko. Marty and his fiancé go out finding Keiko and sends Henry to New York to be reunited with his first love, Keiko.

Being in Henry’s father’s shoes, I could see why he stopped the communication between Henry and Keiko. He was really just doing what is best for his children. At that time interracial relationships were not common but I guess nowadays parents cannot really choose who is going to marry their children. You cannot help how you feel and when you feel a certain way you will do whatever it takes to be back with the one you love. I think it was so cute how Keiko and Henry sent letters back and forth, nowadays it is only text messages or snapchats being sent. There was no sentimental feeling like there was before. Now we rely on technology as our form of communication and that is why some relationships fail.

It is hard bringing your culture to America especially when you want to live the American lifestyle or culture. I know Henry’s father did not want him speaking Cantonese at home because if he spoke English, he would be more acceptable as an American. He was proud that Henry was going to an American school but of course he was not going to let some of the traditions go so therefore sends him to China. Henry’s father’s morals are very different with Henry as he grows up to being a father. When Henry has a son who is planning on marrying an American girl. At that time, dating outside the race is more acceptable. With me dating outside the Filipino race, my parents are okay with that. To them race does not matter. What matters is how the other person feels about you and vice versa. One that cares for you, takes care of you, and how they treat you should be the bigger concern and not the race. I always thought I would have to date within my race because I know that is what my parents would want, but they told me race should not matter. It is just how the other person can make you feel that matters the most. As long as I am happy, my parents are happy. I wish Henry’s father saw that Henry was happy with Keiko, but since his father was not very fond of the Japanese, he did everything he can for them not to keep in contact.

The story ends on a sweet note. The first thing Henry says when they meet was a Japanese phrase to tell her how beautiful she was, that he learned when he was a boy. Through the search from the city and pain and memories Henry had in the past, finding Keiko was the main purpose in his life. He wanted to be rekindled with his first love again.

Hotel on the Corner of Bitter and Sweet did a good job at alternating between telling the story at adolescent Henry’s war years with his later life in 1986. The author manages to tell the story of the Japanese evacuation, of the struggles between generations in immigrant families, and of the friendship that later turned into love between Henry and Keiko. This book also tells an important story, that of the internment of Japanese-Americans during World War II and it was heartbreaking to watch Keiko’s family as they were evacuated, despite the fact that her family was more “American” than Japanese, and that Keiko was born in the U.S. Keiko’s frustration at seeing those of Japanese heritage taken away and her family’s strength as they are forced to leave behind their entire life is hard. I cannot image being taken to an unknown place with my family because of who we were. I liked how the author incorporated the generation of Chinese-American Henry and his immigrant parents. Henry’s father demands that he speak only English in their home, despite the fact that this leaves Henry unable to communicate with his parents but be more acceptable to the American culture. This book was overall a touching book. It was more than a love story between two people, it was the hardships that was going on during the WWII that kept those two from being with each other and with Henry’s father stopping communication between Keiko and Henry. I had mixed emotions because I was happy they found their way back to each other but at the same time I was upset because I wanted to know what would happen next.

"Hotel on the Corner of Bitter and Sweet" by Jamie Ford. (2016, Feb 27). Retrieved from https://studymoose.com/hotel-on-the-corner-of-bitter-and-sweet-by-jamie-ford-essay 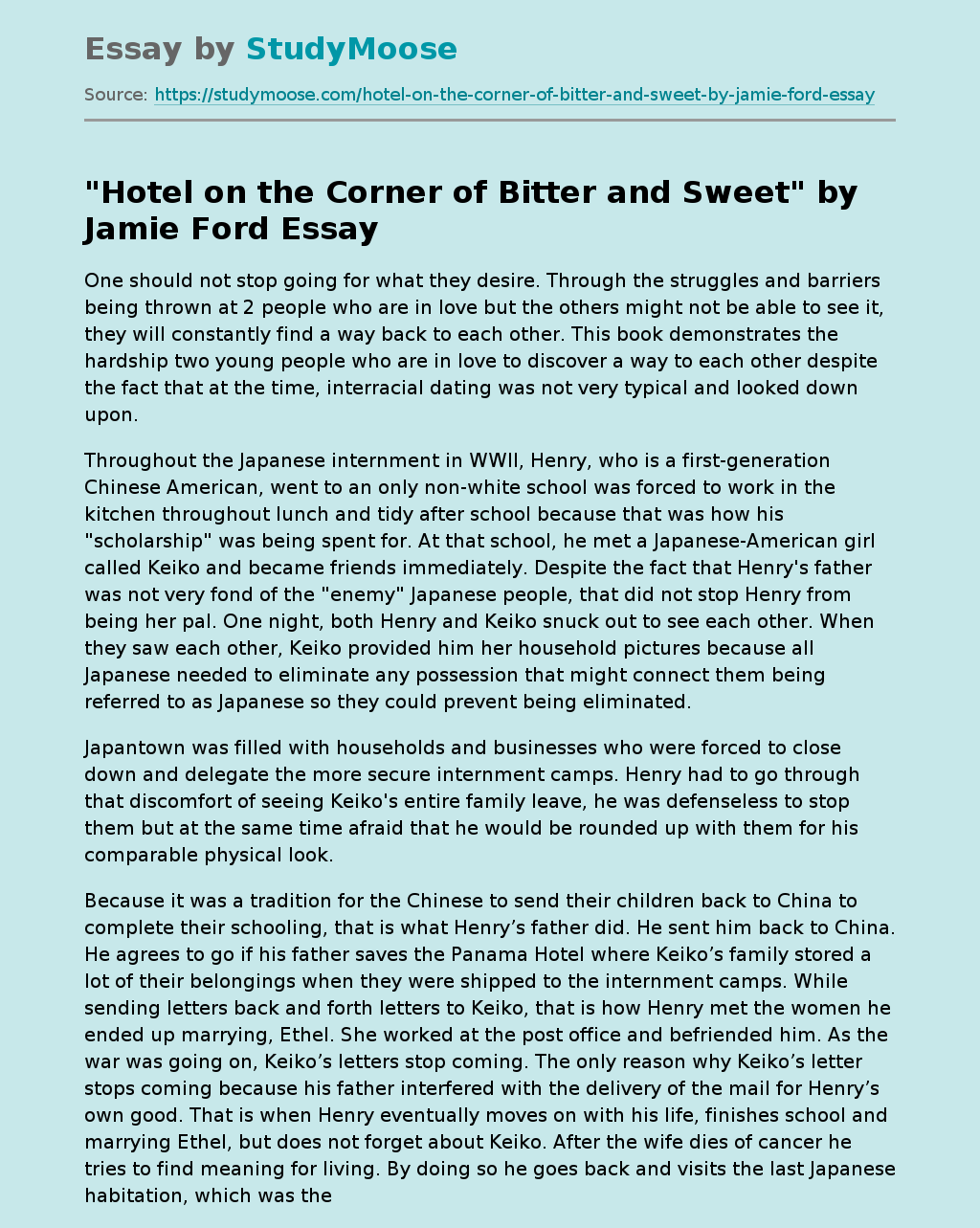