“A Love Song for Bobby Long” written by Grayson Capps and “The Love Song of J. Alfred Prufrock” written by TS Eliot remind the world of men who struggle with the demons of life. The little voices in your head saying “I don’t think you can do that.” These voices cause you to doubt yourself and your talents. They take the life out of you, and cause you to wonder if you even have a purpose here on earth. Now let’s take a deeper look into these poems and closely analyze their similarities and differences.

Turn in your highest-quality paper
Get a qualified writer to help you with
“ A Love Song for Bobby Long Analysis ”
Get high-quality paper
NEW! AI matching with writer

Bobby Long, a handsome football prospect who possessed the talent of superior acting, was a man who was known for wasting his talents and making the wrong decisions. He chose a “road less traveled” : a path through life that many people tried to avoid. He was a drunken old man who looked back on life, not because he could change his decisions, but because the people around him wish he had made smarter ones.

Years pass, and he finally realizes how his poor decisions led him to the black hole he is now stuck in. A hole dug so deep that he can’t see outside of it. It’s all dark around him and he feels all his problems will be solved when he is finally six feet under.

Prufrock won’t build the courage to go up to someone he likes, but only because he lacks Charisma. He lacks the confidence needed to go and be the courageous man he once was.

He can no longer find what he needs or wants and he feels it is the end of the world, with no hope left in him. He realizes he is reaching a point where he is coming to anempty closure. He wants the answers to his unknown questions but he second guesses his every move. Does she like me? Does she not? These questions linger in his mind but they will never get answered because he never builds the courage to tell the women he likes or admires. Instead, he just gets wrapped up in the scent of their perfume and the sound of their voices, behind their masked face. He realizes nonone is perfect and everyone makes mistakes However, he wants to know his own and wonders why he was possessed with unfortunate events. He just wants answers. Answers to questions he doesn’t even have the courage to ask…

In both poems, the main character, or speaker is referring to themselves as a low life failure. They don’t ever build the courage to face their inner demons. They never realize their true talent, instead just doubt themselves, even when people give them compliments that come from the heart. In their eyes, they will never be good enough. They will never be the ideal husband, but instead, just the weird man everyone points to and laughs at.

In Bobby Long’s love song, he realizes he isn’t the ideal husband; however he still womanizes the women and doesn’t care, as long as he never gets sexually frustrated. However, Prufrock struggles with even approaching a woman. His nerves get the best of him and he cannot build the courage to approach her and aska her the tough question. Bobby Long struggles with the confusion of not being able to pick sides (between the devil and God.) He suffers from the struggle of being able to make the right decions, or which to follow. Prufrock struggles with his inner demons. He is his biggest enemy. He causes himself to suffer and keep wondering. Wondering why he could never be the leading role in his own life. He wonders why he could never be “Prince Hamlet.” Then later realizes maybe he just was never meant to have that role.

In Bobby Long and Prufrock’s life, they doubt their ability to be great. They feel that they have reached the end of the world therefore why try? They are giving up on life just because of a few misfortunes and bad decisions. They will never be satisfied with themselves until they are gone forever, or dead. No matter how other people view them, they both believe they were never meant to be the star of their OWN life, but instead a role player who no one really pays attention to. 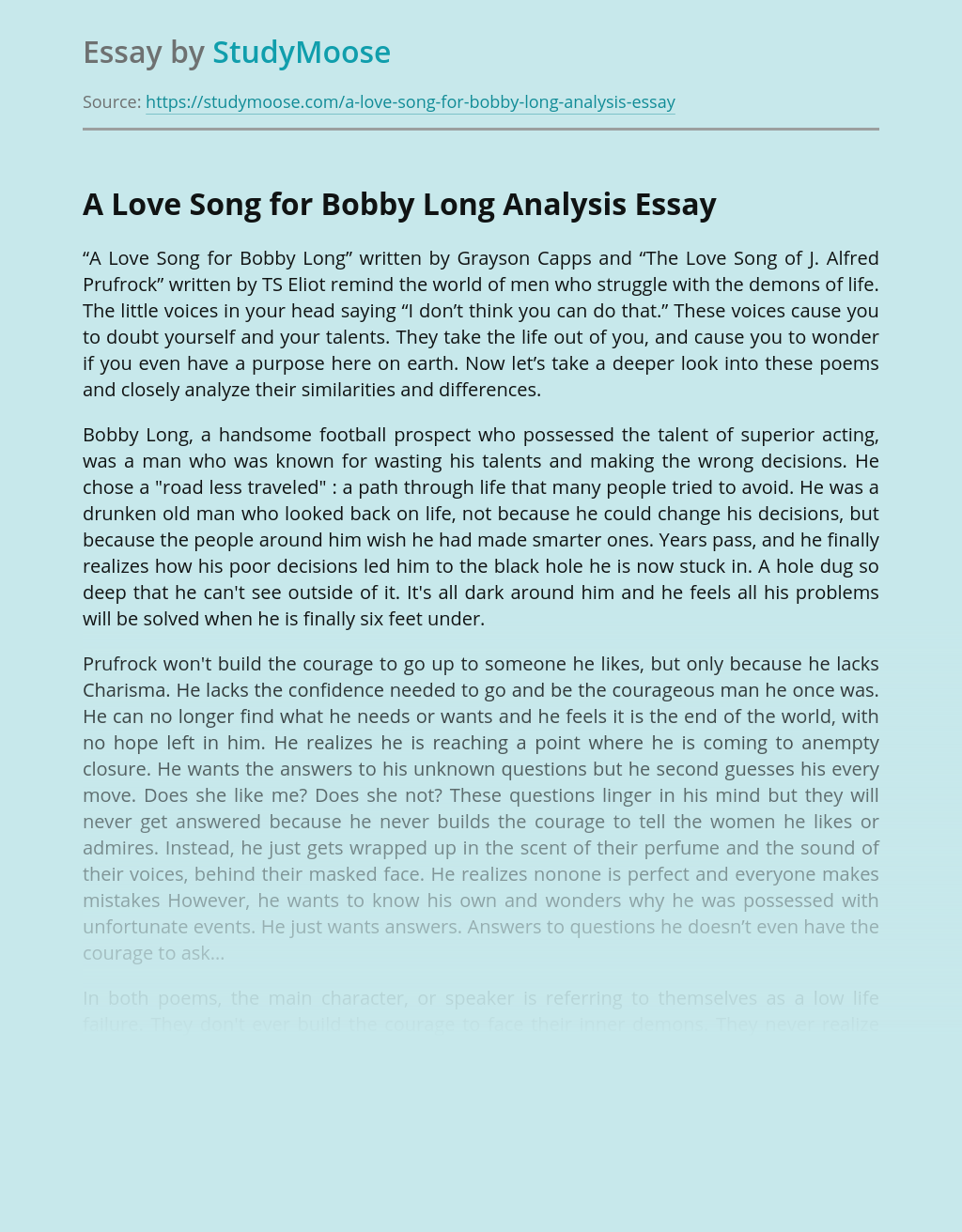 Turn in your highest-quality paper
Get a qualified writer to help you with
“ A Love Song for Bobby Long Analysis ”
Get high-quality paper
Helping students since 2015
Stay Safe, Stay Original