The short story, “My Father and I” mainly revolves around the journey of a father and son into the countryside on a fine sunny day. The journey that they went on to took until darkness set in and the view that they saw during daylight shifted from beautiful sceneries to a horrible, at least in the eyes of a child, dark collage of figures.

The story showed how beauty can turn into fear once one element went out, in this case, the light.

Don’t waste time
Get a verified writer to help you with A Critical Analysis of Par Fabian Lagerkvist’s “My Father and I”
Hire verified writer
$35.80 for a 2-page paper

It also shows the difference in the way of thinking between the father and the child wherein the child was so terrified while the father was as calm as he is.  This is evident in the part wherein both of them were passing through the stream where the child was as puzzled as to why his father acted as if he felt nothing while the child was very much afraid. The child went on to realize in the end of the short story that, like he has, his father also has fears: only that the fear that it is the fear of the things that his father does not know.

The author made his point by taking the point of view of a little child who is naturally curious of the things that go around him. In the short story, the son is the one that narrates the whole story and it is his thoughts that the audience sees. This made him as the main focal point that the author used.

This way, the curiosity that is evident in every child is played upon by the author to effectively deliver a point of realization wherein the boy itself answered much of his questions.

The father on the other hand is the one the author used to depict the natural concern that every parent has with their children. The actions of the father show him being protective and a motivator when his son was getting terrified of the darkness. The father also plays a major part in the climax wherein he himself felt fear for his child after a train came in and almost hit them. The faith that he has in God somehow is the factor that also made the child calm yet puzzled.

Lagerkvist efficiently made use of descriptive ways in painting out the scenes in the short story. The narration of every detail was intricately laid out in order to obtain the proper intention in every part of the short story. His descriptions were so vivid that the reader may feel as though he was actually walking alongside the father and son on the railroad tracks all throughout the story.

The structure and the plot of the short story are pretty much divided into two specific and distinctive scenarios. First is the image of the railroad track and the environment around it. The author describes every detail that is necessary in order to picture out the place and how the place is lit up by and also the manner it reacts to the sunlight. It basically describes for the reader to appreciate the beauty of the countryside and the harmony of the world they both are in evident with the first train scene wherein his father knows that the train who’d passed by was a colleague of his.

All this was changed after darkness set in at the countryside and the father and son went their way back home wherein the second main scene sets in. In this particular scene, all the main components that were described by the author during the first main scene met its opposite as the amount of light that was present before went gone and the effect made a gloomy picture that is terrifying for the child. The mood in this story then on went from calm during the first scene to become tense at the second scene especially in the part wherein an unknown train from absolutely nowhere popped out of the scene and even terrified the father.

In general, the short story is an effective manifestation of the unconditional concern of parents for their children. The bond that was formed out of the situations in the short story made the child to realize the purpose of everything that happens around them and that the greatest fear that anyone has is the fear on things we do not know.

A Critical Analysis of Par Fabian Lagerkvist’s “My Father and I”. (2017, Mar 31). Retrieved from http://studymoose.com/a-critical-analysis-of-par-fabian-lagerkvists-my-father-and-i-essay 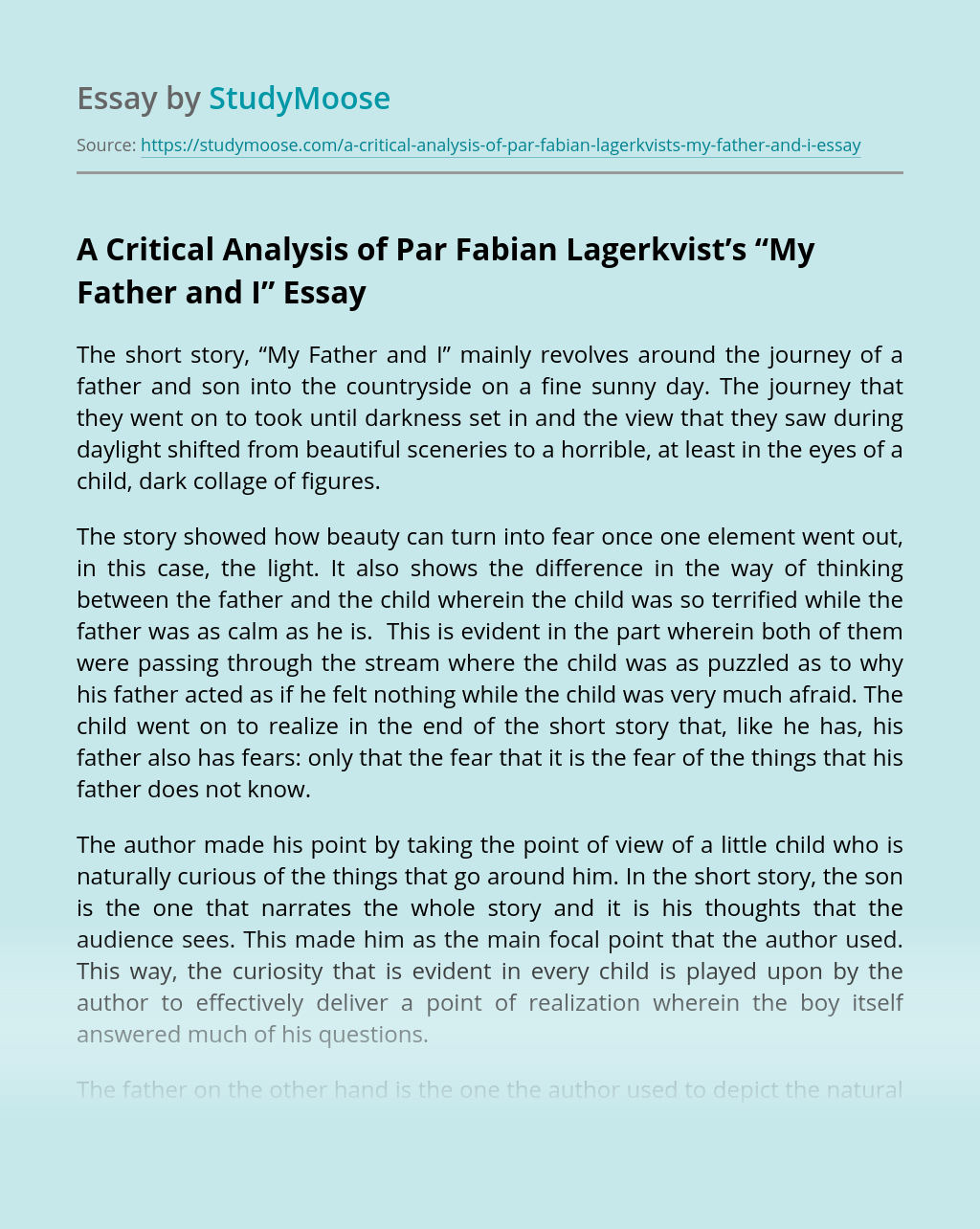 Don’t waste time
Get a verified writer to help you with A Critical Analysis of Par Fabian Lagerkvist’s “My Father and I”
Hire verified writer
$35.80 for a 2-page paper
Stay Safe, Stay Original