Today, the depiction of war is becoming more vivid and realistic. Audiences are more critical of how a move catches the actual events that transpired and of how they can relate to the emotions in the movie. The movies “Saving Private Ryan” and “We Were Soldiers” are two of the most popular modern day films with the subject of two different wars, World War II and Vietnam War respectively. They have similarities in many aspects However, they have even more differences.

Turn in your highest-quality paper
Get a qualified writer to help you with
“ A Comparative Film Review ”
Get high-quality paper
NEW! AI matching with writer

When Duty Calls: A Comparative Film Review There has been much development in the movie industry since the onset of computer graphic imaging. This technology has enabled producers to depict subjects that were considered impossible. Today, humans are capable of transcending limitations on time and cultural differences. They can reenact historical events, reconstruct buildings, and recreate natural sceneries.

Equipped with a blue screen, computers, and actors, an entire war can commence right before an audience. With both simple and complicated movie techniques, anything is accomplished.

The movies “Saving Private Ryan” and “We Were Soldiers” share a common subject – and this is war. This topic has interested the curiosity of millions of viewers since time immemorial, as those who have witnessed it want to confirm the events and those who did not wish to learn the events. Both tackled common themes and presented different angles of a war.

They share many similarities and possess many differences. But there is one significant aspect that both these movies have successfully translated. This is the price that war claims to those it chooses to affect (Spielberg, 1998; Wallace, 2002).

Both stories of these masterpieces were derived from two of the most engaging events in the history of mankind. Saving Private Ryan was based on the life of a real individual named Sergeant Frederick Niland, a United States paratrooper sent to France on D-Day. We Were Soldiers, on the other hand, is a version of the book written by Lieutenant Colonel Harold G. Moore and Joseph L. Galloway about the military engagement in the la Drang Valley in 1965. Both contained fictional characters and modified events, but little truths must be altered in order for the actual truth to emerge (Spielberg, 1998; Wallace, 2002).

Saving Private is neither a biopic nor a tale of heroism. Its story is a protest against the wraths of war and how humans condemn it. It has clear anti-war sentiments, as characters struggled through the horrors of war and suffered both insanity and distraught. The D-Day amphibious invasion at Normandy was an excellent prologue to the film. It had brutal depictions on the consequences of being a soldier, on the gruesome reality of battles, and the uncertainty of life. It is a story of comradeship, of realization of fears, and living an inch away from death (Spielberg, 1998; Wallace, 2002).

In addition, We Were Soldiers is a film that shares absence of political themes of war. The primary objective of both movies is to relay to the audiences the lives of soldiers as soldiers, who are entities that can be separated from the entire picture of military and political debate. They are men who chose to be in the line of duty and take arms in order to fight for what they believe is righteous. But We Were Soldiers portrayed a relatively more intimate aspect, the scenario of the soldiers’ relationships with those they left at home.

It prudently conveyed the lives that soldiers have before they leave for an assignment and after they have accomplished their missions (Spielberg, 1998; Wallace, 2002). In the sequence where Mel Gibson with Madeline Stowe and Chris Klein with Keri Russell were spending their last night together prior the soldiers’ departure for war, the intense emotions were effectively depicted. It relayed the fear being contained when lovers are being parted without any assurance of reunification. It is a scene where there is pain because of the uncertain.

Another important aspect of war that this movie portrayed was not only the lives of men in the battle zones, but also those of their families awaiting their return. In the scene where the women would gather together and watch television for updates, one would feel the intensity of fear that these women are trying to suppress within. They would not want to cry until they hear something concrete, but just the prospect of losing their husbands is cruel. Every knock on their door was a possibility of the word that they have lost their beloved men (Spielberg, 1998; Wallace, 2002).

Both movies focused on a hero, an officer of a military unit. Tom Hanks was the captain in charge of a platoon assigned to search for Private James Ryan while Mel Gibson was also the captain leading his men through Vietnamese jungles. In Saving Private Ryan, heroism is to fulfill one’s duty, regardless of its nature. As long as it contributes to the efforts of war, and that it is a soldier’s mission, then one is to be considered a genuine soldier. In We Were Soldiers, heroism is making a decision, although detrimental for a certain number of people but crucial for the entire outcome of the war.

Saving Private Ryan was not a film about a country’s victory or defeat. It is a story of personal victory in one’s struggle to maintain his conviction amidst a world gone half mad. We Were Soldiers, in contrast, is about how a military unit lost a critical battle and most of the men involved (Spielberg, 1998; Wallace, 2002). Both shaped the American understanding of the realities of war. Because of these movies, the public has learned to further their appreciation of the sacrifices that men in uniform give in order for peace to prevail.

The price is clear, their lives and the structure of their families are put in the line of fire each time they board the helicopters or boats in order to fight in the beaches or jungles. Both movies gave significance to the human side of war, concentrating on the people that comprise a war and how a war shaped these people (Spielberg, 1998; Wallace, 2002). 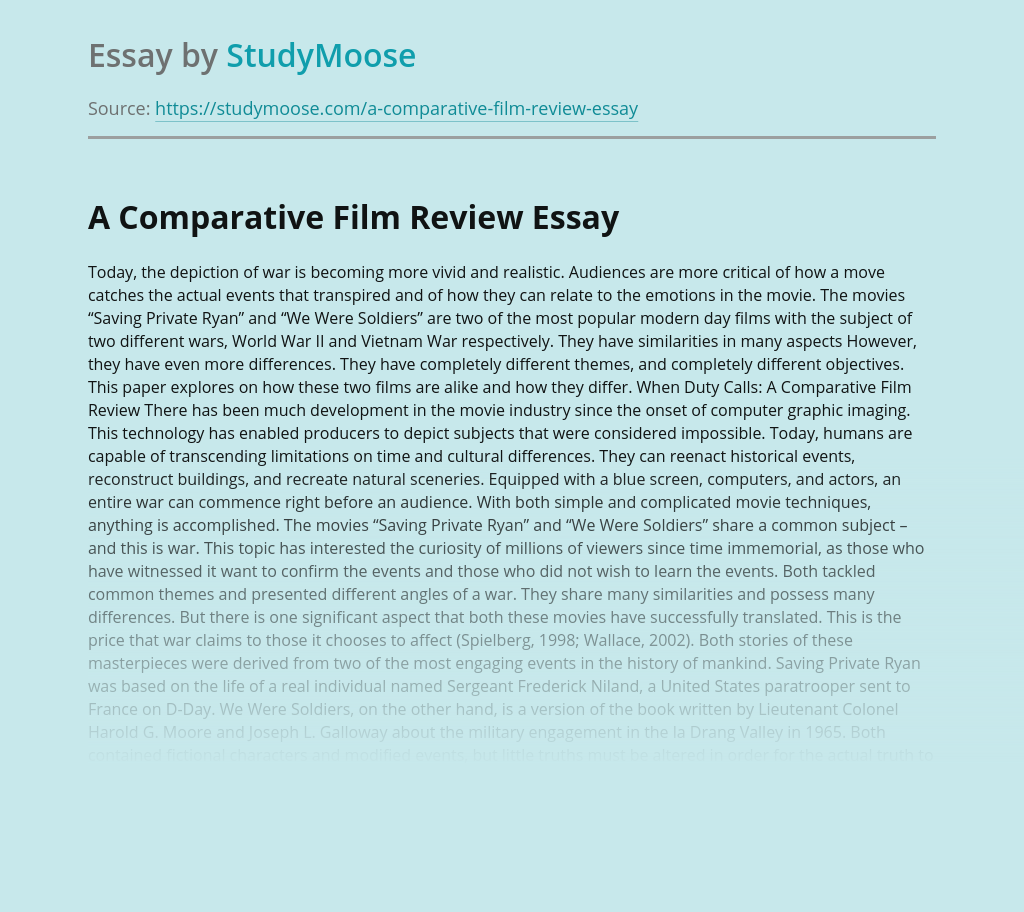 Turn in your highest-quality paper
Get a qualified writer to help you with
“ A Comparative Film Review ”
Get high-quality paper
Helping students since 2015
Stay Safe, Stay Original