Google in 2000 developed a Chinese language version that the Chinese could use freely. Two years later, the government blocked the search engine because this latter did not change the findings. In 2004 the government decided to release the site but users could no longer access sites such as political movements. Google has complied with its own accord to remove all sites that should be censored according to the laws imposed by the Communist Party of China. Many words have been banned also in research, such as Hypocrite, Human Rights, Democracy…

Turn in your highest-quality paper
Get a qualified writer to help you with
“ A Chinese Language Google Version ”
Get high-quality paper
NEW! AI matching with writer

But also “being a Googler means holding yourself to the highest possible standard of ethical business conduct.” The information is readily available for everyone who has access to Internet, without find useless information and the product must be universally accessible.

While many companies have ethical codes to govern their conduct, Google claims to have made “Don’t Be Evil” a central pillar of their identity, and part of their self-proclaimed core values.

In 2006, when Google declared their self-censorship move into China, their “Don’t be evil” motto was questioned. Google’s CEO Eric Schmidt explained that sometimes it might need to allow smaller evils for a greater good. However, Google has since challenged China’s censorship policies on various occasions.

DO YOU THINK GOOGLE SHOULD CENSOR SEARCHES IN CHINA? WHY?

Google was criticized a lot by international newspapers about ethics codes. _The Financial Times_ asked to the company if they don’t feel guilty about the situation and if they aren’t becoming evil with censoring researches within China.

The same year, Google opened offices in China because from a financial perspective, this country represents for the company a dynamic, fast-growing and increasingly competitive market.

I think there is not a question of being evil or not. Google is maybe a leader in the world (it ranked in 2005 the third position behind Johnson & Johnson and Coca-Cola), but it cannot take decisions in a country which is not its. The research motor has no power in that country controlled by a Communist Government which is very strong. It is more a problem of coherence from Google, because after reading its mission statement and understanding “Don’t be Evil useless”, we don’t understand the reason why they change their culture when they operate in another country. According to that mission statement and because some governments make the mission difficult to achieve, Google added to the balance a third fundamental commitment after having penetrated Chinese market: “be responsive to local conditions.” People thought that Google will follow its mission perfectly, doesn’t matter the situation or the location, and they were very surprised when they discover that Google made some censure by its own.

After the censure decision of Chinese Government in 2002, Google was not any more efficient, and every search had to pass though the “Great Firewall of China” software. That means Google News was never available, as also Google Images which worked just 50% of the time. A good point of Google is the importance of users’ privacy and it is related to users’ interests. But entering in China, Google’s decisions had to be monitored by the government; this changing of filtering all researches compromised Google’s missions.

It doesn’t matter to the company to be criticized, or if it lose people trust around the world, because the only thing they believed is to try to give to users the access to Google.com from within China. But Google had to face some more problems, others than the criticism. I mean, the censoring would really have affected the company search results, because if a user tries to search an ensured term, he would be re-directed to a non-censored site or the browser would stop. But Google risks a brand value damage.

To summarize, I understood that Google had no choice to become censured. It told it was its own decision because it didn’t want to argue with the Government, and it knew that it had no chance to win the fight. It is too important for the company to expand until China, that’s why the company accepted all the country restrictions and try to have a place in that market.

WHY DO YOU THINK GOOGLE DIDN’T WANT TO SUPPLY INFORMATION REQUESTED BY THE US GOVERNMENT IN RELATION TO THE CHILD ONLINE PROTECTION ACT? 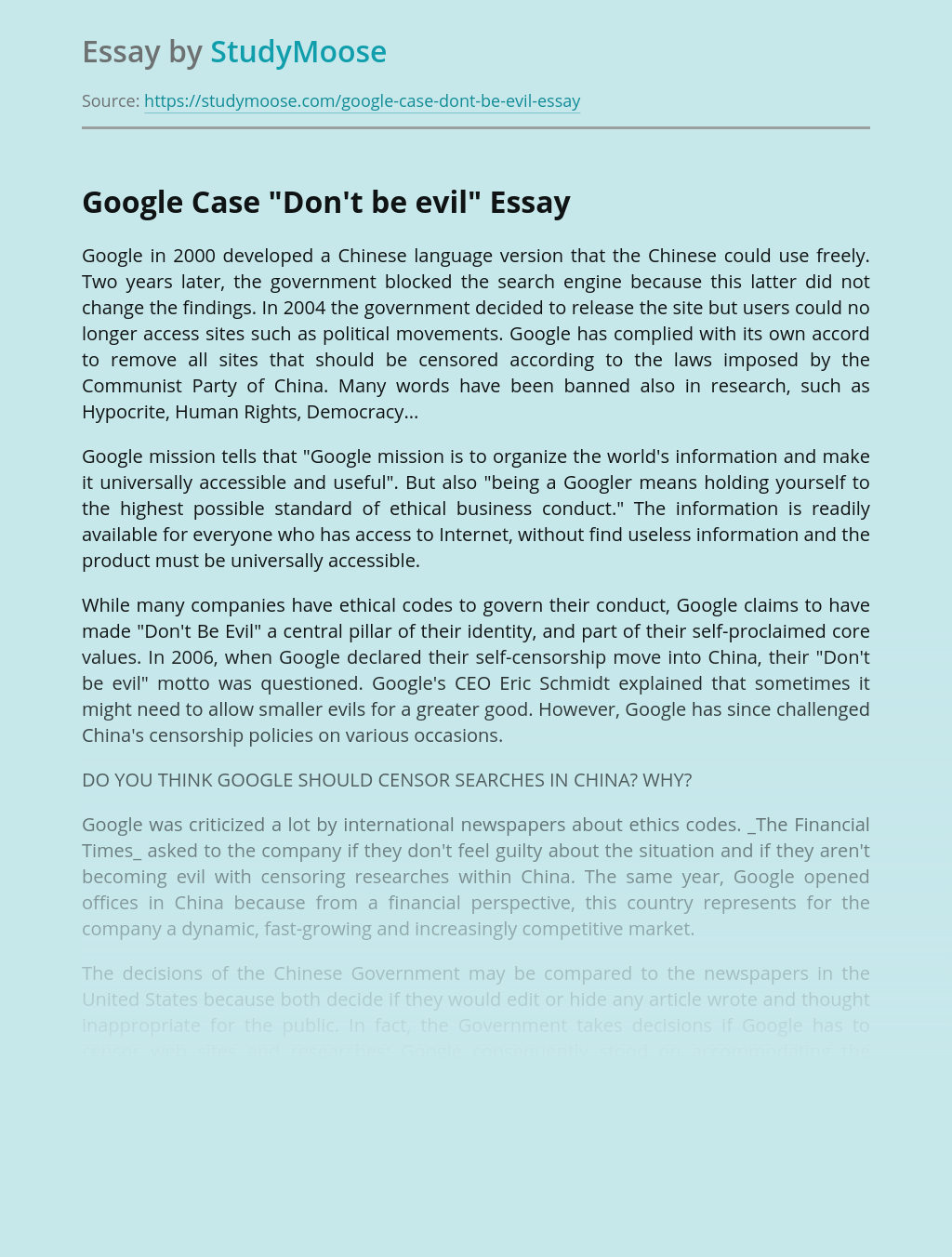 Turn in your highest-quality paper
Get a qualified writer to help you with
“ A Chinese Language Google Version ”
Get high-quality paper
Helping students since 2015
Stay Safe, Stay Original