A Child’s Voice as Reflected in Victorian and Romantic Poems

Child labor is one of the most sensitive and controversial issues today, as it is association with child maltreatment. Nowadays, children are entitled to several rights and privileges like the rest of a country’s population, which secure and protect them from all the possible abuses and maltreatments that they may experience. Today, people’s resentment and disagreement towards child abuse and child labor can be observed in campaigns, advocacies, television programs, and other kinds of promotional advertisements.

Yet, considering this, one may ask, did this societal issue exist during the medieval times, or is it a relatively young societal dilemma? If this issue indeed existed during the earlier times, how did people react to this and what did they do in order to fight this issue? In trying to address these questions, it may be very helpful to understand find out the answers within the messages of the early Victorian and Romantic poets who talked about issues like child labor during their time.

Don't use plagiarized sources. Get your custom essay on
“ A Child’s Voice as Reflected in Victorian and Romantic Poems ”
Get custom paper
NEW! smart matching with writer

The best examples of these Victorian and Romantic poems which reflect messages about child labor and abuse would be Elizabeth Barrett Browning’s The Cry of Children and William Blake’s The Chimney Sweeper.

The Cry of the Children expresses the poet’s resentment and bitterness towards the fact that there were children of her time who were exposed to such very grueling and physically challenging tasks and jobs that can only be done efficiently by adults.

The most predominant idea which covers Browning’s poem is the weeping of the distressed and miserable children. She describes in detail how painful, dark, and negative these children’s view of life has become because of the sufferings and pains they experience as they complete each day’s work.

She also reveals the insensitivity and cruelty of “tyrants” who never cared about these children’s rights and privileges, as reflected in these lines: “Our blood splashes upward, O our tyrants / And your purple shews your path; / But the child’s sob curseth deeper in the silence / Than the strong man in his wrath! ” (157-160). She expresses her hatred towards seeing these children weep out of exasperation and hopelessness in life. Comparing Browning’s work with that of Blake, her words appear to be more compassionate towards the feelings of abused children.

Her words also sound like she is attempting to debunk everything which tolerates and allows the forceful child labor acts which put the children of the society in such a very demoralized and downgraded situation. This is also one factor which makes her work more heartrending and emotionally-moving compared to Blake’s work. ‘The Chimney Sweeper’ by William Blake The Chimney Sweeper by the Romantic poet William Blake primarily talks about the life of children who are required by their life and economic status to work as chimney sweepers.

In a short and very simply-written prose, Blake reveals the feelings and perceptions of children towards an activity which adults consider as work but which they regard as their life. Comparing Blake’s work with that of Browning’s, it can be said that his poem appears to be a mere representation and reflection of the realities of these children’s lives as juvenile workers. He presents how such children consider hard-work and perseverance as the essential values they must possess in order to live. This idea can clearly be observed in these lines: “And so Tom awoke; and we rose in the dark / And got with our bags & our brushes to work.

/ Tho’ the morning was cold, Tom was happy and warm; / So if all do their duty they need not fear harm” (20-24). In a lot of ways, Blake’s poem does not reveal and expound much on the emotional pains and sufferings the children felt as much as how Browning’s poem does. Blake’s The Chimney Sweepers provides the impression that it only depicts what chimney sweepers do and how they feel about working hard, unlike Browning’s explicit emphasis on the maltreatment and abuse aspect of child labor. Comparing Victorian and Romantic Poems’ Sympathy on Child Labor Cause

Although Browning represents the Victorian genre of literature and Blake, on the other hand, the Romantic field, the entirety of both genres cannot be judged and evaluated by looking at the works of these two poets alone. However, if the works of Browning and Blake would be used as the basis of comparison, it can be said that the Victorian genre of literature, as represented by Browning, appears to express more sympathy towards children in the issue of child labor as compared to the Romantics, as portrayed in Blake’s poetry.

Also, based on the strength and dynamics of the words used, it can be observed that Browning’s stanzas are undeniably more sympathetic and compassionate towards children. Her poem also shows more concern and empathy to what children experience and go through everyday which they do not actually deserve. However, although Blake’s poem does not appear to be as much sympathetic and compassionate towards working children, it at least provides a good picture and representation of the kind of life that working children of his time led.

A Child’s Voice as Reflected in Victorian and Romantic Poems. (2017, Jan 26). Retrieved from http://studymoose.com/a-childs-voice-as-reflected-in-victorian-and-romantic-poems-essay 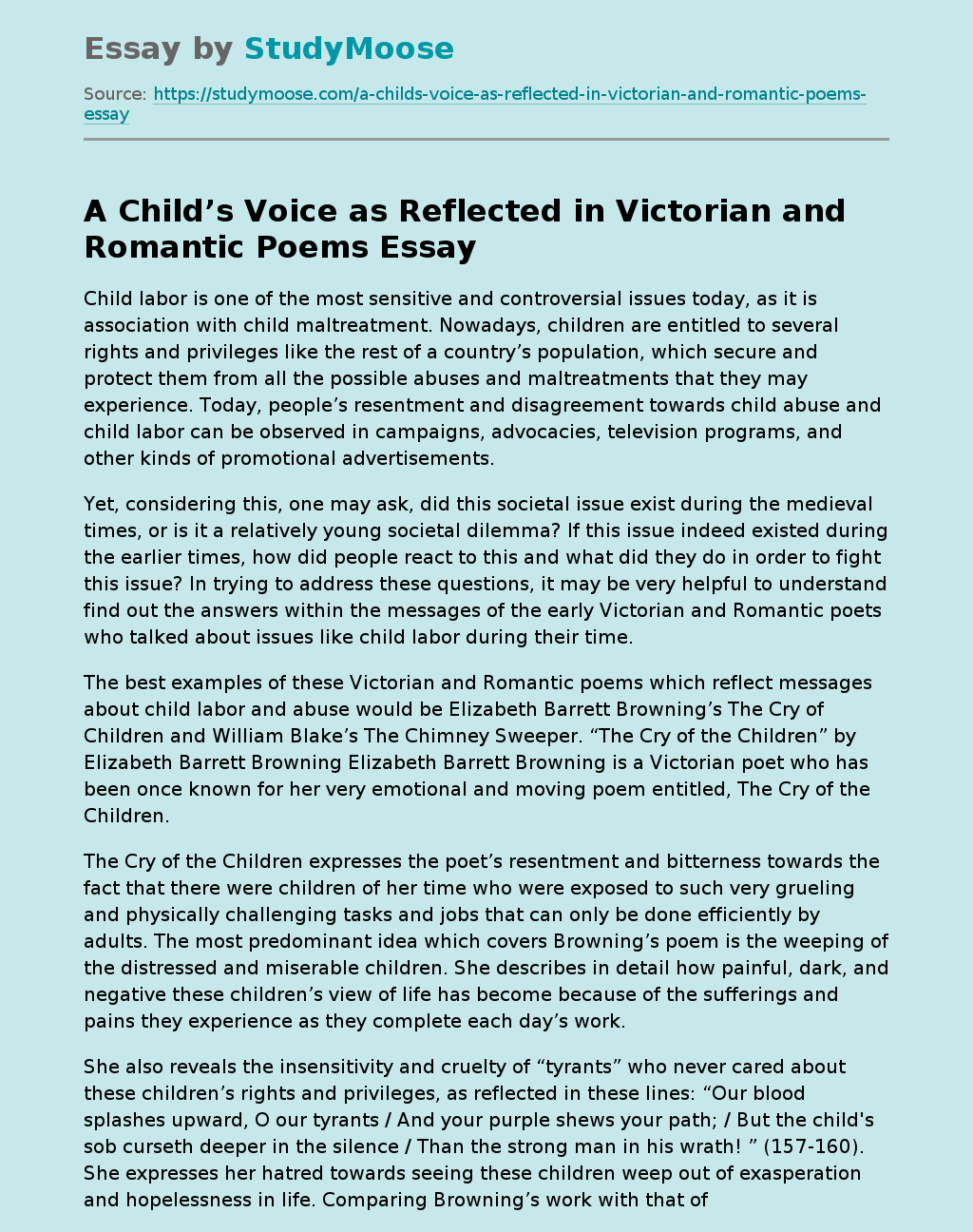