A Character Analysis of Kerima Tuvera’s The Virgin

Through the use of theories based on psychology and personality, the characters in The Virgin will be analysed in this essay to show that there was development. To do this essay, I did extensive research on the types of theories that were floating about on the Internet such as the Psychoanalytic Theory of Freud. I also did in-depth research on the types of characters in literature to help with understanding who the characters were and what they brought to the story.

Don't use plagiarized sources. Get your custom essay on
“ A Character Analysis of Kerima Tuvera’s The Virgin ”
Get custom paper
NEW! smart matching with writer

A few examples would be figuring out who the protagonist or foil were in the story.

Here, I am going to analyse the characters within the story with the main focus being on Miss Mijares and the Carpenter.

When Miss Mijares is introduced, we immediately see that she is the protagonist because the story is centred on her and the conflicts that she is faced with. We see this as the story is wholly in her point of view, although it is in the third person limited omniscient, and never in any of the other character’s point of views.

We see this throughout the entire story but an example of this would be in the second paragraph where it says, ‘Miss Mijares thought how she could easily have said, Please wait for me, or Will you wait for me? But years of working for the placement section had dulled the edges of her instinct for courtesy.

(Polotan)’ Finally, it is omniscient because as we know information about Miss Mijares that the other characters do not. We can see this in paragraph 6 where we find out that whenever she watches movies; ‘her own fingers stole unconsciously to her unbruised lips (Polotan)’. That is a personal experience and so not many, if any, of the characters know about this but we do.

Read more: Essay About the Virgin by Kerima Polotan Tuvera

When reading the story, you find that there is a lot of development from Miss Mijares.

Usually you find that, within the confines of the Placement Office, she is very cold and impatient with the people who she interviews. We can see this in paragraph 3 where it says, ‘When she talked with the jobless across her desk, asking them the damning questions that completed their humiliation…she was filled with an impatience she could not understand (Polotan)’ as well as feeling slightly disgusted by them as she ‘would turn away to touch the delicate edge of the handkerchief she wore on her breast. (Polotan)’ We find that she has a rather Authoritarian Personality, which was proposed by Adorno and many others. This seems to rather fit her as people with this type of personality would be ‘hostile to those who are of inferior status’ (NcLeod), hence her coldness towards the lower class, upholding traditional values, such as her wanting to find love, as well as respect for authority figures, which we can see in Paragraph 46 ‘“Your lives are our business here,” she shouted (Polotan)’.

However, when she comes back from her lunch, she no longer sees him as some guy in the Placement Office. Miss Mijares starts to see small details about him such as his ‘big, strong wrists (Polotan)’ or the fact that she glorifies the bird in his hand to be a ‘dove’. On the flip side, when her subconscious realises this, she goes back to her Authoritarian Personality to put him back in his place by speaking in English. This personality, on the other hand, does not continue and seems to be some sort of defence against projecting what she truly feels as she persuades Ato to give the Carpenter an extra half peso instead of dropping the subject on pay. From Freud’s study on ego defences, there are several defence mechanisms that are available but the one that relates the most to Miss Mijares is Repression.

‘Repression is an unconscious mechanism, employed by the ego, to keep disturbing or threatening thoughts from become conscious’ (McLeod, Defense Mechanisms). It becomes very apparent as the story progresses because she appears to take a liking to the Carpenter and once she finds out the damning news that ‘his son died (Polotan)’; the boundaries come back up again and resume her Authoritarian personality. However, this time, she starts to see the small details that do not make him attractive such as ‘his two front teeth were widely set apart (Polotan)’ in paragraph 42.

After the confrontation about his whereabouts she meets him outside but she is indifferent to him, unlike previously when he thanked her for the extra half peso. He takes the same jeepney as her and gets off at the same time but by the end, after he touches her, her defence falls back down again and she saw the man who was standing in her office asking for a job and presumably goes with him and ‘she turned to him; with ruffles wet and wilted, in the dark she turned to him. (Polotan)’

This all relates back to Freud’s idea about the psyche. At the beginning of the story, we are dealt with the introduction of Miss Mijares. We find out that Miss Mijares is a woman who has never been with a man-physically or emotionally. This is because we see that ‘there had been other things to do-college to finish, a niece to put through school, a mother to care for (Polotan)’. Through this, we can see that it turns back to The Superego. This means that there ‘is control of id’s (which we will come to later) impulses, especially those which society forbids, such as sex and aggression. It also has the function of persuading the ego to turn to moralistic goals rather than simply realistic ones and to strive for perfection’ (McLeod, Id, Ego and Superego).

However, through having this Superego, there is the ‘ideal self’ and this ‘is an imaginary picture of how you ought to be, and represents career aspirations, how to treat other people, and how to behave as a member of society’ (McLeod, Id, Ego and Superego). We see this in many ways such as how she reacts to the poor such as when she would touch the handkerchief after dealing with the papers in paragraph 3. Another good example of this would be how she reacted to the Carpenter lying to her. She saw past her lust for the man and her superego made her feel guilt for being so lustful after a man she knew little about.

This then goes onto The Ego. The Ego ‘is the decision making component of personality’ and ‘considers social realities and norms, etiquette and rules in deciding how to behave’ (McLeod, Id, Ego and Superego). We do not see much of this but an example of this would be in paragraph 11 where a bird paperweight had been put on her desk and she had to remind herself that she was surrounded by people as she laughed and even ‘told herself, who; get a hold, a hold, a hold! (Polotan)’.

However, the one that is the most significant is the id. It is the ‘impulsive part of our psyche which responds directly and immediately to the instincts’ (McLeod, Id, Ego and Superego). We see this a lot in the story, such as in paragraph 6 where we have a taste of what Miss Mijares actually wants and sometimes even fantasises about. For example, ‘in the jeepneys she took to work when a man pressed down beside her and through her dress she felt the curve of his thigh’ or ‘her eyes straying, against her will to the bedroom door (Polotan)’. However, the main one that caught our attention was in the final few paragraphs. After years of denying herself and her id of what she really wanted, she gave in to the primal instincts of wanting a man as she ‘turned to him’ after he brushed against her.

Therefore, we witness Miss Mijares unravel psychologically as she slowly starts to attain what she has wanted for a long time. We see her go from a very prim-proper woman to a woman who desires love and want so much that her walls break down and she no longer holds the image she shows to everyone else. She gives in to her primal instincts.

The Carpenter is a character who is very much opposite to who Miss Mijares is. Physically, we can see there is an immediate difference between the two characters. The Carpenter is described as ‘a tall, big man (Polotan)’ that is in contrast to Miss Mijares who is described as ‘slight, almost bony’. In addition to this, he is everything that Miss Mijares seems to be against in her nature. Miss Mijares, in the story, puts people in their place when she sees fit as well as try and give people what they deserve, just like when she tried to give the Carpenter the extra peso as he was filling a four peso slot, while the Carpenter, although does not exactly lie, lies about his position in his life with family. There is the sense that he manipulated her to get what he wanted in the end, and that was her.

This, therefore, makes the Carpenter a juxtaposition. He is the anti-hero and antagonist. He is the anti-hero because he holds moral values that are against what Miss Mijares is about-she is essentially the honest type of person-while the Carpenter readily lied to try and get what he wanted. He is the antagonist because he is what blocks Miss Mijares from seeing straight; he is her obstacle to get past. Although he is not a villain, he is able to stop Miss Mijares from seeing straight and acting like she usually does. She acts out in a way that is not usual for her as she looked after her mother; she got through college and helped with her niece to put her through school. However, the Carpenter is not married to the mother of his son, a college graduate or saving up money to put his child through school. Hence, he is a juxtaposition.

Polotan, Kerima. The Virgin (From The Likhaan Anthology of Philippine Literature in English). Quezon City: University of the Philippines Press, 2002.

A Character Analysis of Kerima Tuvera’s The Virgin. (2016, Sep 23). Retrieved from https://studymoose.com/a-character-analysis-of-kerima-tuveras-the-virgin-essay 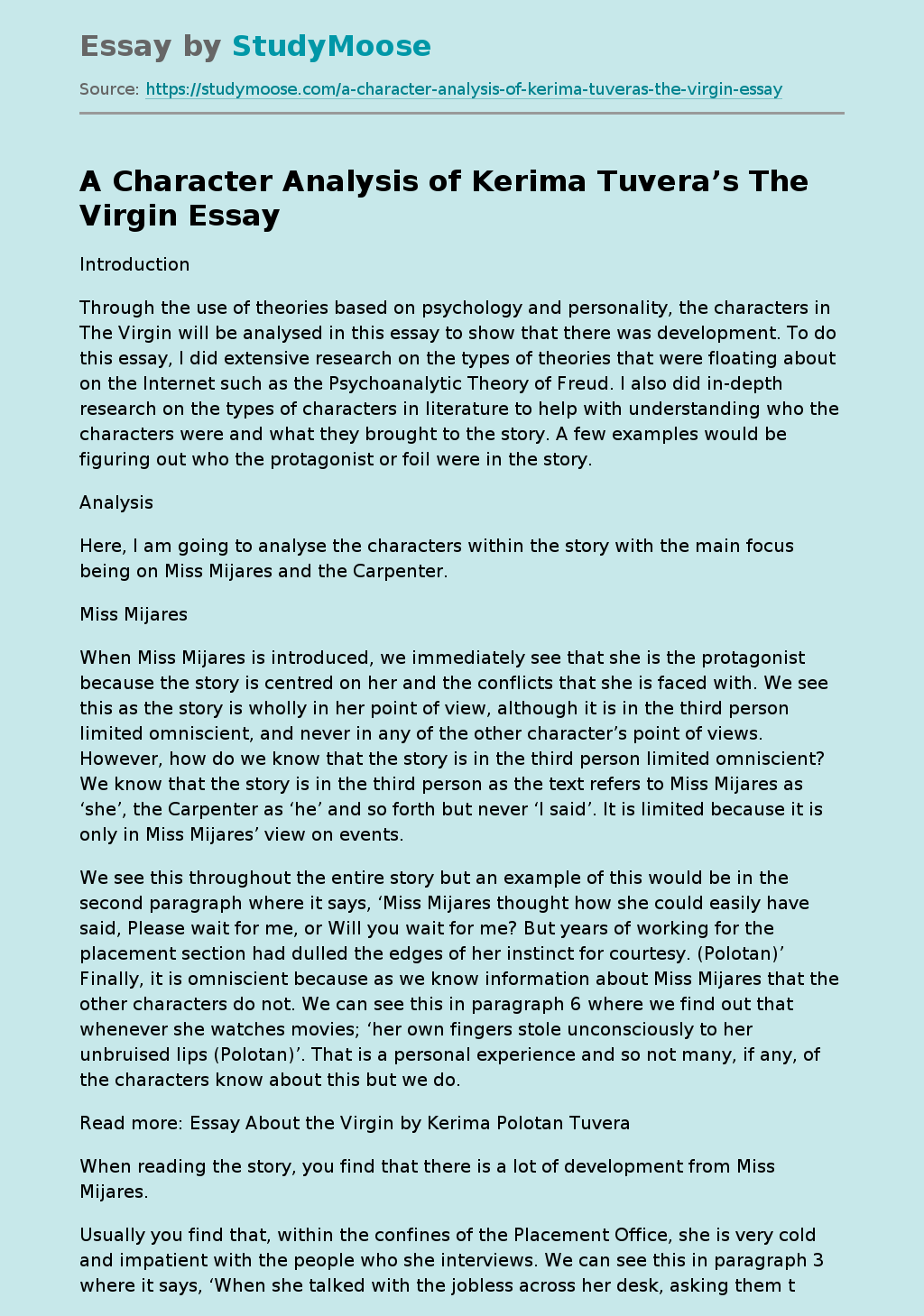