A Bag of Oranges

The story “A Bag of Oranges” by Spiro Athanas tells about a poor family lived in the rotting slum and the boy in this family became a mature person from a childish kid. Because the boy’s father needs to pay his responsibility to his family and the people who he loved, so his rude behavior and act makes his son hate him for a short time. After the boy notice his family’s financial situation, then he realize it’s not easy be an adult to making life run in the society, and you would lose some important things while you are paying responsibility to your family, so he begin understand his father.

Don't use plagiarized sources.
Get Your Custom Essay on A Bag of Oranges Just from $13,9/Page

When the boy know his father hit by a car, all his emotion spew out and make his act like an adult in the end of the story because he take the responsibility from his father. The author wants to tell us the childish boy becomes a mature boy because the boy understands take care of a family need you pay a lot or got misunderstand.

He throws all his childish behavior away and tries to take the responsibility to his family and the people who he loved. Sometimes, it’s not easy to be an adult because you need swallow all tough things with no childish emotion. At the beginning of the story, the boy is a really childish kid because he doesn’t understand anything about life.

When his father goes to buy two boxes of strawberries and it’s just thirty cents for two, his father still bargains with the vendor three times. Finally, he gets two boxes of strawberries for 25 cents. Even though he still think the vendor is not good. As the story say, “The boy watched and listened to this dialogue, intrigued and a little frightened. But the smile on his father’s lips as they walked away reassured him. (p.217)” The boy doesn’t try to understand the conversation’s meaning. He is just confused and gets scare of the dirty words what his father say like many kids will to do that. It shows us that the boy was childish, had no idea about life at first. He can easily forget the conversation because his father’s smile comforted him. In the coffeehouse, his father has some adult conversation with his brother and another guy. Like many child, the boy just sit with his father and listen to them without thinking. As the story point out, “The boy enjoyed the talk and sometimes felt he was allowed to hear all the secrets of the world, and was only mildly frustrated by the mysteries he could not understand. (p.218)”

That means, the boy feel he is an adult when he sitwith his father and listen to their conversation about women and some adult jokes. As it mentions, he can’t understand everything they talked because he doesn’t interested on the topics that they talk.so he is still immaturity at that time because he doesn’t interest on that and has no idea about the meaning of the conversation. But he can understand the conversation like that is only for adult. Let’s move on to the incident of the story, the boy was very childish after the incident happened and his act and thought was really a kid. As the story says, “He felt the shadow and weight of his father behind him, placid and unashamed. Oh how he hated him and his smug, foreign stupidity! Why did he have to be his father (p.220)?” We can know the boy was really childish after the incident happened. Although his father’s behavior was rude or not good, he is so emotional and doesn’t give his father respect. His father grab the orange form a young man who seemed wants to give help. The boy couldn’t judge his father like that way because he doesn’t know these oranges are for their family and they don’t have much money to waste, so it’s important for them and his father must do that. Also he doesn’t even know what the orange use is for. It shows us, the boy feel momentary hated because of his childish. Children usually forget their feelings and thoughts quickly.

The boy was so hated his father after the incident, but when they get home, he is back to his father again. As the story mentions, “It was so easy and natural he could scarcely believe the emotions he experienced moments ago were real. (p.220)” That means, the boy hate his father before they get home and it was just a childish emotion of him. We can see that when they get home and the boy jump to his father and put his arm around his father’s neck and wrapping his legs around his body. Sometimes, children hate their parents in a moment and show all the emotions on their face to express their feeling, even though these acts and emotions come quickly, but leave quickly. All these acts show and prove he is childish. All these things happen on the boy, they are waiting for the right moment to wake up the boy who in a childish dream. A kid won’t always be a kid, someday they will grow up. As the story point out, “He sipped. It was bitter, the price of being a man. (p.222)” That means, the boy remembered all the things happened on him and his father. He doesn’t understand before, but he does understand now. He feet his father responsibility for his family, and he realize it’s hard to be an adult to figure out everything forlife.

He knows if he wants to be an adult, he must pay many things for that just like his father. That’s why he drink black coffee because he want to taste the hardships of being an adult from the black coffee and he want to feel his father’s position from the black coffee. It shows us, the boy is starting to understand adulthood. The biggest point of the story is the boy acts like an adult and take the responsibility of their family from his father, he chases to the young man who picked their orange. As the story say, “Without breaking stride, the boy leaped onto his back, his small fists flailing wildly. (“That’s my orange!”) He screamed. (“Give me my orange!”) (p.225)” That means, the boy understand how to be an adult and he wants to take the responsibility from his father because he wants to do something for his family. At that time, all his emotions spew out but not crying. On the one hand, he feels so sorry and guilty of his father so he acted like an adult to make up for his mistakes. On the other hand, he figure out how to being an adult so he acts like an adult to face the problem by himself and deal with it like a man. It shows us, the boy is act as an adult and changed his childish act. In conclusion, we can tell by this story that being an adult it’s not easy, you need pay the price for being an adult. Sometimes you will lose yourself and got misunderstand, so all you can do is swallow these tough things and hold you ground for your family and the people who you loved. People who are being an adult or ready to be an adult, you should read this story. This story can teach you find yourself and help you realize what the most important thing is for you and how to protect the thing. Sometimes, you have to do what you don’t like to do and you must accept it because live in the adult’s world you have to pay the price for you and something or someone important for you. 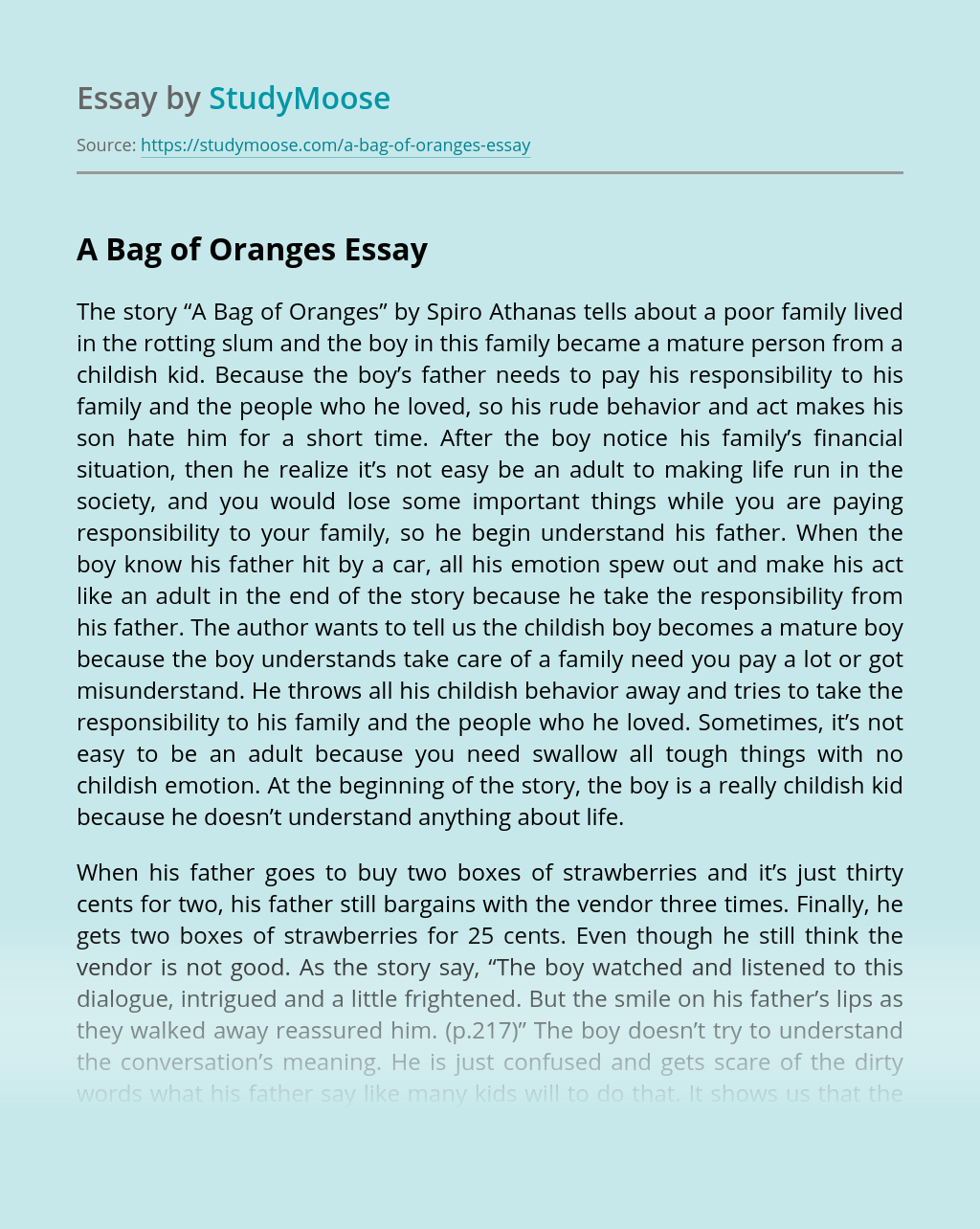 I. Introduction/Executive Summary and Product Description Yuban coffee is a brand of coffee you can find in your local grocery store that you probably did not know existed. It was founded by John Arbuckle, a famous coffee roaster, who has invented the original Yuban coffee in 1986. Yuban coffee only uses the best Arabica beans....

Kristen Kirkpatrick said that a study in 2012 showed that three or more cups of coffee a day lowers the risk of death regardless of whether participants drank caffeinated or decaffeinated coffee. 2. Makes your reproductive system happy d. Men would you like a drink that could lower your chances for prostate cancer? And ladies...

1. Executive Summary 1.1 Synopsis of the Situation The history of Angostura aromatic bitters approaches the year of 1822, when a cholera epidemic whipped the population of Angostura in Venezuela, when the young doctor Johann Gottlieb Benjamin Siegert created a somewhat bitter medicine, quite unusual taste, but of proven volatilities effectively relieve the stomach of...

I – Xpresso Lube’s Service Package Supporting Facility In Xpresso Lube, Charlie provided lifts in the workshop so that customers can have a view of their cars to take a look at the problems the staff had mentioned. This gains customer loyalty, by ensuring that the customers do not get ripped off, as to encourage...

Introduction Starbucks Coffee Company was formed in 1971 and now has over 23,000 stores operating in 64 countries. (Starbucks, 2014) The decision of whether to manufacture a product in-house (“make”) or purchase it from outside suppliers/manufacturers (“buy”) can have a significant impact on the operations of a firm and is arguably the most fundamental component...