1492: Conquest of Paradise and Indians

1492: Conquest of Paradise is a movie directed by Ridley Scott and it was released in 1992. The main character Christopher Columbus was played by Gerard Depardieu and the movie was about his attempt to find a way to go to India by sailing west. The movie begins with Columbus teaching his son how the earth is round. Then Columbus thinks about the ways to get to India and that the best way was to go west. The people in Salamanca agreed to seeing his proposal all they do is laugh at it and challenge his idea.

Don't use plagiarized sources. Get your custom essay on
“ 1492: Conquest of Paradise and Indians ”
Get custom paper
NEW! smart matching with writer

Even though the council rejected the idea he goes to Queen Elizabeth I which is played by Sigourney Weaver, and she gave him a chance. This other man wanted to help him but wanted money in return but Columbus did not accept and was to become a monk but the queen did not allow it and the queen supported the trip. They use this pendulum this to help them navigate and to find what degree latitude or longitude they are at.

It has been weeks and the men think that they have gone off track and they do not trust in Columbus. They finally reach land and they go and explore until they find the indians. At first the indians are scary and Columbus’s plan does not involve force. They did not really find any gold except the artifacts the Indian’ gave them. The spanish were treated as gods.

About 39 men stayed behind to build a fort while they go back to Spain cause the captain called Mendez played by Kevin Dunn, had a fever that would not go away. When they get to Spain they get applauded and and now he wants to go back with 7 ships and 1500 men. So he goes back to the West Indies and all his men are dead and the village they were at was burned down to the core.

He wants peace with the Indians and so the Indians help bring in this bell and they help construct this fort and village. Then the Indians were put to find gold and they had to go turn it in everyday and one did not find anything and this man comes and chops his hand off and that starts a war with the natives. So the natives attach and burn down what they built but in reality an actual spaniard burnt it down. Two spaniards make allies with the Indian, one commits suicide then they start cooperating and this storm comes and everything is destroyed. Then at the end his son Fernando writes of his dad’s voyage.

The movie is in the main character’s perspective which is Christopher Columbus. The message of the story is that if there is a will there is a way. Columbus did not give up even though the university did not support him. The movie relates really well to the themes of politics, social, economical, and cultural. Social is about two types of people interacting, in this case the Indians and Spaniards. You see the culture of the Indians. From what i know about Christopher Columbus’s story I did not find any historical inaccuracies, except how he did 4 trips and they only show him doing 2 trips.

This movie has a great value in advancing my knowledge of history. There are barely any historical inaccuracies (I believe), it stuck to the real history. I do not believe that there are not any drawbacks, this movie is very accurate and it is a valuable source. 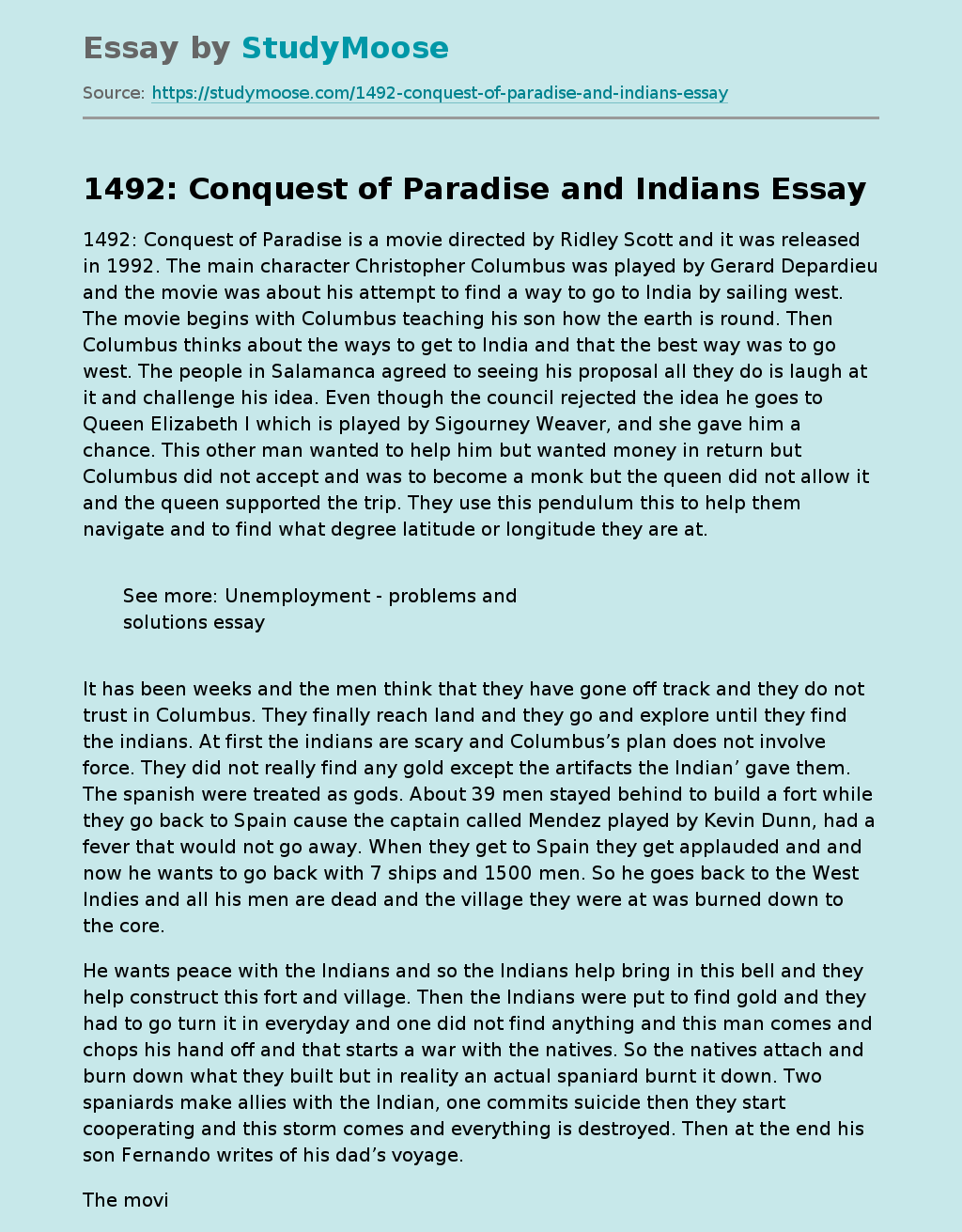