Times are truly changing and this change has been exceptionally portrayed in Michael Gow’s theatrical drama “Away”. (Michael Gow, 1986, currency press PTY LTD) Away is a story of many different families and characters, which is one of the key reasons that will allow it to reach a broader audience for your show. Through out the play many diverse concepts are explored and they include the idea that new insight and perspective can cause change. Within the text Gow uses the physical notion of going away to represent a symbolic journey that the characters will undergo.

Don't use plagiarized sources. Get your custom essay on
“ Zimbabwean children ”
Get custom paper
NEW! smart matching with writer

This metaphorical journey is most evident in Gwen. Gwen is an Australian house wife who lived through the great depression; she is commonly seen as very materialistic, unsympathetic and overbearing which is often blamed on her overriding aim to keep her family out of hardship. Gow shows examples of these qualities in act one scene two were there is a use of short sentences and rhetorical questions.

This has the effect of increasing tension and provides the audience with insight into the pre change nature of Gwen. As the text continues Gow places Gwen in many situations of conflict, the most substantial of these includes argument with her daughter Meg. This confrontation is extremely ironic as Gwen is ignorant of her qualities however easily identifies them in others. An example includes “Your developing a nasty streak, your becoming a snide, nasty snide girl” from Act 2 scene 3.

This also shows the audience how reflection is often all that is needed for change, however in the case of Gwen a lack of, may cause no change. This is one of the many techniques that makes “away” a perfect selection for your program as it allows the audience to clearly contrast the qualities of the characters. As the play progresses Gwen is forced to face much adversity which comes due to the fact that up until this point Gwen has lead such a structured lifestyle and doesn’t know how to cope when things are out of her control.

However when a horrific storm occurs she is stripped of her material positions, which shows that once the superficial things are gone an atmosphere for change can be created. This is seen through the use of truncated sentences during the storm “The stove, my purse, the boat will be washed away” which increases the tension and highlights the importance placed on material items. As the story concludes, the families meet at a beach. This beach becomes symbolic of the rejuvenation that will occur there. At the beach Gwen faces her catalyst in learning about tom’s illness.

This allows her to reflect on her lifestyle and learn to appreciate the life that she has. This change is seen in the stage directions “the women come back crying and supporting each other” which shows the first time Gwen hasn’t been entirely in charge. This post change nature is also seen in the play at the beach, were Gwen leads the applause. This passion is juxtaposed to her reaction after the first play at the school and is a clear indicator of the post change Gwen. This makes clear that change can be brought upon by external factors and the reflection of one’s self.

All these factors and techniques brought together with the fact that this text remains relevant and interesting makes “away” an excellent option for SBS and in particular “times are changing”. The Island “The island” (Armen Greder, 2005, Patmos verla GmbH) is an excellent picture book by Armin Greder which tells the story of a man who is a foreigner to an island populated with a xenophobic group. It makes an ideal text for your show as it addresses many key issues like belonging and the change that stems from it.

This books message is clear and it is the fact that the lack of change that can come from imposing superficial barriers. This is very relevant to today’s society making it a great option to consider. The book begins with an image of the naked man and the islanders. Within images on the first and second page there is a clear disproportion of the amount of framing that taken up by the foreigner and the natives. This use of framing exemplifies the power imbalance and it highlights the ability for the islanders to make constructive change. However it also illustrates the discomfort that may come with change.

As the book progresses the natives are convinced to take the man in, however there true feelings prevail and the man is sent to goat pen where he must fend for himself. This isolation is seen in the characterisation of the islander’s postures, one of the men has his back completely turned while others are in defensive stances. This depicts the complete rejection of change that is felt. As the book comes to a close, fear of the man begins to increase once again and this is shown in the hyperbole of the islanders when saying “we can’t feed everybody, we would all starve”.

This fear then becomes the factor that prevents change and the catalyst. The Fear also leads to the islanders exiling the man and building a wall around there island. This wall would be symbolic of the islander’s rejection to change. Throughout the book the same concepts are seen and it is the fact that superficial barriers can be a blockage to change. Unicef Website UNICEF (www. unicef. com. au, UNICEF Organisation) is a development organisation which is aimed to providing a better standard of living for many children around the world and its website is the medium in which it conveys its message.

UNICEF explores change in a totally unique and interesting way making it ideal for a program like “times are changing”. I personally believe that this form of text will appeal to your audiences as it is modern and engaging. This Websites attempts to express its concept that many small changes can amount to substantial change. The immediate attention that is gained when opening the UNICEF webpage is the salient image of two Zimbabwean children. This use of salient imagery instantly grabs the viewer’s attention and illustrates the conditions and pre-change circumstances of the children.

This idea is then reinforced with the demand gaze of the children, which shows the need for things to be altered. This Gaze along with the salient image highlights the idea that change can be a tough process, however it is very necessary. This is a concept that would be applicable to many of the audience of a show like “times are changing” which makes this website a perfect text to explore. Within looking at the text the catalyst of this need for change becomes obvious, and this is the inequality that is seen throughout the world.

This inequality is the reason for organisations like UNICEF to take action. This need for action is portrayed in the text by using Imperative language. Within the text word such as “donate now” and “get involved” encourage audiences to take action and embrace the concepts of the website. Overall, and throughout the entire text the major concept that is evident is that change can be a difficult and extensive process however it is extremely crucial. Covering Statement

Away, The Island and the UNICEF website all convey many aspects of change. These aspects are similar in some sense, however are also very different. Within “away” the main ideas of change were quite similar and correlated to the other texts as they similarly involved superficial barriers that prevented or delayed change from happening. In the case of “away” these superficial barriers were the material positions that Gwen held close to her, not allowing her to appreciate the family and the life that she had.

Whereas in the” island” the superficial barrier was the ethnicity and some external differences between the people, these differences prevented change from occurring which resulted in stagnation. These barriers highlight a clear comparison between Gwen and the xenophobic islanders In the case of the UNICEF website the concept of change was slightly different to the other texts and this concept was the idea that change can be a difficult and extensive process however it is extremely crucial to have.

Within the Island this idea was evident as the islanders were not willing to undergo this process and therefore rejected change. Despite this concept relating to the island and UNICEF it is not as applicable to “away” as the means for change are very different. Within Away, the key trigger for the change is the new insight and the reflection of one’s self, however this is a notion that is less relevant to the other text as there factors for change were more external.

All in all, the mixture of these concepts provided a rich and engaging source of entertainment and knowledge for the viewers of times are changing. When making a comparison between there concept of change and the methods in which they were shown it is clear that they are interrelated . These concepts convey messages that are pertinent to a wide audience and they gave a unique way of looking at many of these pressing issues making them idealistic for a broadcasting station like SBS and in particular “times are changing”. 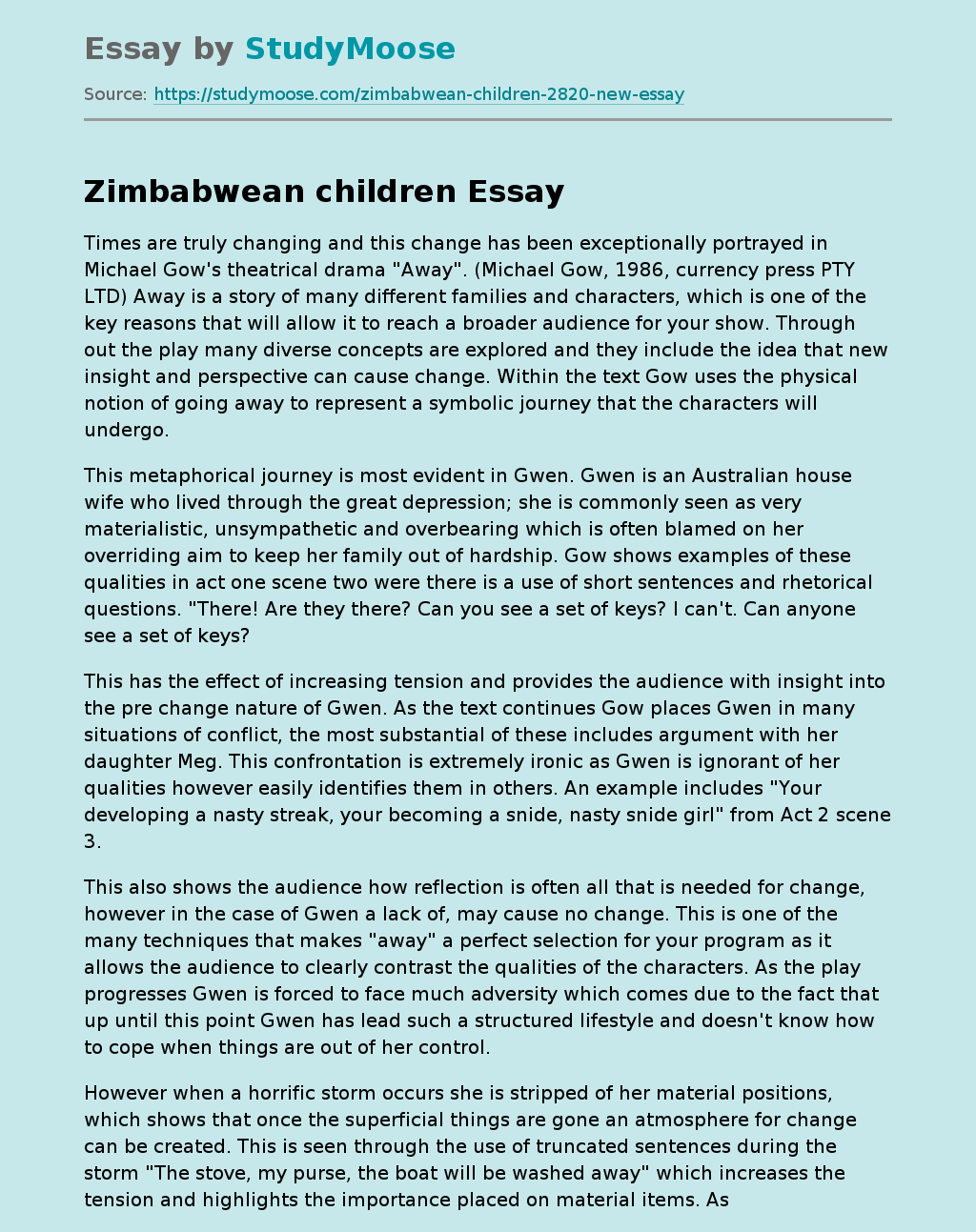