Wright Brothers- Invention of Airplane and Its Impacts

America 1903
Firstly, things were going well for the economy in the Wright Brothers time period – The American Progressive Era. There were more technological developments and a social growth too- the U.S.A was becoming more involved with other countries and became a major world power. A war against Spanish rule was coming to its end, but America was entering World War 1. Luckily, this was just the right time for the Wright Brothers to be alive, because their invention of manned flight was widely used by many countries in the war and was very important in helping their side of the war.

Don't use plagiarized sources. Get your custom essay on
“ Wright Brothers- Invention of Airplane and Its Impacts ”
Get custom paper
NEW! smart matching with writer

Aerial Warfare
World War I was the first war in which aircraft were deployed on a large scale, ten years after the Wright Brothers invented controlled manned flight. Initially, they were used mostly for reconnaissance (surveying and spying on other countries from the air). Pilots and engineers learned from experience, leading to the development of many specialized types of fighting planes, including fighters, bombers, and ground-attack airplanes.

The airplanes were so important because the countries with them occupied the element of surprise and a new way of fighting (like dropping air bombs) which was hard to defeat. Actually, airplanes have been so useful they are still used in wars today. They have shaped modern warfare, because now armies have to prepare their soldiers differently for war, so they are ready to defend from or use air strikes. Thanks to the Wright Brothers, there is a whole new side to warfare.

Airplanes for Travel
Today, airplanes are used to transport people quickly around for holidays. In the Wright Brothers time, they were not used for this, but they have had a massive impact on how we live today. After a while airplanes were used to fly around the world in a short space of time. It made it easier for more people to experience more places, and the western culture spread quickly around the globe. Because of the Wright Brothers’ invention, the world has been ‘Europeanised’ very quickly. Now many eastern cultures have been influenced or changed by tourists flying there by plane. This is why the
airplane has heavily impacted today’s society.

Wright Brothers- Invention of Airplane and Its Impacts. (2016, Apr 05). Retrieved from http://studymoose.com/wright-brothers-invention-of-airplane-and-its-impacts-essay 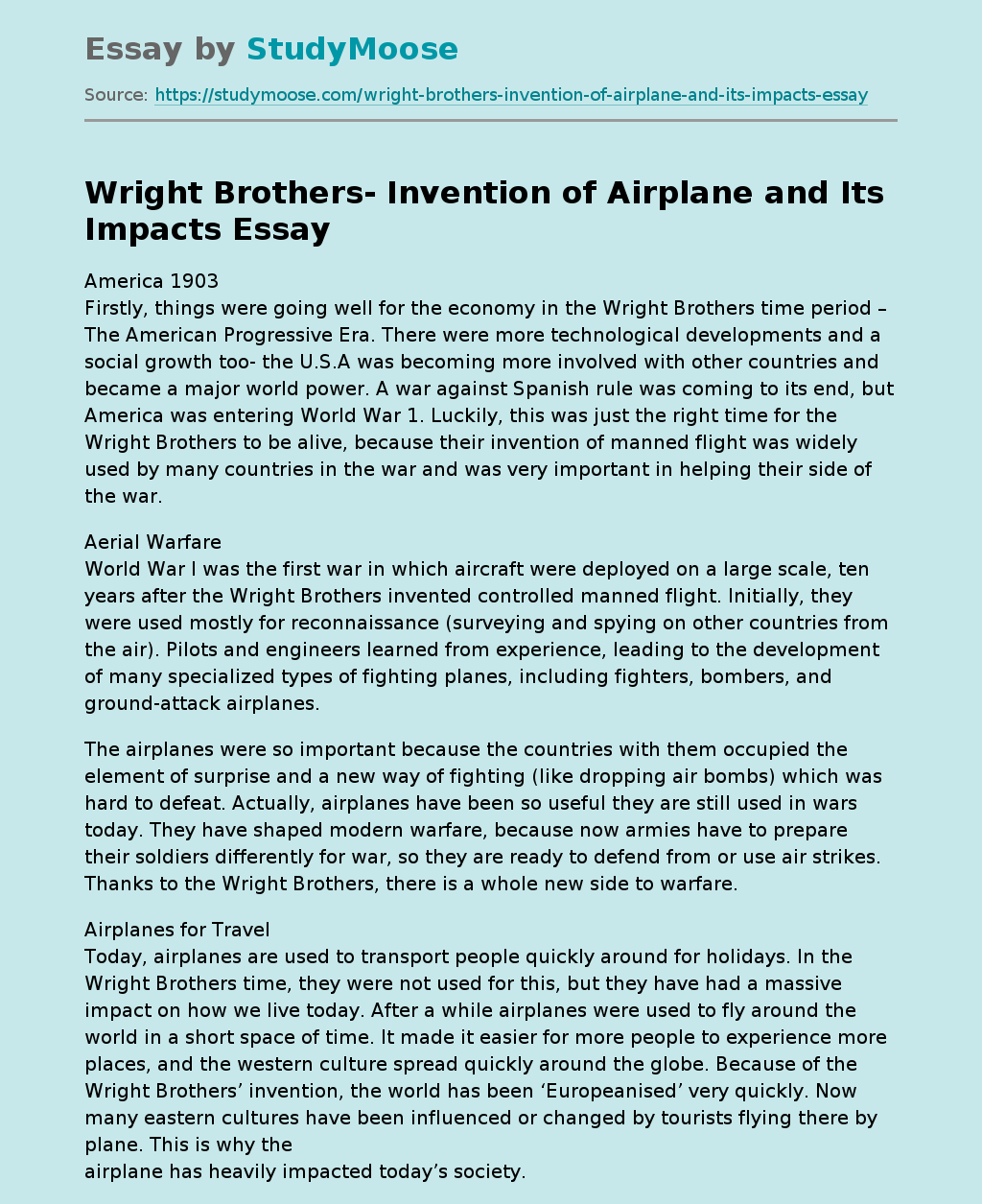