Wrath in Novel "The Grapes of Wrath" by John Steinbeck

The title of this novel is of one of many questions. Do we as the reader know what they are? Could it possibly be anger, hatred, regret, resignation, or bitterness? Or perhaps they are, however all these combined into one. In John Steinbeck’s novel The Grapes of Wrath he justifies his reasons for titling his novel areas follows. Steinbeck bolsters his claims by developing the storyline so that it builds up the justification for his novel’s title. Steinbeck’s purpose of naming his novel The Grapes of Wrath, is to foreshadow the events that will come from the wrath of each character section, the sections being the workers.

Don't use plagiarized sources. Get your custom essay on
“ Wrath in Novel “The Grapes of Wrath” by John Steinbeck ”
Get custom paper
NEW! smart matching with writer

And without work being done, no revenue came into the farmers. This meant farmers could not pay back the debt owed to the bank. And this is the origin of the wrath, the wrath that will dominate and assume control of not only the west, but the United States as a whole.

Proficient in: Grapes of Wrath The Grapes Of Wrath

Because the farmers do not have the funds to pay back the debts they owe, the bank seizes all property. Steinbeck shows this in his novel by writing. “The little farmers watched debt creep up on them like the tide”(Steinbeck 348). In this he explains how the bank is preying on the helpless farmers, who are swallowed in debt. This causes the farmers to have little to no money to continue working on their farms. Even the farms that have not been repossessed by the bank are struggling to stay open.

They have very little money and cannot sell their crops.

Because the farmers have little money already, they cannot spend money on wages for farm hands. This created less jobs for the migrants. And since the migrants do not have jobs, they cannot pay for very much food. This creates very little demand for all products the farmers have. This means the farmers make no profit on their products, and therefore cannot hire hands to harvest the crops. Due to the farmers suffering Steinbeck writes, “The work of the roots of the vines, of the trees, must be destroyed to keep up the prices, and this is the saddest, bitterest thing of all” (Steinbeck 348). This excerpt explains how the farmers must keep up the price of food, by destroying the crops. They burn and throw the produce into rivers, all while starving migrants watch and lust after the waste of food. And this, the wrath of the farmers, lead to the wrath of the migrants. The farmers would rather let the food be destroyed than give it to the starving people. And this is extremely disheartening, people not treating other people like people. This would cause the migrants wrath to grow, and grow large and seething.

In contrast to all the food being wasted, so farmers can get more money, the migrants have very little food and little or no money. And the farmers destroying perfectly good food bank, the farmers (from California), and the migrants (“Okies”). The tone Steinbeck writes is that of an earnest tone, to help aide in conveying the meaning of the foreshadowed events. The events being the destruction of crops, causing many people to be hungry, both farmers and migrants, Steinbeck reveals his justification of the title by using diction, figurative language, and syntax.

All wrath has an origin to the story, and has a precise meaning behind it. And in this particular novel, The Grapes of Wrath, it all begins with the bank. Starting with how the workers could not get jobs; this was because the farmers could not pay wages to their causes the migrants to grow distraught. The food wasted could have sustained many migrant children, and woman. The immigrants think of this as they witness the abomination happen. In his novel, Steinbeck writes, “In the souls of the people The Grapes of Wrath are filling and growing heavy, heavy for the vintage” (Steinbeck 349). He writes this, not only to explain how the migrants are feeling, but to make the reader fully understand why the novel is titled The Grapes Of Wrath.

Steinbeck uses diction, details, syntax, figurative language, and imagery to enhance the novel, to help the reader understand the title. An example of diction us uses is “Behind the fruitfulness are men of understanding and knowledge and skill, men who experiment with seeds..” (Steinbeck 247). In this, Steinbeck explains how the farmers had labored so they could sell their crops, but could not sell them because not many migrants had money, even for food. An example of the details that Steinbeck uses is “…and that old grape that grew among the trees and fed the birds it’s tiny fruit has mothered a thousand varieties, red and black, green and pale pink, purple and yellow; and each variety with its own flavor”(Steinbeck 347). In this, Steinbeck uses details to explain the types of grapes growing. And the type of grapes can be compared to the growing wrath of the bank, farmers, and migrants. An example syntax used is, “We can’t pay wages, no matter what washes” (Steinbeck 347). In this example Steinbeck portrays that the farmers cannot pay the wages of the workers, which in turn is a big problem due to the fact that they can’t fix that problem. Ending off with the use of figurative language, Steinbeck wrote “The decay spreads over the State…” (Steinbeck 248). For this particular example Steinbeck describes how the fruit is still on the trees and has not been picked yet. These are just some of the few examples that show the true meaning behind the title. The bank and its rapacity, the farmers and their rapacity, as well as the migrants and their wants, are the beginning, the middle, and end of the wrath of the west. And with this, the wrath filled west, and the aftermath of it all, are all the reasons for the title. That being, The Grapes of Wrath, the wrath being the three individual parties, the bank, the farmer, and the migrants. The wrath of all things became one, transforming the west into a terrible place to be. And this is would accurately show how the west was viewed during the late 1920s through the 1930s.

Wrath in Novel "The Grapes of Wrath" by John Steinbeck. (2021, Mar 05). Retrieved from http://studymoose.com/wrath-in-novel-the-grapes-of-wrath-by-john-steinbeck-essay 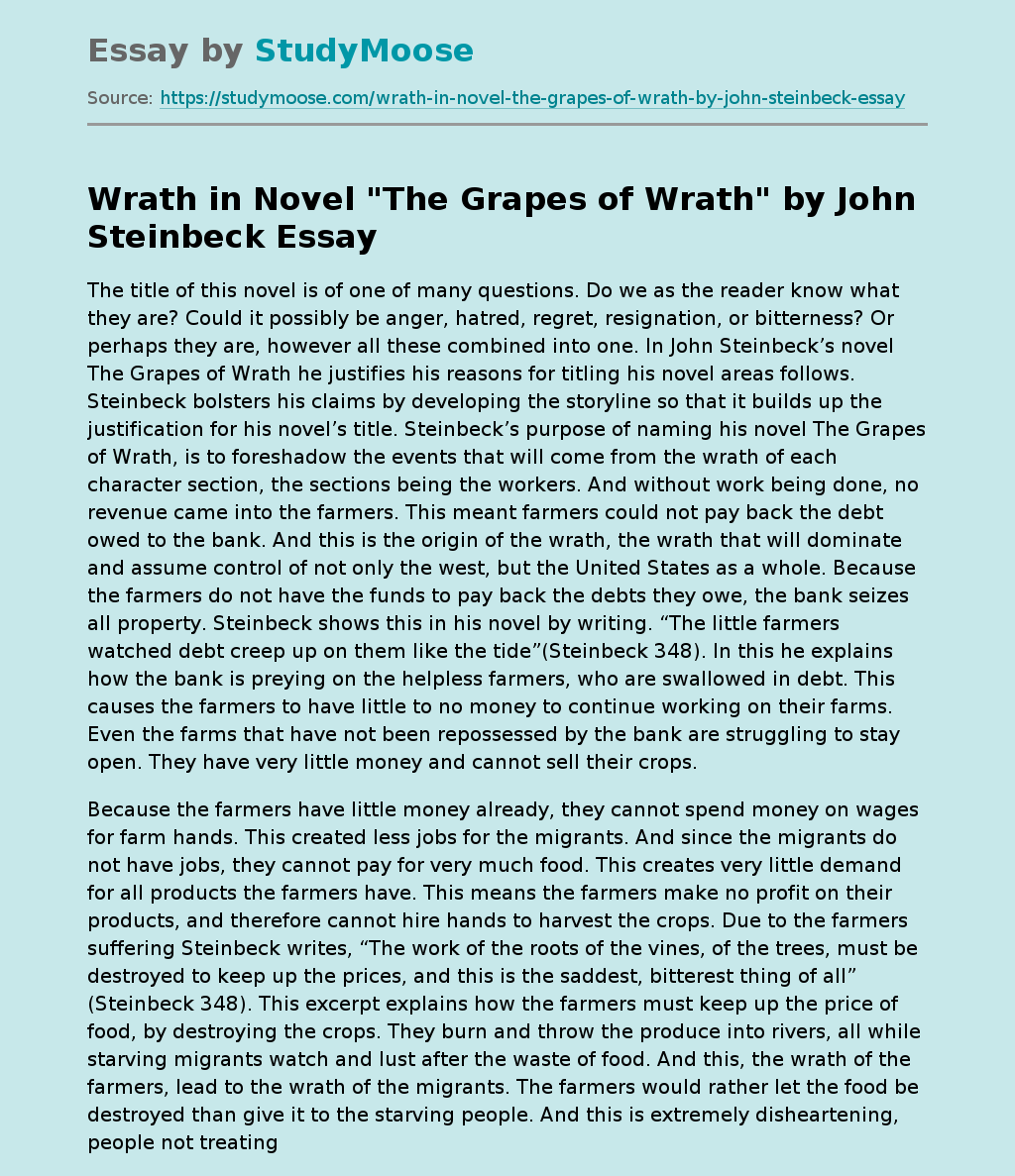