The Grapes of Wrath is a publication written by John Steinbeck. This book came out near the end of the Great Depression. This is a story about the Joads family. The Joads are a family who worked and lived on a farm but now have to leave their home because they are being forced out. Now the family trying to find work in California. The way Steinbeck chooses to write this story really make you think of all sides of the story and paints the bigger picture for you.

Don't use plagiarized sources. Get your custom essay on
“ The Great Depression in Novel “The Grapes of Wrath” by John Steinbeck ”
Get custom paper
NEW! smart matching with writer

In this story we see other families like the Joads and they are know as migrant workers. In this story Steinbeck also shows us what these family had to go through to get where they wanted to be. He did this so that the audience reading it would see and feel for the families and their trials. In chapter 11 of “The Grapes of Wrath” we see the negative effects of corporation-controlled farmland through somber diction and haunting parallelism.

Proficient in: Grapes of Wrath The Grapes Of Wrath

In chapter 11 in this book, Steinbeck uses diction. He uses carefully to chose his words to create a dull, somber feeling in this chapter while also using diction to contrast what he is saying. He often compares his life before he had left his land and the farm to what now has machinery all over that very land. In the begin of this chapter we see him use words like ‘vacant,’ corpse,’ dead’ to bring a negative tone to this part of the writing.

During this section he also uses the terms ‘corrugated,’ disks,’ chemistry,’ ‘analysis,” to relate to the machines. However later in the chapter we see all of this change and his diction changes to a different focus. Now Steinbeck shares how an uncontrolled land will end up with a vacant home. He wants to show the audience why it is important and convince them that it is important to have farmers on the land. Without the famers the house has has been taken over by animals, the house is deteriorating and there is a big hole in the roof. He writes ‘[throwing] a glaring spot on the floor’ (117) and ‘ragged curtains [fluttering] in the broken windows’ (117), these are examples of the effects of no one being there to take care of the house. He wants you to come to the conclusion that the land really is better with the farmers living on it and taking care of it.

In this writing Steinbeck also uses parallel syntax. This is more commonly know as parallelism, this is a type of writing style that repeats. He uses this style all through chapter 11 and we see him show us the negative effects of the corporate farming industry. Throughout this chapter he repeats the words vacant and house. In this chapter he writes ‘houses were left vacant on the land,’ ‘the houses were vacant,” and ‘a vacant house quickly falls apart.” This is in the beginning, middle and end, he does this to make the audience focus on those words so that they become attached to those words. His word choice and placing of these words shows the audience that without the farmers on the land, the land faces new problems. He shows the audience that during this time of the Great Depression farmers when through a rough time period.

In summary, Steinbeck is an interesting writer who brings diction to his audience to make them feel a certain way about whatever it is that he has to say. The way he writes in chapter 11 of The Grapes of Wrath you see his writing style come through and the different ways and a change in the way he writes in this very chapter. You see in his writing what the farmers had to go through during the Great Depression. Steinbeck want the audience to see and to know that what these people went through no one should have to go through.

The Great Depression in Novel "The Grapes of Wrath" by John Steinbeck. (2021, Mar 05). Retrieved from https://studymoose.com/the-great-depression-in-novel-the-grapes-of-wrath-by-john-steinbeck-essay 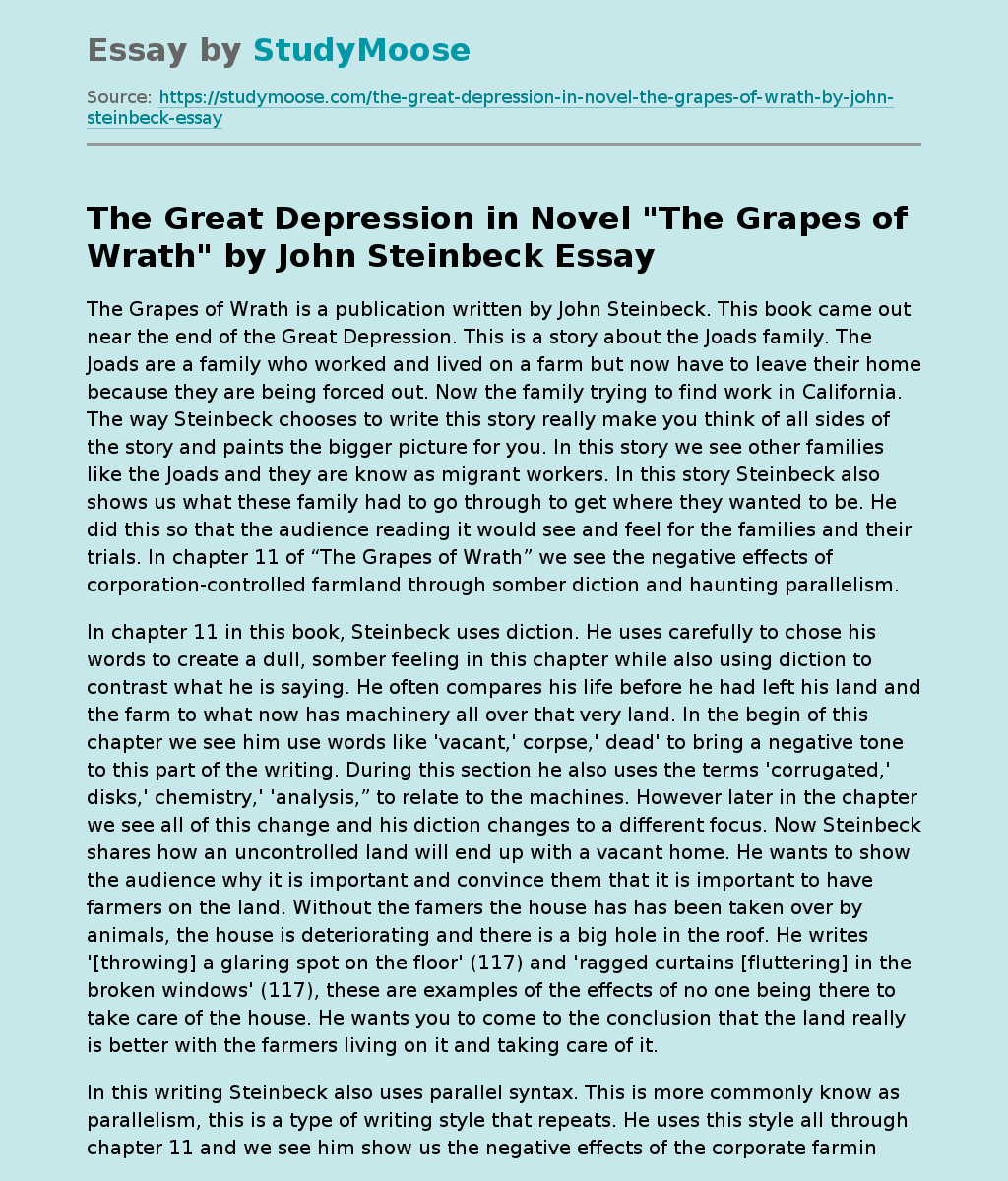