In June 2012 I had the pleasure of watching The Woman In Black in the Fortune Theatre. A spine-chilling adaptation of the 1983 novel by Susan Hill. The story explores a tale of a ‘woman in black’ who is said to haunt the living, when a young solicitor enters a town where the villagers are reluctant to speak anything of this ghostly character he ultimately discovers why. The play was first performed in 1987 in the Saint Joseph Theatre in Scarborough as a ‘Christmas play’ only to attract profits however it attracted more attention than was expected.

Don't use plagiarized sources. Get your custom essay on
“ Woman in Black theatre review ”
Get custom paper
NEW! smart matching with writer

Critics raved about the play and it went onto become a success, eventually upgrading to its present location at the Fortune Theatre in Drury Lane.

The most remarkable thing about this play is the minimalism of it; there are just two actors throughout the whole of the play and a very minimalistic set, just a trunk, and a chair which the actors themselves have to maneuver in order to create different settings.

The audience are initially introduced to the main characters; Arthur Kipps, assisted by a young actor to help him communicate the terrifying events that he faced when on a job in the small town of Crythin Gifford. This play uses the technique of a play within a play to relive Arthur Kipps’ memories. The young actor plays young Arthur Kipps whereas the old Arthur Kipps plays every other character he was faced with. The older actor was tremendous in carrying out his role and would have had to been; playing so many characters and displaying their dialect, body language etc perfectly was outstanding.

What really stood out for me was the exceptional use of such simple effects. In each scene the simplistic setting would not be able to portray a realistic one so a simple use of layering and only lighting what you want the audience to see, with the added accompaniment of sound effects would give the intended audience reaction the director (Robin Herford) wants. Sound is one of the fundamental elements of this play. To create a sense of location such as a train station there are recorded voice-overs. However when portraying the scary and shocking moments of the play, unexpected, ear piercing volumes of screams retrieved the audiences most petrified responses. 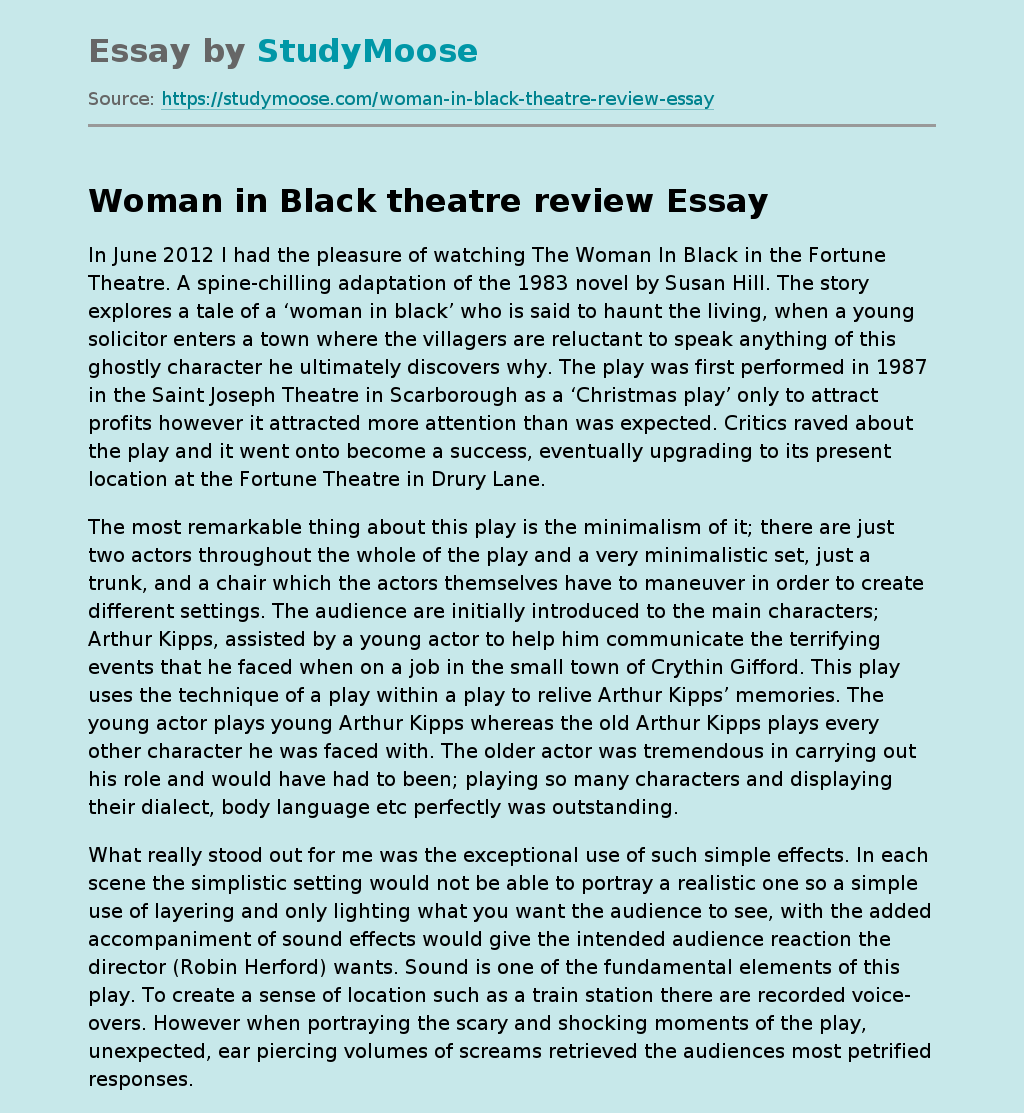