Witchcraft In The Scarlet Letter

Throughout The Scarlet Letter, Nathaniel Hawthorne continually uses witchcraft and the devil as a theme. Hester Prynne, the main character, emerges from a prison in the first few pages of the book. So from the very beginning, it is known that she has committed a great sin of some kind. Many other characters other than Hester also have a connection with the dark side. It is this association with the devil that eventually brings about the demise of one of the major characters.

Don't use plagiarized sources. Get your custom essay on
“ Witchcraft In The Scarlet Letter ”
Get custom paper
NEW! smart matching with writer

Although most of the characters are trying to repent during this story, there is still a link between them and the devil throughout the story.

Hester Prynne was guilty of adultery. In the Puritan colony of Boston, adultery was punishable by a brief prison sentence, time standing on a scaffold in front of all the townspeople, and finally the requirement of bearing a scarlet colored A on your clothing. This letter would act as a constant reminder of the offense committed against God.

Hester was generally a good person who believed in and feared God, ” Thy Heavenly Father sent thee!” (Hawthorne, 99) “She was self-ordained a Sister of Mercy”¦” (156). However, she gave into temptation, and in this devout culture, an act such as this was viewed as a pact with the devil. There is evidence that Hester freely would have turned to the devil if it weren’t for Pearl, “Had they taken her from me, I would willingly have gone with thee into the forest, and signed my name in the Black Man’s book too, and that with mine own blood” (116).

This shows how Pearl helped save her from the devil, even at a young age.

The devil is seen in Pearl more than any other character. She is after all, the product of infidelity. From a very young age, it was obvious that she was not an ordinary child, “”¦this freakish, elvish cast came into the child’s eyes”¦It was a face, fiendlike, full of smiling malice”¦it was as if an evil spirit possessed the child”¦” (98). When asked where she came from, she replied that her mother had picked her from the rose bush by the prison, despite knowing the correct answer. Instead of communicating with other children, Pearl chose to scream shrilly and throw rocks at them. At times she acted as though she were truly possessed, “She accompanied this wild outbreak with piercing shrieks, which the woods reverberated on all sides”¦” (198). When Pearl was in the woods with Hester, she was fascinated by the topic of the “Black Man”. She was constantly asking questions about him, and whether her mother knew him. The very name Pearl, is symbolic since pearls are beautiful on the outside, but contain sand on the inside.

Mr. Dimmesdale was both a young minister and Pearl’s true father. As a sign of his wrongdoing, a scarlet appeared on his chest. Unlike Hester’s, his was of flesh not fabric. It is revealed that Dimmesdale became a Masochist; beating himself as a repentance. The evil within him can be seen by Pearl, “Come away, Mother! Come away or yonder old Black Man will catch you! He hath got hold of the minister already.” (132). This minister was sickly, and worsened daily. He moved in with Roger Chillingworth, a learned physician, in order to resolve his illness. He falls back in love with Hester, and doesn’t realize that the exact same circumstances earlier produced Pearl. Eventually, Dimmesdale is completely overtaken by the devil, and it kills him, “Then, down he sank upon the scaffold!” (238).

Roger Chillingworth, the old physician, was Hester’s husband. He makes a secret pact with her not to reveal his true identity. With the purpose to learn more about Dimmesdale’s illness, he moves in with him, and eventually discovers that he is Pearl’s father. From that point on, he becomes a revenge-seeking leech: slowly sucking out the life of Dimmesdale. Many people began to believe that Chillingworth was, “”¦Satan’s emissary, in the guise of old Roger Chillingworth” (126). His heart was pure evil, fueled by hatred of the man who stole his wife.

Several other minor characters also had ties to the devil and witchcraft. Mistress Hibbons, the governor’s sister, was executed after the story takes place for witchcraft. She is the woman that tried to coerce Hester into signing her name in the Black Man’s book. Several other names are mentioned also. This is surprising, given the fact that the Puritans were such religious people. Evil seems out of place among a group that is supposedly very devout in its ways. But nonetheless, it existed.

Nathaniel Hawthorne, an author who commonly uses superstition and the “dark side” in his writing, once again uses it as a theme in The Scarlet Letter. It is a unifying theme among all the characters. All of the characters are connected to evil forces of some kind. Some, like Pearl, obviously have closer ties to the devil than others do, but not one of the characters is free of sin.

Witchcraft In The Scarlet Letter. (2016, Jul 17). Retrieved from https://studymoose.com/witchcraft-in-the-scarlet-letter-essay 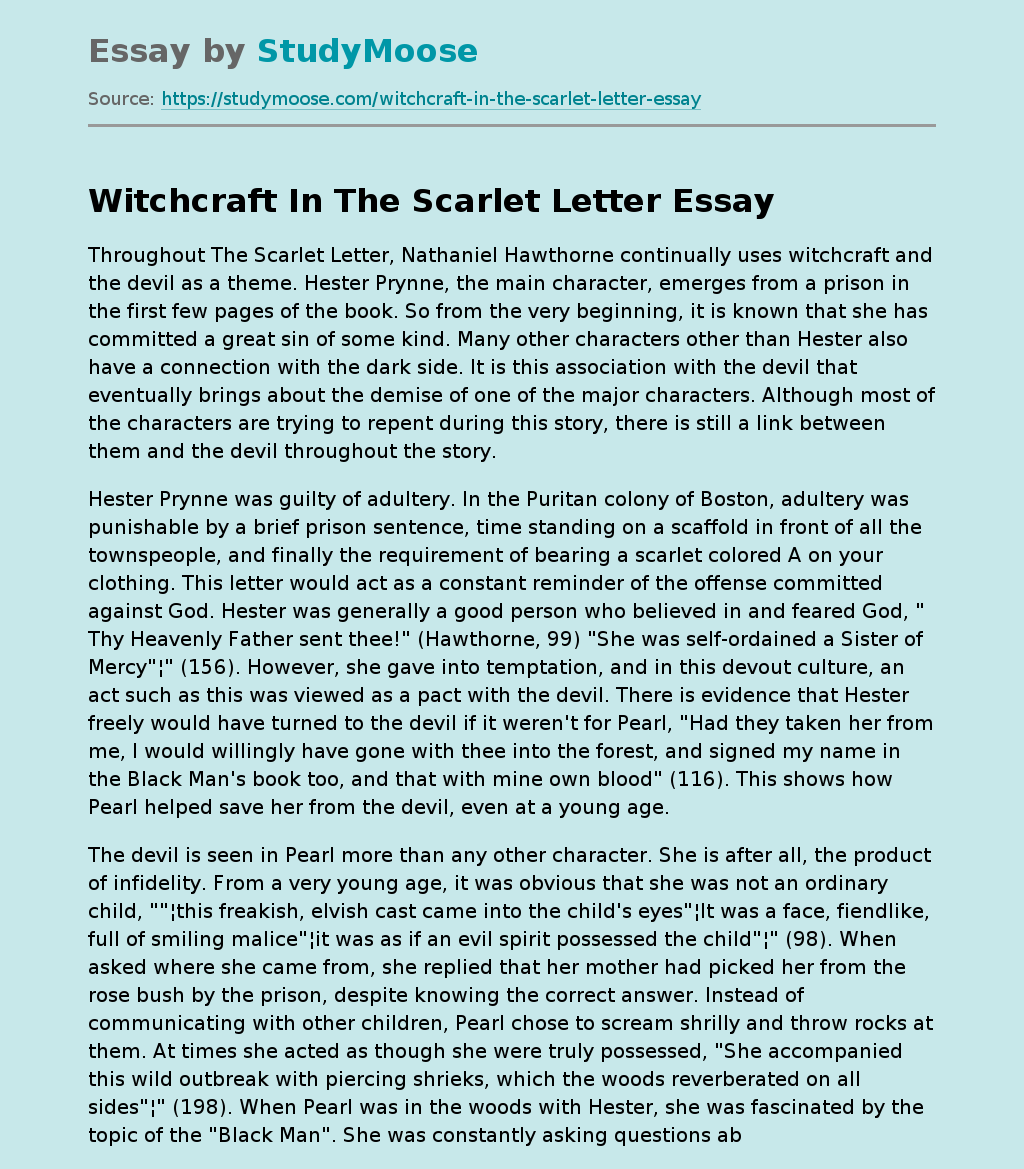