You will see why the framers chose Federalism and understand how Block Grants, Concurrent Powers, and the 10th amendment is important and ties into federalism.

A reason why framers chose Federalism is because the national government was not strong enough. The type of government that was already in action which was confederalism which made the states too democratic.

There was no leadership. The separate individual states were actually considered stronger than the central government. Which made it so that the national government was unable to enforce laws and collect taxes as well as recommendations, having no national court system effective. There was a big lack of unity and common laws because the states were too independent and full of themselves. Federalism, on the other hand, gave the national government the power that they needed to be more in control, let them enforce laws and collect taxes and balanced out the powers between the national and state governments.

Maintaining The Sovereignty of The States

Federalism also helped to maintain the sovereignty of every state. State sovereignty is the power of a state to do everything it can to self govern itself. This was very important because the states each valued their own uniqueness and this helped them to keep that. Each state was still able to have their own laws, build what they want, just as long as it didn’t conflict with the national government. For example, Texas could not make a law forbidding women to vote, because the national government has said that it is a right for all citizens of this country. There are many laws that the states may have, there’s traffic laws, criminal laws, property laws and many others. For example, Colorado is allowed to give the death penalty to someone who has committed a murder. Federalism made it so that the states were still able to do what they wanted to do, but with a little more control and organization.

Liberty is the condition of being free from restriction. It is the right to act, believe, or express oneself in a manner. The Framers of the constitution believed that any governmental power was a threat to our individual liberty, and that the exercise of governmental power should be restrained. They felt that to divide governmental power prevented the abusement of liberty. Since the powers is shared between the federal and state governments, it prevents either one of the governments from going corrupt and denying personal liberty. Federalism also protects the liberty of all persons within a State by ensuring that laws that are enacted in excess of delegated governmental power cannot direct or control their actions.

The 10th amendment is basically almost the meaning of federalism. This brief statement says “The powers not delegated to the United States by the Constitution, nor prohibited by it to the States, are reserved to the States respectively, or to the people.” Which means, the powers that are not granted to the National government are given to the states or the people. It states the idea that local and national governments should share the power of governing which is exactly what federalism is. The 10th amendment was written to emphasize the limited nature of the powers that were delegated to the national government. In delegating just specific powers to the federal government, the states and the people, with some small exceptions, were free to continue exercising their sovereign powers. It served as a wonderful compromise for both states and the national government as a whole.

Concurrent Powers is a big part of federalism. This is where the national government and the state government powers are shared. Concurrent Powers were mentioned by Alexander Hamilton in the federalist papers. He wrote that it was important for states to maintain their sovereignty and he felt that concurrent powers would help do so. For example, they each have the power to tax. The federal government has the power to tax its citizens, and the state government has the power to tax its residents. This refers to federal income tax which everybody pays and state income tax which is paid and imposed in the state which you live. Other concurrent powers includes building roads, protecting the environment, borrowing money, creating and enforcing laws, borrow money, create lower courts, and charter banks and corporations.

Block grants are grants from the central government to the state government with general provisions as to the way it is spent. They tie into federalism because it shows the unity between the central and state governments, they both cooperate to help communities and the people. States usually use block grants for welfare, social services, education and urban development. For example, when the Republicans retook Congress in 1994, they changed many federal grants into block grants. Instead of giving money to states to buy textbooks or repair schools, for example, Congress gave states blocks of money to spend on education in any way the states saw fit. Another example includes medicaid. It gives states the option to consolidate Medicaid and SCHIP funding into state acute care and long term care allotments. Block grants are very beneficial, they give more opportunity to state and local governments to help people in their communities. They also can reduce the amount of money spent on bureaucracy so that more can be dedicated to the area of need.

The framers chose federalism for distinct reasons. It was very important for us to have a stronger national government, the states were to independent and it was destroying the unity. We needed to maintain state sovereignty, the uniqueness of each state was very significant. Protecting our individual liberty was a must. It was necessary for us to continue to have our individual rights and freedom. The 10th Amendment, Concurrent Powers, and Block Grants all play very important roles when it comes federalism.

Without the 10th amendment, federalism wouldn’t even exist. If it weren’t for concurrent powers, the two governments would be very separated and not very unified. Federalism and the factors that influence it is extremely important to know about because it allows people living in different states with different needs and different interests to set policies suited to the people in their state, yet still come together with other states as one nation. It allows our nation to be more diverse and more unified, the way the nation should be. 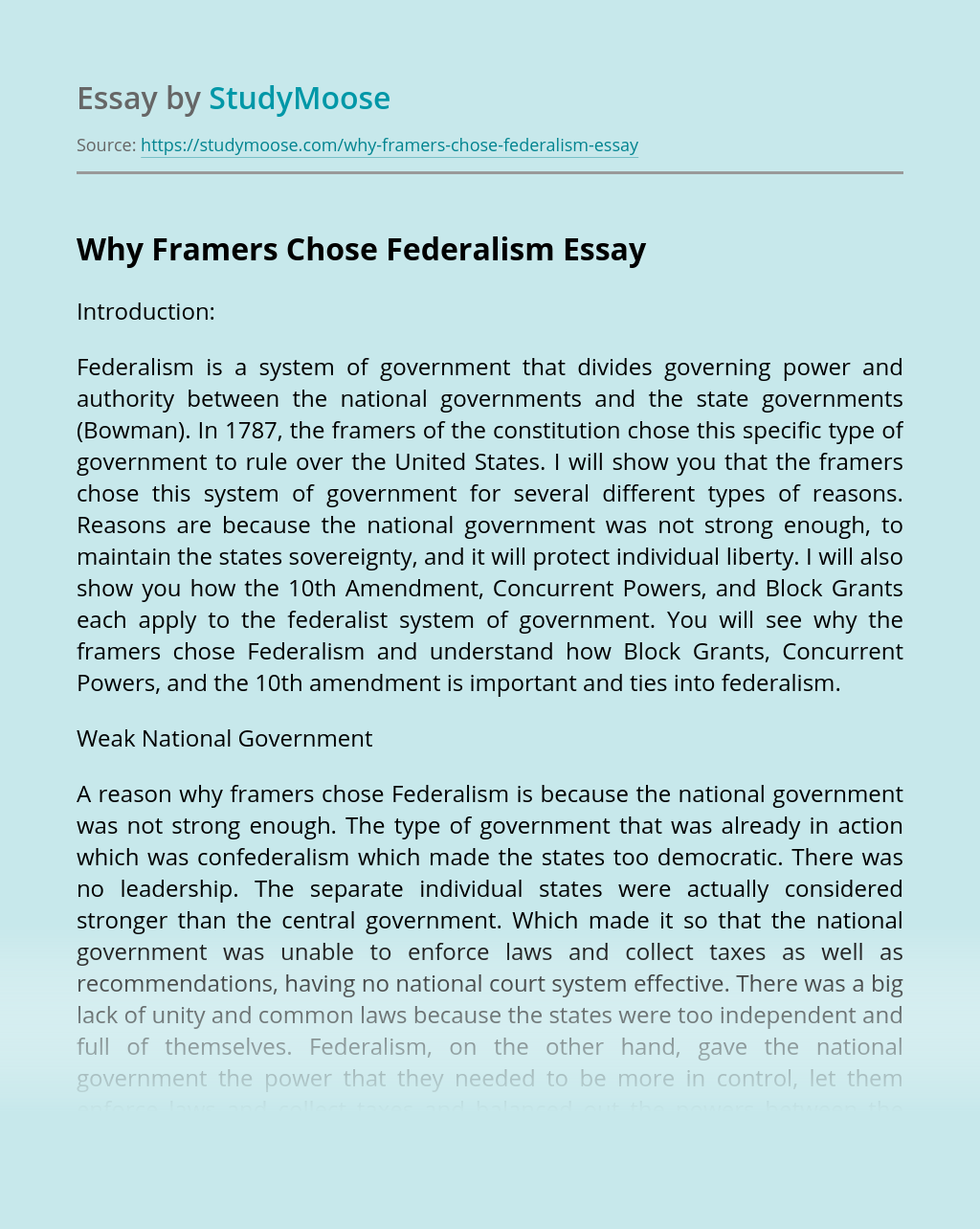 Don’t waste time
Get a verified writer to help you with Why Framers Chose Federalism
Hire verified writer
$35.80 for a 2-page paper
Stay Safe, Stay Original