Ai / three sources of information can come from the internet, your local library, and your most recent H & R hand book. Aii / the three aspects covered by law are the codes of practice, national occupational standards, and the legislation and government initiatives. B / Three main features of current Employment Legislation are Employment Rights, Equalities and Discrimination Law and Health and Safety Legislation.

Don't use plagiarized sources.
Get Your Custom Essay on Why Employment law exists Just from $13,9/Page

Aiii / Employment law exists to protect you, your safety and your human rights at the workplace for example working hrs, pay, breaks, discrimination, bullying etc. If this law never existed you could be working for a nominal amount and be made to do excessive hours with no breaks or be sacked at any time for no reason

My report on an issue/area of public concern related to the care profession – The death of Baby P.

The issue/area of concern raised in this report is as to how Peter’s death happened in the first place.

Peter Conelly also known as ‘Baby P’ was born in London, on the 1st March 2006, he sadly died on the 3rd August 2007 age 17 months. He died after receiving/suffering more than 50 injuries over a period of 8 months. During this time he was repeatedly seen by Haringey’s Children’s Services and its NHS professionals –

At the beginning of these 8 months Peter’s mother’s boyfriend moved into the home they shared, and this was kept from the police and the social workers. On Dec 11th 2006 Peter was taken to hospital with extensive bruising, the doctors referred the case to the Metropolitan Police’s Child abuse investigation team and Peter was given to a family friend to be looked after. The police then arrested Peter’s mother on suspicion of assaulting her son, she denied the claims. Peter was then placed on the child protection register. After just five weeks of being cared for by the family friend Peter was returned to the care of his mother. The police passed a file about Peter’s injuries to the CPS (crown prosecution service), which requested further investigation.

A little later the family are moved to a larger house and Haringey council appoints Maria ward as the family’s new social worker. Once again Peter is admitted to hospital, this time with more bruising, black eyes and swelling on his head. Peter’s mother justifies his injuries by telling the hospital they were caused by Peter being pushed into a marble fireplace by another child; this incident was not reported to the police, and Peter is later discharged from hospital. In June 2007 Peter’s mother’s boyfriend’s brother moves into the home with a 15 year old runaway, that he called his girlfriend. Later in June Maria Ward the families social worker alerts police after seeing bruises and scratches on…

Why Employment law exists. (2016, May 24). Retrieved from https://studymoose.com/why-employment-law-exists-essay 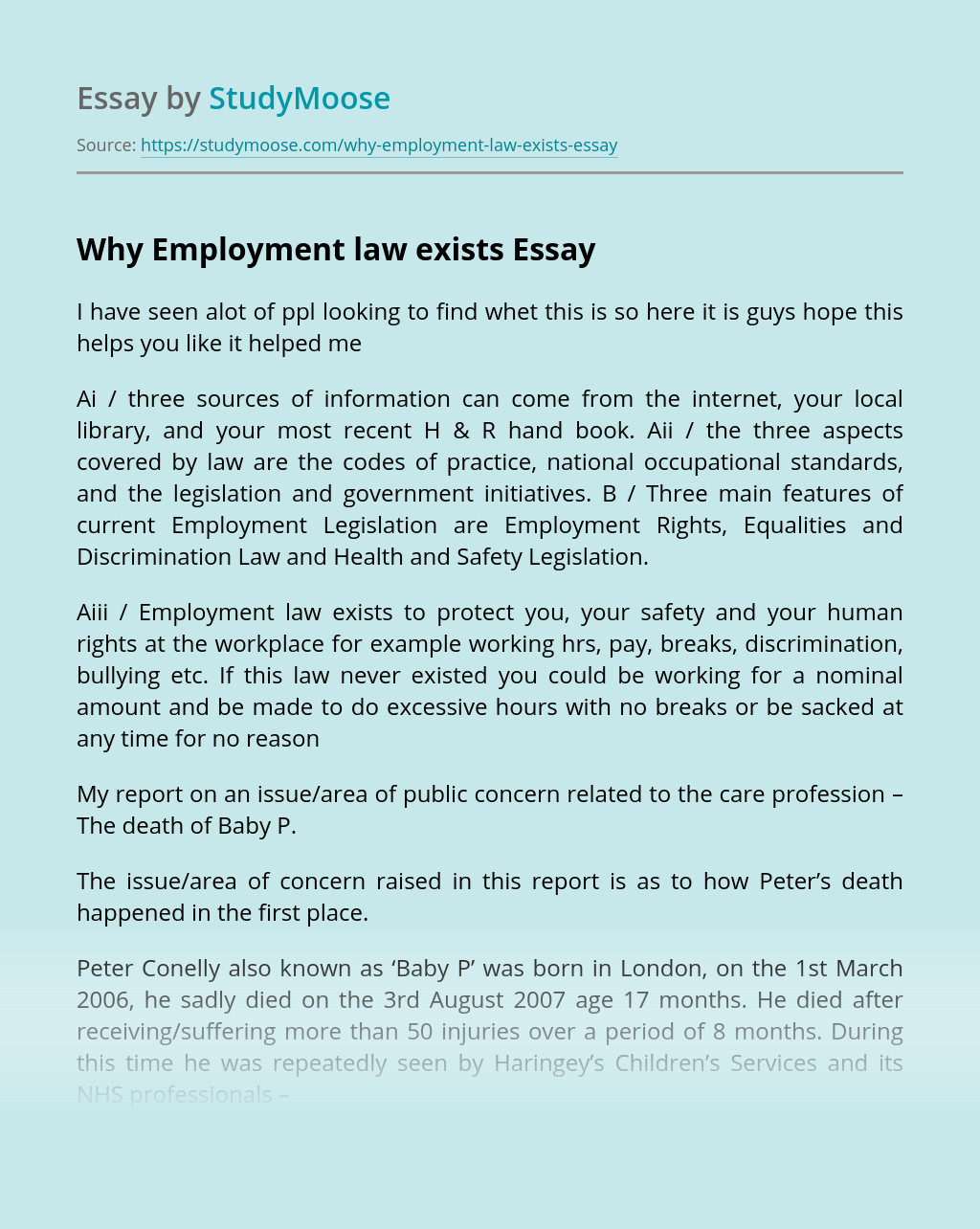 Legal and Ethical Issues at Workplace

Intro In this paper, legal and ethical problems will be gone over in connection with the present, previous and possible future habitability of the “health and wellness of workers,” which is currently an important problem was the state of each and every nation. Estimated mortality, together with the injury shows that a variety of companies...

Get Essay
Aging and Disability Worksheet

Part I Identify 2 or 3 issues faced by the aging population. 1 The older generations often time experience unequal treatment in the workplace and are subject to prejudice and discrimination. (Pearson, 2012) 2 Older members of society share physical differences that set them apart from the younger generations. (Pearson, 2012) 3 The aging population...

The elements of a Career Planning Programme

Discuss the elements of a Career Planning Programme. Explain some of the benefits of a Career Planning program to an organization. Answer. Career planning is a structured process for analyzing your skills and interests, formulating long-term goals and devising strategies to achieve them. As straightforward as this might seem, it can become complicated very quickly....

McDonald's Code of Ethics for Employees

The code of ethics that McDonald’s employees are expected to abide by is covered in the corporation’s Standards of Business Conduct document. Each year, all employees must sign a document certifying that they’ve read the document and will follow its precepts. Employees also attend training related to the ethical standards. The document is 40-plus pages...