Why College Athletes Shouldn't Be Paid?

Don't use plagiarized sources. Get your custom essay on
“ Why College Athletes Shouldn’t Be Paid? ”
Get custom paper
NEW! smart matching with writer

Title IX was passed in 1972, and states that all money should go equally for all sports and no team should be excluded. Originally this law was created to preserve equal rights for men and women. These days, the NCAA enforces this law to prevent athletes from receiving money. An example of this is the scandal that recently occurred at Miami University. Over seventy-two athletes at Miami University received improper benefits while attending the college. Now, several years later, the university is under investigation and will be facing some serious punishment from the NCAA.

Before the Title IX was passed, only 1 out of 27 women in college played sports. During this period of time scholarships for women were not often received. Since this law has been passed, more and more women have been given the opportunity to fulfill their dreams of playing college sports. “In 2006 -2007 there were 3 million girls participating in high school athletics. They made up 41% of high school athletes, even though they represent more than 49% of the high school student population.

“ (Nelson 1). This shows how greatly this law effects college sports.

By making it illegal to receive improper benefits, Title IX keeps colleges and universities from giving unfair advantages to their student athletes. Title IX has made a significant impact in many lives by preventing improper benefits from diminishing equality in college sports. If college students were to be paid, smaller universities and colleges would have an extreme disadvantage. Larger universities bring in a lot more money on average and would be able to pay a lot more to go out and recruit athletes, while smaller schools would be on a much tighter budget to.

If this were to happen, almost all high school prospects would end up at the larger universities from being drawn in by a paycheck. This could severely affect how well smaller schools compete in college sports. A lot of college athletes believe that they deserve to be paid, but in a lot of cases they sort of already are. College athletes who receive a scholarship to a university are saving themselves and their families an enormous amount of money. “Most do so while playing the sport they love and preparing for a future as a professional in something other than sports. Many receive athletics grants-in-aid that can be worth more than $100,000. (NCAA 1).

Leaving college without debt is a huge benefit that college athletes have over every other college student, and it is all thanks to scholarships. If we were to start paying athletes directly, would they use the money for school? Not everyone makes it to the pros, and getting a college degree is a great plan to fall back on. Many college students finish school with a huge debt that will take them many years to pay off. The average student today after college moves back home for a few years trying to pay off their student loans that college athletes don’t have to deal with.

During the college year, college athletes are also given the benefits of traveling, choosing schedules earlier, being excused from class, and becoming well known. For a college athlete to ask for more money based off the amount of things they already receive is just selfish. They have the life already and keep asking for more. With these benefits it would be a ridiculous to pay a college athlete on top of all the money they are compensated for already. While colleges make money off of certain sports, most commonly football and basketball, these incomes help support the ability to have many sport teams.

Likewise, almost all NCAA championships “lose money. ” However, overall NCAA revenue, primarily derived from the Association’s media agreements and the popularity of the Division I Men’s Basketball Championship, helps 400,000 student-athletes at more than 1,000 member institutions learn and compete in 23 sports and 88 national championships” (NCAA 2). Most colleges typically lose money on most of their sporting teams, and with the income from the few sport teams they are able to provide for other students. Since a lot of colleges are losing money in the industry, they wouldn’t be able to pay the athletes if they on’t generate revenue.

This would cause students to go to colleges that make money knowing they would be getting paid, compared to a college that doesn’t have financial stability to pay athletes. College would not be college anymore. The universities would become franchises and inevitably turn into a smaller version of the NFL. The law Title IX makes it mandatory for each team to provide the same amount of benefits to each student. From the incomes to these few sports, the less popular sports at schools would be cut because they do not have enough revenue coming in to pay the players. (“Student-athletes generate billions of dollars for universities and private companies while earning nothing for themselves. “)

This is indisputably untrue. Student-athletes earn free tuition, which over the course of four years can exceed $200,000. They are also provided with housing, textbooks, food and academic tutoring. When they travel to road games, they are given per diems for meals. They also get coaching, training, game experience and media exposure they “earn” in their respective crafts. The tragedy at the heart of college sports is not that some college athletes are getting paid, but that more of them are not. (Davis 1).

College athletes clearly earn enough benefits from the schooling and travel, to pay them anymore would be unfair and absurd. If college athletes got paid, they would no longer be referred to as student athletes. The outside view on college athletes would change drastically. As college students play a sport in college, their main priority is to be a student. If athletes got paid, their priorities would change and not focus on schooling like they should. This would damper their college careers by taking away their devotion to achieving good grades and doing well.

It also would cause various arguments like who should be paid, and what amount? Problems on which athletes to pay would arise if college athletes were to receive money, and the amount each student deserves. Would you pay the back up soccer goalie the same as the starting quarterback? Some sports that make larger revenue for their school, typically in football and basketball, should not get more money. It wouldn’t be fair to pay a college football or basketball player more just because their sport brings in more money. Paying them would only bring better athletes.

Better athletes would bring bigger crowds, and bigger crowds would cast a shadow over the other sports at colleges. “Critics argue that student-athletes generate large amounts of money for the institution and therefore should be compensated. That argument ignores the fact that intercollegiate athletics programs are necessarily composed of many sports, many of which generate significant expenses over revenues. Only about two dozen programs nationally, all of them large Division I programs, actually yield revenues over expenses after the bills are paid.

The remainder relies to varying degrees on institutional financial support. ”(NCAA 3). If each athlete deserves an equal share, than once it’s broken up between every athlete throughout the school, it wouldn’t be much money at all. While most programs lose money, the few that make money do not make enough money, which would even make a difference once split up. Critics also don’t realize that maybe increasing revenue in one sport, may diminish others. People who agree with college athletes being paid for playing may not realize a couple of things.

Schools would have to eliminate sport teams that do not post revenue each year, and even some of the biggest football schools actually lose their school money, meaning they would have to go too. “Some pay-for-play advocates suggest eliminating non-revenue sports and paying football and men’s basketball players because of the perceived profitability of those sports. In fact, however, only 30 percent of Division I football and 26 percent of Division I men’s basketball programs post revenues over expenses” (NCAA 4).

If schools were to eliminate their programs, that means they would lose 70 percent of the amount of teams they currently have and basketball alone would lose close to 75 percent of their teams. This would be ridiculous for a school to lose all their programs. It would in fact diminish the amount of college athletes. There have been college athletes who have been caught receiving improper benefits, and lose everything they achieved while in college. For example, Reggie Bush, the former star running back at The University of Southern California.

Reggie got caught receiving improper benefits years after he was at USC. The year Reggie Bush won the Heisman Trophy was 2005, later he was stripped of all his awards and achievements including the Heisman Trophy years after being caught. “Bush and his family received more than $100,000 worth of financial benefits while he was at Southern Cal. His parents allegedly shacked up for free at a $750,000 California house and received $28,000 to help settle past debts. ” (Purdum 1) By receiving improper benefits, Reggie Bush was the first player ever to be stripped of the Heisman Trophy.

He let down his team, university, and more importantly himself. As the scandals continue to arise on whether college athletes should be paid, it has become clear that these athletes receive more than enough. After all the free education, benefits, travel, and fame, the last thing college athlete’s need is more money. We have seen money destroy professional teams, organizations, and players. Hoping to eventually go pro and get paid, college athletes are motivated to do their best and make it to the next level with their pure desire to win.

Why College Athletes Shouldn't Be Paid?. (2016, Dec 20). Retrieved from https://studymoose.com/why-college-athletes-shouldnt-be-paid-essay 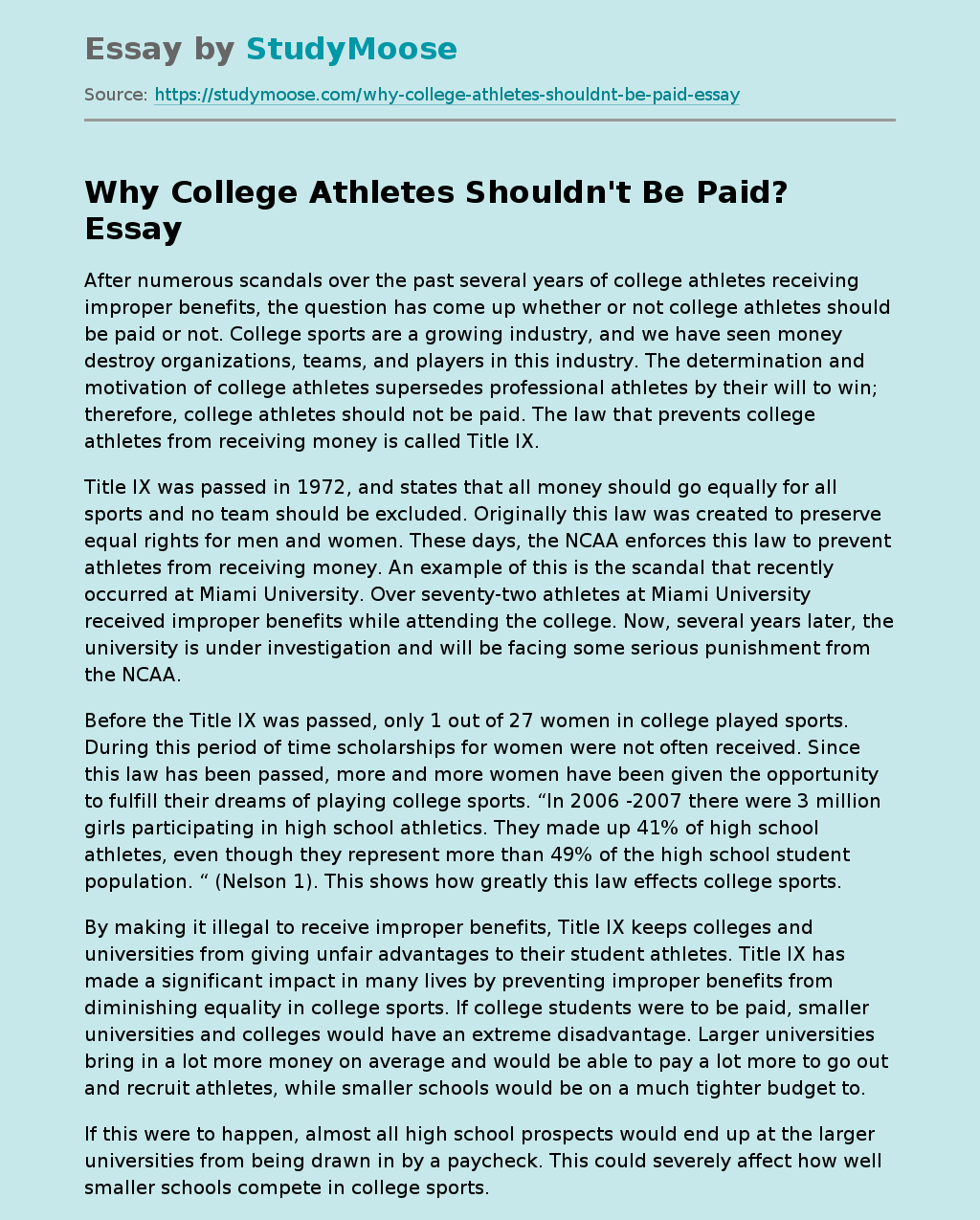