Children Should Be Paid for Doing Chores

Topic: Children should be paid for doing chores

It is common knowledge that household chores such as doing the dishes, cleaning rooms, throwing the garbage are not really entertaining activities to the majority of people, especially to children. That is why some parents who are totally aware of the power of the influence of money, expect that allowance relied to chores can be a productive way not only to incite children to do the chores but also to teach them the value of money and hard work.

Don't use plagiarized sources. Get your custom essay on
“ Children Should Be Paid for Doing Chores ”
Get custom paper
NEW! smart matching with writer

However, the negative influences that money can bring make parents doubt to this method. Although some people claim that children should be paid for doing chores, it is my contention that paying them leads to slippery slope effects.

Proponents of allowance relied to chores argue that this method teaches children to manage their own money. However, this is not the only way to make them acquire this notion of management. Parents can give them a monthly pocket money separated to the chores, for instance.

Suppose a little boy gets 2500Ar of pocket money a month. If he wants to buy a 5000Ar-video game, he can decide either to spend it for a cheaper one or to save it and wait the next-month-pocket money to buy it. Therefore, children can manage their money else way than getting allowance for chores.

Motivation through money may not work and can even be counter-productive, despite the fact that pro-payment for chores claim that it motivates children to do the chores.

For example, if a child decides that he/she doesn’t really need a dollar today, it won’t be hard for him/her to decide not to do the chores. Besides, according to psychologists’ researches, young children who are rewarded for drawing are less likely to draw on their own that are children who draw just for the fun of it. In other words, if we reward children with money for doing chores, they will be less motivated to do them.

Not only can this reward method demotivate children from doing chores but, it also teaches them love only for money. In fact, they can ask their parents for an allowance raise; otherwise, they won’t do their household tasks. Dean Mehrkens, a parent who tried the pay-per-chore-system, declared that, due to this system, his three-year-old daughter refused to do anything unless there was some kind of compensation. Furthermore, he added that it made it difficult to correct or discipline a kid for doing what we’d taught him to do: except payment for everything. Consequently, the more parents reward their children with money for doing chores, the more materialistic and demotivated they will be.

The most famous argument that pay-per-chore parents advance is this is a mean to make children realize they need to work hard to be well paid; nevertheless, chores are all family members’ responsibilities and not a work at all. Actually, unless it’s their professions, parents are not paid for doing the chores. So, why should children be paid while they won’t be later? Besides, instead of asking their parents allowance for chores, children should be grateful towards them for being taken care of by them and do their duties for free.

That’s exactly the message that Marie Laforêt wanted to pass on in the lyric of her song entitled “Gift”: “Last night, while I was cooking in the kitchen, my son came in and held out a sheet of paper to me […] I read it. And, that’s what it was saying: ‘For having done my bed the whole week 3 francs. For taking out the waste-paper basket 75 cents.[…] For having watered the flowers of the balcony 25 cents. Altogether it’s 9 francs and 85 centimes.’ So, I picket his pencil, I returned the sheet and that’s what I wrote: ‘For nine months of patience and twelve hours of suffering, it’s free. For so many sleepless nights, watching your sleep, it’s free. For rides, toys, and school it’s free. And if we have a look at it, the total of my love is totally free.’” We also have to take into consideration that children can have extra-work activities so as to make them understand this work ethic. Besides, most financial and child-development experts agree that paying children for extra-jobs that are outside their normal set of chores is a good idea. They can, for instance, mow the lawn, feed their neighbors’ pets; and sell cakes, cookies, and lemonades. Thus, if they want their children to get this work ethic, parents should incite them to do extra-jobs.

It is evident that money has nothing to do with chores which are family duties. It overshadows the good reasons for doing household tasks. Indeed, when children do chores, they receive a sense of accomplishment, pride and increased self-confidence for a job well-done. Sometimes they also want to please their parents. As a consequence, putting a monetary value on chores eclipses all of those benefits. In other words, they will begin to work for allowances instead of their parents’ praise. Besides, not only does payment can cause children’s discouragement for doing chores, but it can also make them more materialistic. Finally, as parents are not even paid for doing chores and are already in charge of their children as well, the latter should thank their parents by doing the chores without payment. Thus, instead of chores allowances, kids can get pocket money, or do extra-jobs to understand work ethic and money management. That’s why I firmly believe that children should not be paid for doing chores.

Children Should Be Paid for Doing Chores. (2016, Mar 24). Retrieved from http://studymoose.com/children-should-be-paid-for-doing-chores-essay 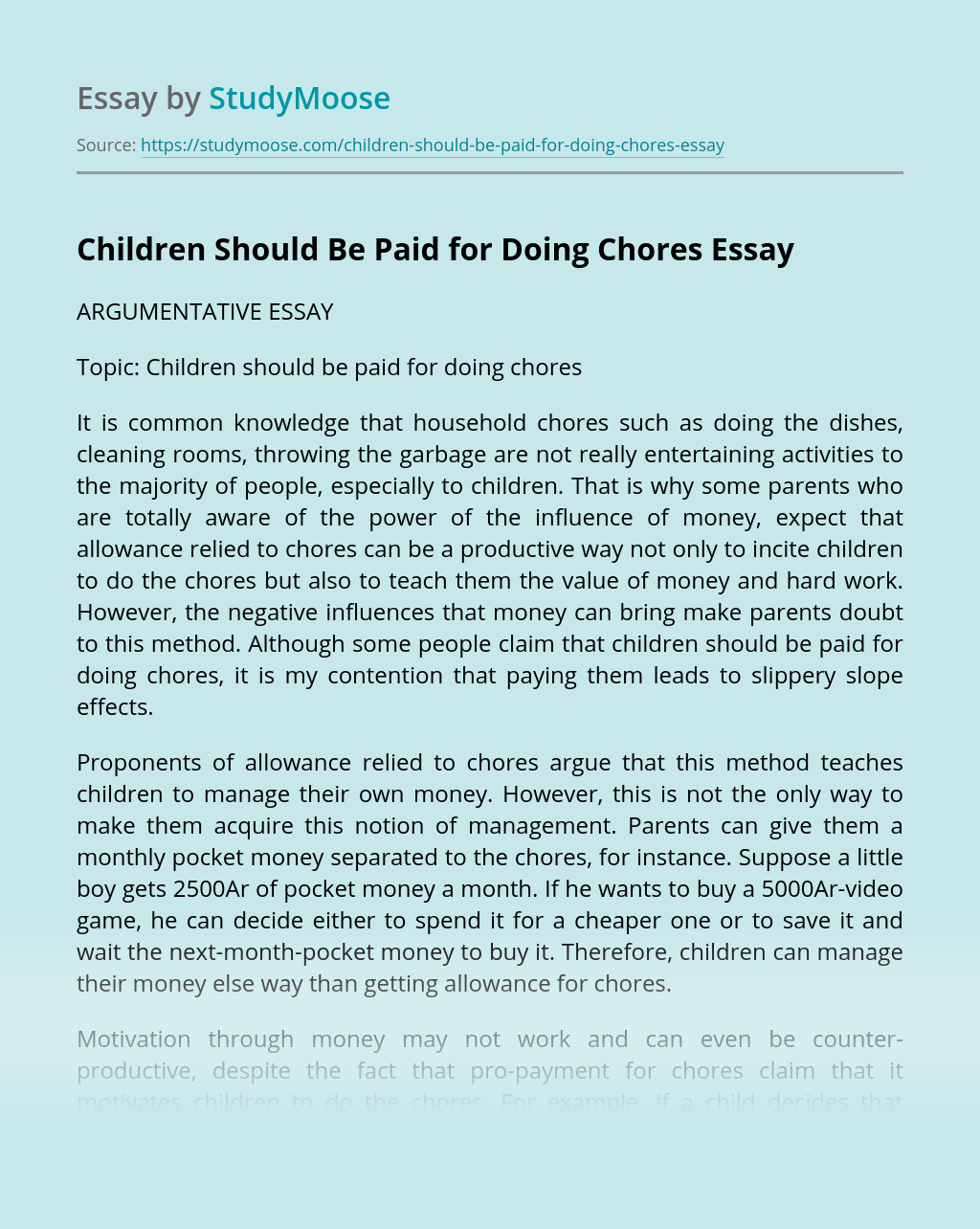