Who was to blame for the Cold War?

During the Cold War, both USA and USSR have faults. But Stalin’s action was most to blame. He has the most aggressive actions compared to the actions done by USA. He did not keep his promise which he had agreed at the Yalta Conference. He had dominated the countries in East Europe and spread Communism, causing dictatorship and people imprisoned due to the disloyalty towards Stalin. Also, a lot of Stalin’s actions had offense USA. However, things done by Truman such as the propagandas posted and increased weapons plus army force was only to defend USA from attacks by other countries.

Don't use plagiarized sources. Get your custom essay on
“ Who was to blame for the Cold War? ”
Get custom paper
NEW! smart matching with writer

Stalin did not do as The Big Three, Churchill, Roosevelt and himself, agreed at the Yalta Conference. They agreed that they would hunt down and punish any war criminals who were responsible for the horrors of the Nazi concentration camps. But due to the non-aggression pact signed by Hitler and Stalin in 1939, Stalin did not send any troops to help USA to hold back Hitler in Russia.

This worried USA because it was a sign that Stalin was not standing at a totally opposite of Hitler. Under this relationship, Stalin might betray USA and Britain which he should not do. They had also agreed to hold free elections for people to choose the government they wanted to be in their countries. But Stalin set up communist governments in the countries in Eastern Europe. He ignored the wishes of the majority of the people. These actions had offended the agreement between The Big Three.

Stalin had not act according to USA and Britain’s expectations either. USA did not expect that Stalin was not withdrawing the Soviet troops in Eastern countries such as the Baltic States, Finland, Poland. Stalin did not listen to Britain and the USA’s protest but only following his own desire. He had started to spread Communism. He turned into USA’s enemy and continued dominating countries in the Eastern Europe. He claimed that this was the “Soviet sphere of Influence”. To him, this sphere of influence meant to invade and control all of the countries. But to USA, it was just remaining a good relationship between one and another. Countries can have independent economies and rulings. Stalin did everything according to his will. He did not consult others opinion and held up a dictatorship in Eastern Europe.

Stalin not only had communist governments in Eastern Europe, he had ruined a lot of people’s lives under this control. He required everyone to be loyal to him, if not they will be imprisoned. For the people who are working for him in the Cominform, they should not be independent-minded, or else, they will be replaced by others who were completely loyal to him. This had shown Stalin’s strong intention of ruling all the countries at first. He had always planned to have power on all the countries he had dominated rather than providing free elections and help to restore Germany’s economy.

Moreover, Stalin had a lot of aggressive actions. These actions had alarmed other countries such as USA and made them angry. He accused USA with a lot of propagandas. Sometimes, even including some fake ideas in his propagandas in order to leave a bad impression of USA to his people. Afterwards, he blocked all the linkage between West Europe and West Berlin, known as Berlin Blockage, because he wants to keep Germany cripple. This action had shown Stalin’s intention to interfere the economy of countries which belongs to the West. Most of Stalin’s action were provocative and were very offensive towards USA.

However, USA also had some faults in the Cold War, but these reactions were only to defend it own country. USA had produced propagandas which was also one of Stalin’s action. Same as Stalin, President Truman wanted to tell his people that Communism is not good for an economy through his propagandas. Also, USA had increased the number of weapons and army. An atomic bomb was even invented. They did that because they wanted to prevent themselves from being attack by other countries, possibly USSR. In addition, western countries had sign NATO, which was an agreement to work together. Although members of NATO agreed to fight against other countries, this was only when one of them was attacked. So, what USA did during the Cold War was only reactions to Stalin’s action. Truman was trying to protect USA from others offense.

In conclusion, Stalin’s action was offensive to USA, but USA’s actions were only to protect and defend itself from attack by others. Stalin’s actions were aggressive and offensive. He ignored opinion from other countries and the public. He spread Communism across Eastern Europe and also had intention to block Western Berlin from Western Europe. However, the reactions such as propagandas and increasing of military force of USA were not to attack USSR. These preparations were to fight back if they were attacked. So therefore, USSR was to be blamed for the Cold War. 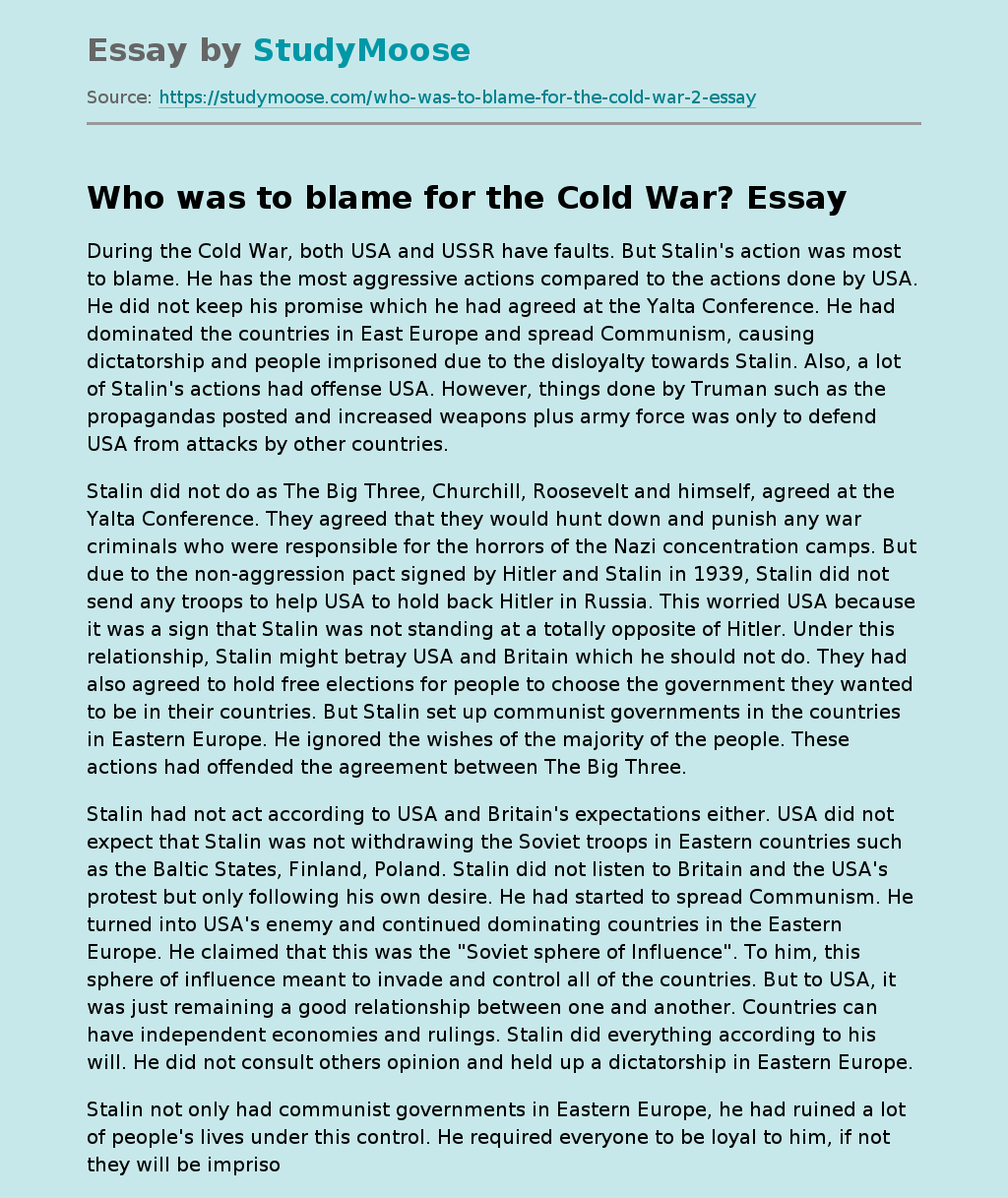