Who is Stephen William Hawking?

Stephen William Hawking (January 8, 1942 – March 14, 2018) who study on theoretical physics and cosmology was a British physicist. He worked at the University of Cambridge as a professor by doing research at the Centre for Theoretical Cosmology. In his goal, he focused on the study of gravity, black holes, and universe. At the same time, he was an author as well, he wrote several books in cosmology and the most famous one is “A Brief History of Time” which published in 1988 and explained the exist of universe.

Don't use plagiarized sources. Get your custom essay on
“ Who is Stephen William Hawking? ”
Get custom paper
NEW! smart matching with writer

In this book, he used common expression to explain what he observed from the universe which help publican clearly understand the universe and willing to read it. He said “My goal is simple. It is complete understanding of the universe, why it is as it is and why it exists at all” (“Stephen Hawking”, 2018) Furthermore, Hawking had a motor neuron disease (also known as amyotrophic lateral sclerosis ‘ALS’) which cause him gradually paralyzed. In his later life, he only can speak through a speech-generating device by using a single cheek muscle.

However, he didn’t stop his step, still give speeches and spread his idea. This is why a lot of people are admired him.

In Stephen Hawking’s family, his parents were all grated from Oxford University and the Hawking family was considered highly clever and somewhat abnormal by their neighbor because they all like to read books and even during their meal. Moreover, Hawking like science in 15 years old he build up a computer with his math teacher.

By inspiring of his math teacher, Tahta, he decided to study math in the university. At that time, his family wanted him to apply to Oxford University; however, it was impossible to major in math at Oxford at that time, so instead of math he change to physics and chemistry. Therefore, Hawking entered Oxford with scholarship in 17 years old. After he entered Oxford, he found the academic work is much easier than he thought before, then he started to join club and handed out with friends. Since he spend a lot of time outside the studing, his finals become a challenge. Thus, in the finals, he decided to only answer theoretical questions which don’t require factual knowledge. Then, he pass the test and graduated from Oxford University. After he graduated, he wanted to study cosmology, but there was no professor studying cosmology in Oxford. Hence, he decided to go to the University of Cambridge. Since he wanted to be a student of Fred Hoyle, the most famous cosmologist in the UK. However, after he started to study in the Cambridge he felt disappointed because he had been assigned Dennis Sciama rather than Fred Hoyle. In addition, he was diagnosed with amyotrophic lateral sclerosis at that time. It all made him felt depressed and want to quit his educate. Fortunately, by his professor, Sciama, encouraging, he chose to return to his work. Inspired by Roger Penrose’s research about the singularity, he started to use it be a topic of his thesis. It also began Hawking’s research on the universe and black holes.

In his study, Hawking focused on universe especially black holes. His main contributions in science are two, one is the singularity theorem in 1970 and the other is Hawking radiation in 1974. The singularity theorem, in generally is that the universe must have from a point. Before he started to do research on initial singularity, the mathematician Roger Pentose already started it by using calculation. In 1968, Hawking verify that Big Bang which is the event that universe started to found is really exist and it also can show the exist of an initial singularity. In 1970, He cooperate with Pentose to extend the singularity theorem that the universe was create itself from an initial singularity and the time and space are also create from this singularity. This theorem also base on Albert Einstein’s General Theory of Relativity that if universe have enough mass, universe must start from a singularity. Stephen Hawking wrote these discovering in his first book as well, The Large Scale Structure of Space-Time, that mainly explore the infrastructure of time and space and talk about the exist of the singularity. After the study of the singularity came to an end, Hawking began to study black holes. In 1971, he published three papers. First one was that the black hole exist in the universe and made of high temperature and high pressure due to the Big Bang. Second paper talked about black hole only has three properties which are mass, angular momentum, and charge. Third stated that the surface area of the black hole would never decrease and this also named as the second law of black hole dynamics. The reason why the surface of black hole cannot decrease was because no particles could escape from the black hole. So, the mass of the black hole would keep increasing. Moreover, the surface area was based on its mass. Therefore, as the mass kept increasing the surface area would never get smaller.

Who is Stephen William Hawking?. (2021, Apr 15). Retrieved from https://studymoose.com/who-is-stephen-william-hawking-essay 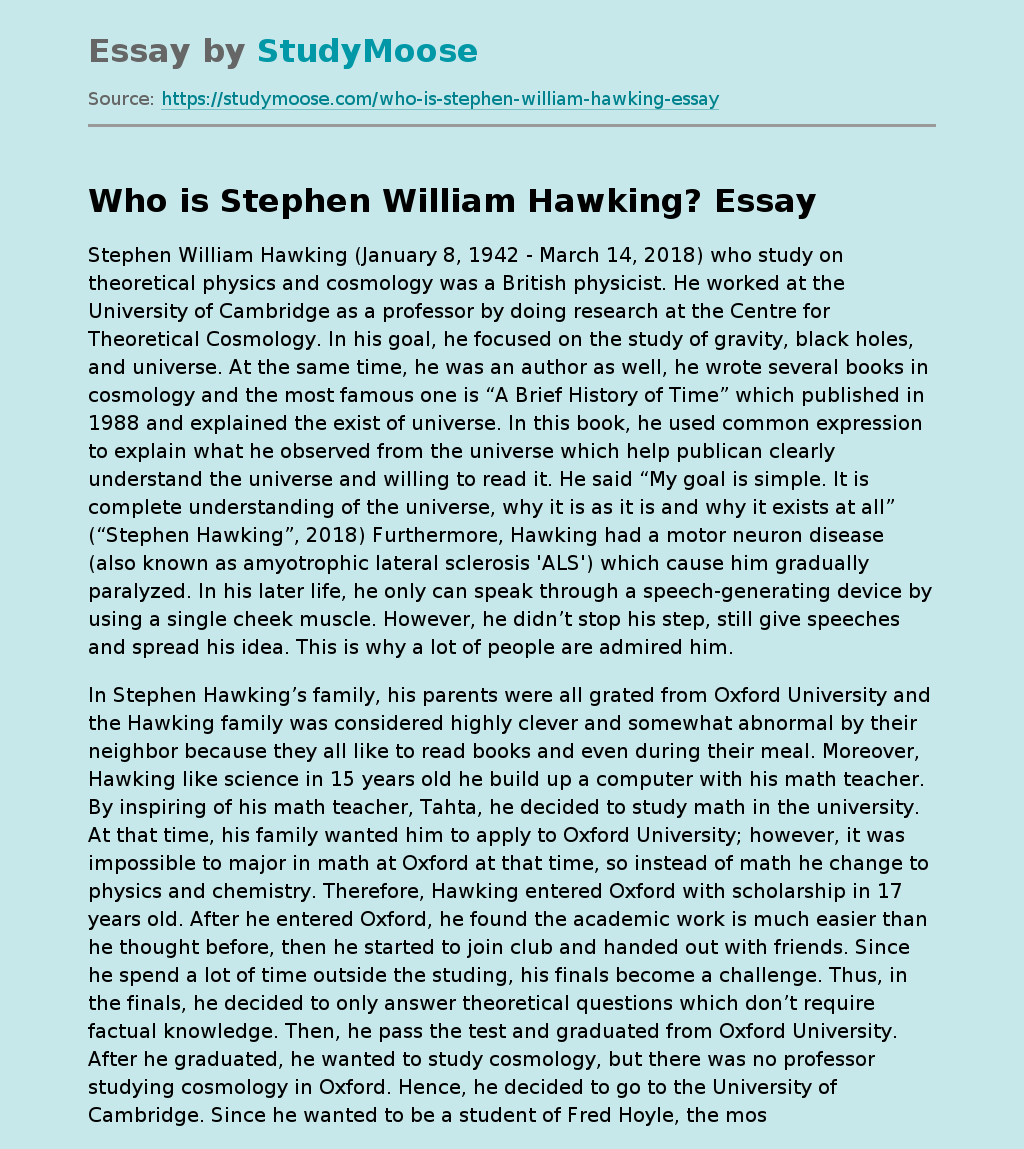