Who Do I Want to Become a Psychologist?

So, I want a PhD in neurocognitive or cognitive psychology because:

1) I was made to be a psychologist.

As a preteen, for all my science fair projects leaned in the direction of psychology (one year I remember trying to test my classmates’ mood at different times during the year to examine the mood- weather relationship). The first time I seriously became interested in neuroscience/psychology I was 20 years old or so– my cousin had just committed suicide at the time and I was looking for answers (especially because I had been having suicidal thoughts for a couple of years before his death…which is scary because I wasn’t even 21 yet).

Don't use plagiarized sources. Get your custom essay on
“ Who Do I Want to Become a Psychologist? ”
Get custom paper
NEW! smart matching with writer

It was easier for me to accept the fact that he was ill if I had physical “proof” that his brain (and mine) was different. I also grew up with a schizophrenic aunt. She used to tell me that there were people who were talking to her and that her thoughts were being recorded… I always wanted to know what she saw.

This was about the age when I started feeling guilty for how I had treated her when I was younger (at this point I may have been a bit older … like 25).

I also have another bipolar aunt, who, at the time, kept trying to kill herself every few months (actually when I was around 13, she once told my mom she wanted to speak with me, and then told me that she was going to kill herself… yeah, it’s messed up).

All this combined with my own manic and depressive episodes I frequently questioned reality when I was my normal self. The fact that physical changes in the brain could create these differences in the intangible…I believed that I could have all the answers to my questions about my reality, and my illness if I could understand the brain

This lead me to…

2) As a result of experiences during my early adult years I gradually became an spiritual and not claiming a religion, but my first research methods/experimental psychology class was a religious experience. That sounds over the top, but research is the only means by which I can answer the questions I have about my mental life: psychology is my religion. Training to become a better researcher helps me make sense of my meaningless world. So, I want a PhD to become a better researcher.

3) I enjoy debating and creating experimental designs to answer the many, many questions I have about different aspects of human cognition…and I tend to find questions everywhere. I have been known to spend weeks on literature reviews based on something I disagreed with in a random NYT article and then create hypothetical designs based on what I’ve found. I already do it for free– I think it’s high time I get paid for it. A PhD program will pay me for it. I also want the ability to turn my hypothetical designs into actual research… I can’t do that without the independence a TT job will get me or the training I will receive as a doctoral student and a post-doc fellow.

That’s why I want a PhD in psychology. I have a passion for research in psychology and would have little credibility without a PhD. I will not be able to secure the grant money I may want for what ever I want to do in the future and I don’t want to be dependent on other faculty members forever. A PhD and a TT job will give me the freedom to do what I want in terms of research… I guess that’s my real answer.

Now, if only I were allowed to be this truthful in a personal statement…

Also, being called “Dr.” is kind of cool… but it’s not like people in our field call each other doctor… And, to my family, I’ll never be a “real” doctor because I will not have an MD. I’m a felon, it’ll never happen.

Who Do I Want to Become a Psychologist?. (2016, Nov 21). Retrieved from https://studymoose.com/who-do-i-want-to-become-a-psychologist-essay 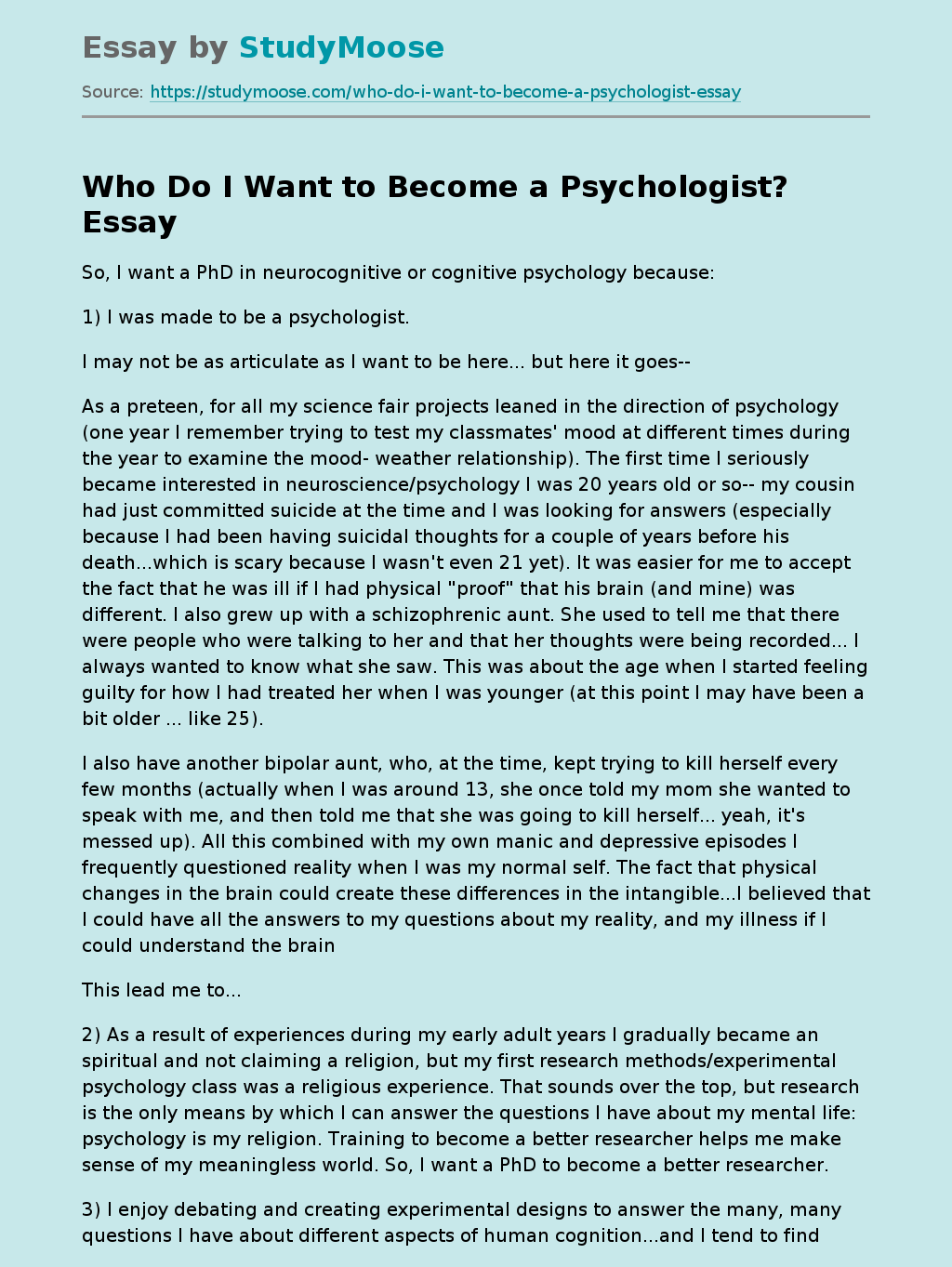