A few years after Erik’s birth, her mother took him to a local jewish pediatrician, Dr. Theodor Homburger for a treatment of minor illness. His mother and the pediatrician eventually fell in love. He quickly developed a sense that something was wrong his mother and father were Jewish his own physical appearance was clearly Scandinavian. later on he found the truth about his heritage, his identity crisis was worsened. Rejecting his stepfather’s plea to become physician. He went to Europe and enrolled in art school and eager to learn about culture and history.

Don't use plagiarized sources. Get your custom essay on
“ Biography of Psychologist Erik Erikson ”
Get custom paper
NEW! smart matching with writer

He returned home at the age of 25 prepared to settle down and teach art for a living.

Erikson was asked by his former high school friend Peter Blos to join him as a teacher in Experimental Nursery school in Vienna where he met Anna Freud and her famous father Sigmund Freud. Anna Freud was trying to convert psychoanalytic interest in childhood experiences of adult. Erikson shared her pioneering interest and was eventually trained by her as a child analyst.

Erikson was still unsure to earn his living a psychoanalyst because still wanted to paint and draw. However, he began to see a connection between psychoanalysis and art. He observed that children’s dream and play involve important visual images that only later are translated into words in therapy.

Erikson’s position represents a systematic extension of Freud’s view of the role of ego in personality functioning. Erikson is a Freudian ego-psychologist.

Ego functions to help individual adapt to challenges presented by the surrounding.

Emphasized the integration of biological and psychosocial forces in determination of personality functioning.

The idea that human development is governed by a sequence of stages that depend on genetic or hereditary factors This principle says that we develop through a predetermined unfolding of our personalities in eight stages. Our progress through each stage is in part determined by our success, or lack of success “crisis”, in all the previous stages. Crisis defined as the crucial period in every stage.

Feeding
Children develop a sense of trust when caregivers provide reliability, care, and affection. A lack of this will lead to mistrust. Early Childhood (2 to 3 years)
Autonomy vs. Shame and Doubt

Toilet Training
Children need to develop a sense of personal control over physical skills and a sense of independence. Success leads to feelings of autonomy, failure results in feelings of shame and doubt. Preschool/Play Age (3 to 5 years)

Exploration
Children need to begin asserting control and power over the environment. Success in this stage leads to a sense of purpose. Children who try to exert too much power experience disapproval, resulting in a sense of guilt. School Age (6 to 11 years)

School
Children need to cope with new social and academic demands. Success leads to a sense of competence, while failure results in feelings of inferiority. Adolescence (12 to 18 years)
Identity vs. Role Confusion

Social Relationships
Teens need to develop a sense of self and personal identity. Success leads to an ability to stay true to yourself, while failure leads to role confusion and a weak sense of self. Young Adulthood (19 to 40 years)

Work and Parenthood
Adults need to create or nurture things that will outlast them, often by having children or creating a positive change that benefits other people. Success leads to feelings of usefulness and accomplishment, while failure
results in shallow involvement in the world. Maturity(65 to death)

Reflection on Life
Older adults need to look back on life and feel a sense of fulfillment. Success at this stage leads to feelings of wisdom, while failure results in regret, bitterness, and despair.

Comprehensiveness
It addresses itself to wide variety of phenomenon both normal and abnormal and seeks to biological, social, cultural and historical factors.

Within Psychology, Erikson’s work has contributed directly to lifespan psychology and the development of adult psychology.

Erikson’s work has practical impact in the area of child psychology and psychiatry, counseling, education and social work.

Erik Erikson articulated psychosocial stage describes the life cycle hallmarks of white, western society and may not apply well to other cultures or even to our own today/present time. Erikson’s positive outcome (such as autonomy, initiative, industry) virtues (such as will, purpose and competence) are frequently seen as characteristics of healthy male development. And his negative ones, (doubt, guilt and inferiority) are seen as reflecting unhealthy female development. Gilligan’s studies of girl and women’s development suggest different positive values emerge in healthy development. Connection, responsibility, and care replace autonomy, mastery and power.

Erikson’s theory fails to meet the criterion of precision and testability. He defined the concept of ego to sustain sameness and continuity in the face of changing fate. Evidently the concept is extremely complex and does not readily precise measurement.

Erikson believed that social and historical factors affect the formation of ego identity, which in turn affects the nature of the personality. One such example of the work of social factors in personality development is the women’s movement. Studies have found that most adolescent women today include a career orientation as part of their ego identity. Research in the area of identity crisis show that this stage may begin around 12 and be resolved by the time a person is 18. However, for some people, identity may not occur until as late as age 24.

Erikson believed that people in the maturity and old age stage of psychosocial development spend time recalling and examining their life, accepting or regretting past choices. However one study showed no significant differences between younger adults compared to older adults in reported frequency of life reflections. However, younger people engaged in reflection to gain self-insight and find solutions to current problems, while older people used reflection of their past to evaluate their lives.

Erikson used play therapy to conduct research on his theory, focusing on what he called play construction. In his studies, boys and girls constructed a scene for an imaginary movie using dolls, toy animals, automobiles, and wooden blocks. Girls tended to build low enclosures, while boys focused on exteriors, action, and height. Based on biological differences, according to Erikson; girls build low enclosures in which people are walled in, and boys would build towers. Research today still persists that traditional gender stereotyping between girls and boys exists. Girls typically play with dolls, jewelry, and toy kitchen implements, while boys play with trucks, soldiers, and guns.

“Our greatest weakness lies in giving up. The most certain way to succeed is always to try just one more time. And anyone who has never made a mistake has never tried anything new” 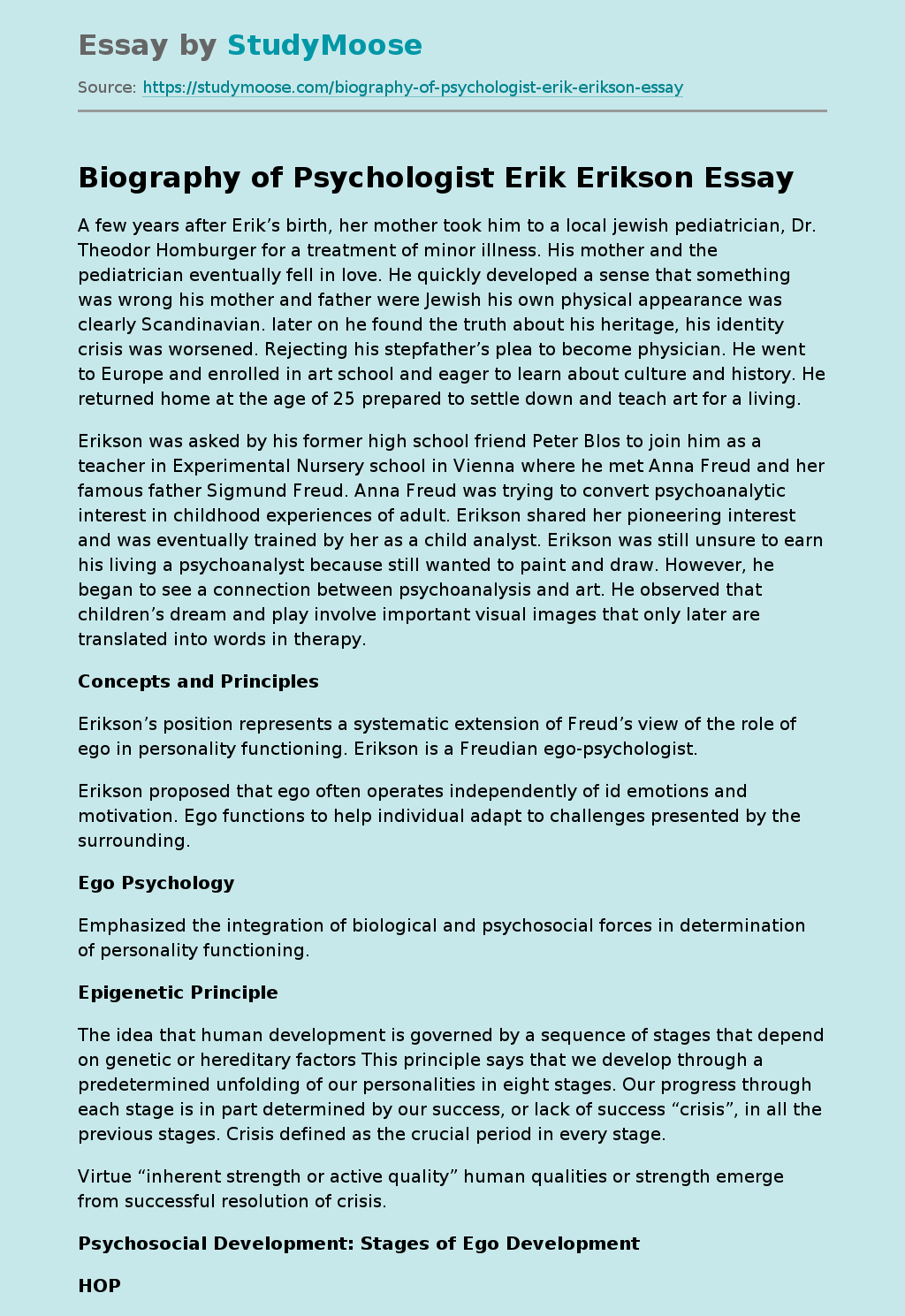