Peggy McIntosh’s piece “White Privilege: Unpacking the Invisible Knapsack” describes the privileges white people gets without realizing their advantage over others. Peggy talks about racism being a part of everyday life even though we ignore it. Her main idea was to inform the readers that whites are taught to ignore the fact that they enjoy social privileges that people of color do not because we live in a society of white dominance. Her examples include privileges relating to education, careers, entertainment, child care, confrontations, physical appearance, and public life.

Turn in your highest-quality paper
Get a qualified writer to help you with
“ White Privilege: Unpacking the Invisible Backpack ”
Get high-quality paper
NEW! AI matching with writer

One of the examples that really made me think was the “flesh colored” Band-Aid example. Band-Aids are something everyone use and nude was the primary color which made me feel “they” considered normal. I thought nothing of why it didn’t blend into my skin tone perfectly when I was a child. It’s such a small thing but the way the world generalizes can be hurtful. She also provides a distinction between earned power and conferred privilege.

Gender refers to the socially constructed roles, behavior, and activities that the society considers appropriate for men and women. The roles and behaviors give rise to gender inequalities. For instance, the ideology that men are more interested in performing physically tough activities while women perform tasks like raising children, cooking, embroidery and so on. There are a number of people who are aware of this and some who are not. Race is a social construction that has real consequences and effects. It categorizes people based on physical characteristics and shapes the way we see ourselves and others. .Some of the statements McIntosh brought my attention to and made me think about the way that society treats others in comparison to the way white people are treated.

Even though society has come a long ways, it still has a longer way to go. There are so many things minorities will never have the opportunity to experience or understand because they aren’t white. It doesn’t matter what we do, how hard we work, how much money we have, who’s ass we kiss, we’ll never experience white privileges. White people are not stereotyped like other races are. They are also not looked down upon like other races. The list of Daily effects of White privilege that McIntosh describe are perfect examples. Here are a few of her points: 5. I can go shopping alone most of the time, pretty well assured that I will not be followed or harassed. 19. I can speak in public to a powerful male group without putting my race on trial. 21. I am never asked to speak for all the people of my racial group. These are just a few. Despite the fact that this essay was written in 1988, so a lot of things due to changes in society but not much. No matter how one may try to analyze a situation, white people are privileged bottom line. Some or even more privileged than others by way of money or reputation and other are privileged just by skin alone.

After reading this article, I really started to think. Staying in the South, people of color feel and understand racism versus someone who’s from Northern America. Everyday someone experience racism in some type of way regardless of their skin color. All of the privileges Peggy mentioned still exist today it’s just not as bold now like it used to be back in the day. Stereotypes are also something that has not disappeared. Before someone actually gets to know you, judgments have already been made based on physical appearances. Both blacks and whites use stereotypes against each other.

The list Peggy provided in her article are all the major things some people have to encounter with it comes down to race. I think that she hit the nail on the head and expressed more, the fact that this powerful piece was coming from a white person made me feel that there’s still hope. Progression is key and this is one step closer to world peace. 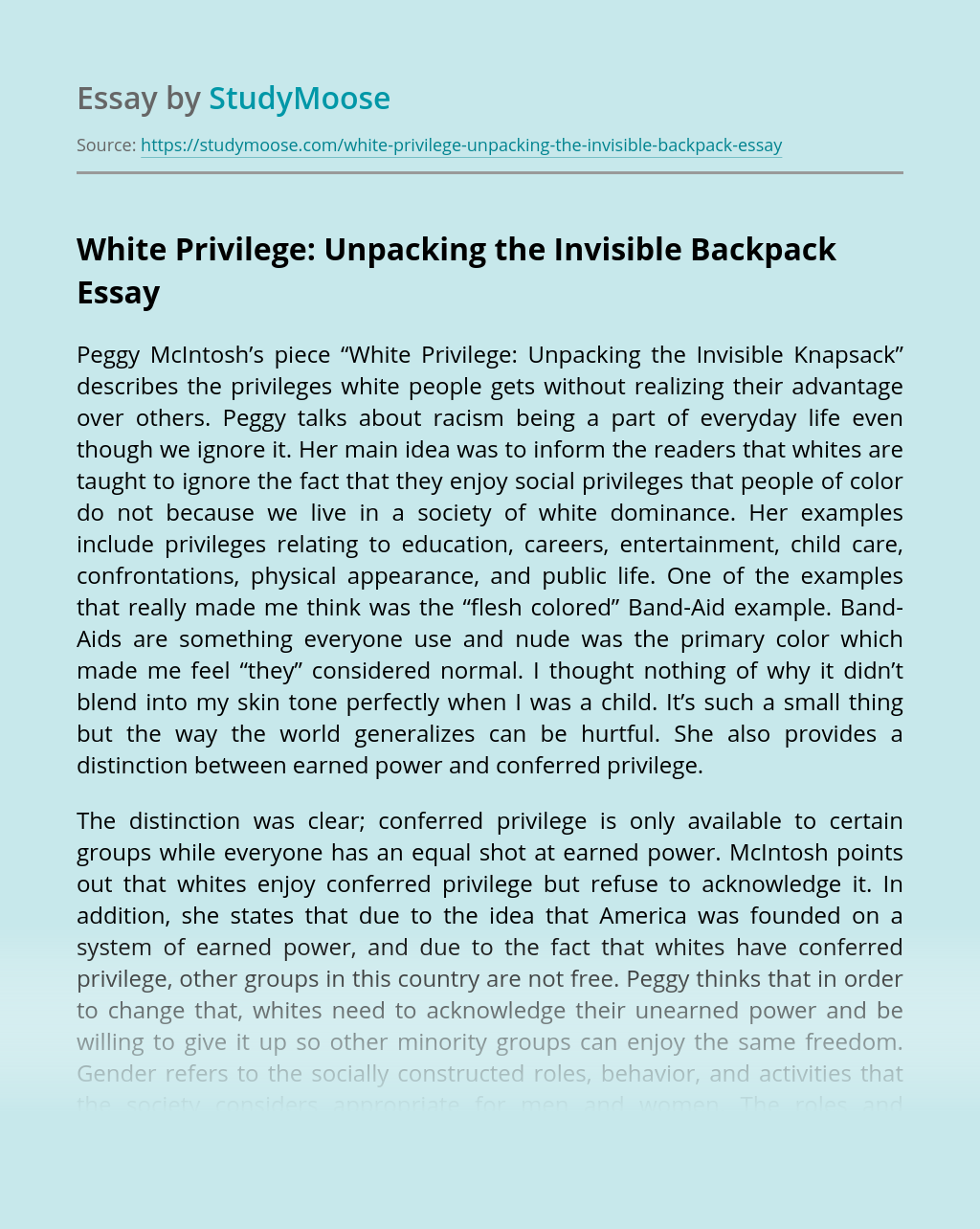 Turn in your highest-quality paper
Get a qualified writer to help you with
“ White Privilege: Unpacking the Invisible Backpack ”
Get high-quality paper
Helping students since 2015
Stay Safe, Stay Original