Is NAFTA good or bad? What are the advantages of NAFTA? The North American Free Trade Agreement (NAFTA) is a very significant part of international trading in North America. NAFTA was built upon a prior 1989 trade agreement between the U.S. and Canada that was responsible for tariff reductions between the nations. There were concerns of U.S. jobs being lost in the transfer of factories to foreign nations, where U.S. companies could take advantage of cheap labor and the lack of workers’ rights.

Turn in your highest-quality paper
Get a qualified writer to help you with
“ NAFTA Pros and Cons ”
Get high-quality paper
NEW! AI matching with writer

It was specifically designed to improve trading conditions between the North American countries. The treaty was put into effect January 1, 1994 and eliminated tariffs on many internationals goods. It would phase out other tariffs over a two decade period (Mayer 15). The agreement called for immediate removal of one half of U.S. exports to Mexico.

Along with NAFTA, the North American Agreement on Environmental Cooperation (NAAEC) was formed to prevent environmental destruction and to enforce the laws by which businesses are held.

The Commission for Environmental Cooperation (CEC) was also established under this agreement to address regional environmental concerns and help prevent potential trade and environmental conflicts. It also promotes an effective enforcement of environmental laws (Mayer 33). In addition to the NAFTA treaty, supplemental agreements were signed to address the issues of international labor rights

NAFTA was created to amplify and promote commerce among North American countries. Elimination of tariffs would increase exports and create a greater, more stable and much more efficient North American economy.

NAFTA linked a market of 365 million consumers in three countries, establishing the second largest free-trade zone in the world (Mayer 34). The main goal of NAFTA is to develop beneficial financial standards for all of North America though the regulation and improvement of environmental laws, investment opportunities, intellectual property rights (copyrights, software, patents), labor rights and working conditions, and overall economies of Canada, Mexico, and the U.S. (North American Free Trade Agreement).

NAFTA has been able to accomplish wonderful deeds for economies of Canada, Mexico, and the U.S. Trade between these countries has increased greatly and all have experienced a spectacular growth. It makes sense that North American countries would thrive as a free trading continent, both economically and politically. “A world of free trade is far more likely to be prosperous (and peaceful) than a world of tariffs and borders” (Hufbauer 31). NAFTA has created great economic increases with its participating countries and also brought the nations closer together.

NAFTA has played a huge helping hand with the Mexican economy. Because of NAFTA and excellent trading relations with the U.S., Mexico’s Gross Domestic Product has risen 5.5 percent per year for the last five years. When Mexico experienced the peso crisis, it rebounded quickly, from an $18.5 billion deficit in 1994 to a $7.1 billion surplus in 1995. The unemployment rate is down in Mexico as well as in the U.S. Mexico’s urban unemployment rate is less than four percent, after having risen from six percent in 1992 to 8.5 percent in 1995. Manufacturing, construction, transportation, and communications through NAFTA connections have been leading Mexico through its tremendous success.

Mexico’s exports however, are the greatest factor in this booming period. In fact, it is estimated that the year 2001’s real exports will be more than three times as large as when the NAFTA was signed (Orme 53). When Mexico is successful, jobs are created, and the economy is stable, there is much less of a desire for Mexicans to come illegally to the U.S. There are many opportunities in Mexico since NAFTA has influenced the market and that certainly cuts down illegal immigration. Mexico’s prosperity should be a concern of all Americans. It makes for better investments and opportunities within Mexico for its people.

Due to NAFTA the U.S. has seen rises in exports and production. The U.S. exports for 1996 were at $190 billion. U.S. exports to Mexico and Canada were greater in comparison to any other part of the world. An estimated 18 million new jobs were created during the first five years after NAFTA was activated and the total trade in North America increased from $293 billion to $420 billion in NAFTA’s first three years. NAFTA’s lowered tariffs also resulted in a 37 percent increase of U.S. exports to Mexico (Orme 62).

It is apparent that NAFTA has been very successful in building the economy of North American countries. GDP and employment are both accelerating and the relations between countries are as good as ever. NAFTA has continued to open the U.S.-Mexico border to increase commerce, creating very efficient international trading. As a result of NAFTA, Canada, Mexico, and the United States are all more powerful growing nations.

NAFTA is still widely opposed. Since its beginnings, NAFTA has had difficulties gaining full support from everyone; even in 1993, when it passed only by a narrow margin. The Global Exchange argues that working families suffer as a result of NAFTA. Nearly 400,000 U.S. jobs have been lost, and the workers’ new jobs on average only pay 77 percent of the earlier wages. One million more Mexicans dropped from the middle class into poverty.

Also, the environment suffers as a result of NAFTA. The increased pollution and disposal of chemical wastes has increased the rates of Hepatitis and birth defects along the U.S.-Mexico border. NAFTA has not been enforcing environmental laws as necessary (Orme 63).

Several Mexican trucks inside U.S. borders have spilled hazardous materials and have posed great danger. The issue with NAFTA is the safety standards that other nations’ trucks hold. The toxins create serious threats to society’s water supplies. Because 75 percent of U.S. trade with Mexico is delivered by trucks, it is very important that they can be trusted to be more than a rolling time bomb (Orme 68). Even if trucks from Mexico and Canada are able to freely enter the U.S. for commerce, there still must be some safety precautions. Driving faulty trucks back and forth across the border should not be a part of the free trade; it should be dealt with.

As for NAFTA Pros and Cons – it has been both successful and unsuccessful. It has indeed succeeded in accelerating international trade in North America and turning tremendous output from each of the three nations. Commerce has exceeded all past years, and has continued to increase since NAFTA was signed and drafted. Since NAFTA’s commencement, the U.S. wanted to get to full-scale trading with Mexico. Indeed it has succeeded in doing so also. The United States and Mexico are very close and share $100 billion in trading each year. NAFTA has played an incredible role in bringing North America together.

The major argument for NAFTA was that it was the best thing the U.S. could do to raise Mexico’s change at becoming a well-developed democratic and prosperous country (Orme 71). The U.S. had a strong interest in helping Mexican progress and could increase trade through tariff reductions. Mexico is the second largest consumer of U.S. goods and services; therefore there is a very strong U.S. economic interest in Mexico. If the motivation for NAFTA is purely financial, then it has been very successful.

I believe NAFTA has been a success for the economies of Canada, Mexico and the U.S. The truth can be told by sheer statistics. Still, I do not believe that NAFTA is careful enough, and should consider what the agreement has done for the working middle class families. Also, the environment is a huge concern. If NAFTA does not inspect the trucks allowed passing between countries, or cannot enforce anti-pollution laws, then perhaps it is not the best idea.

NAFTA should be sure not to allow businesses to lay off American workers to hire cheap Mexican labor. Working populace keeps countries alive and prosperous. It is unethical business practice and NAFTA could serve a vital role in the economic development without taking extreme advantage of laws. I think NAFTA is a great idea and the rise in the GDP shows that it has been successful. Still, the money gained from free trade does not outweigh the environment, safety, and workers’ rights. 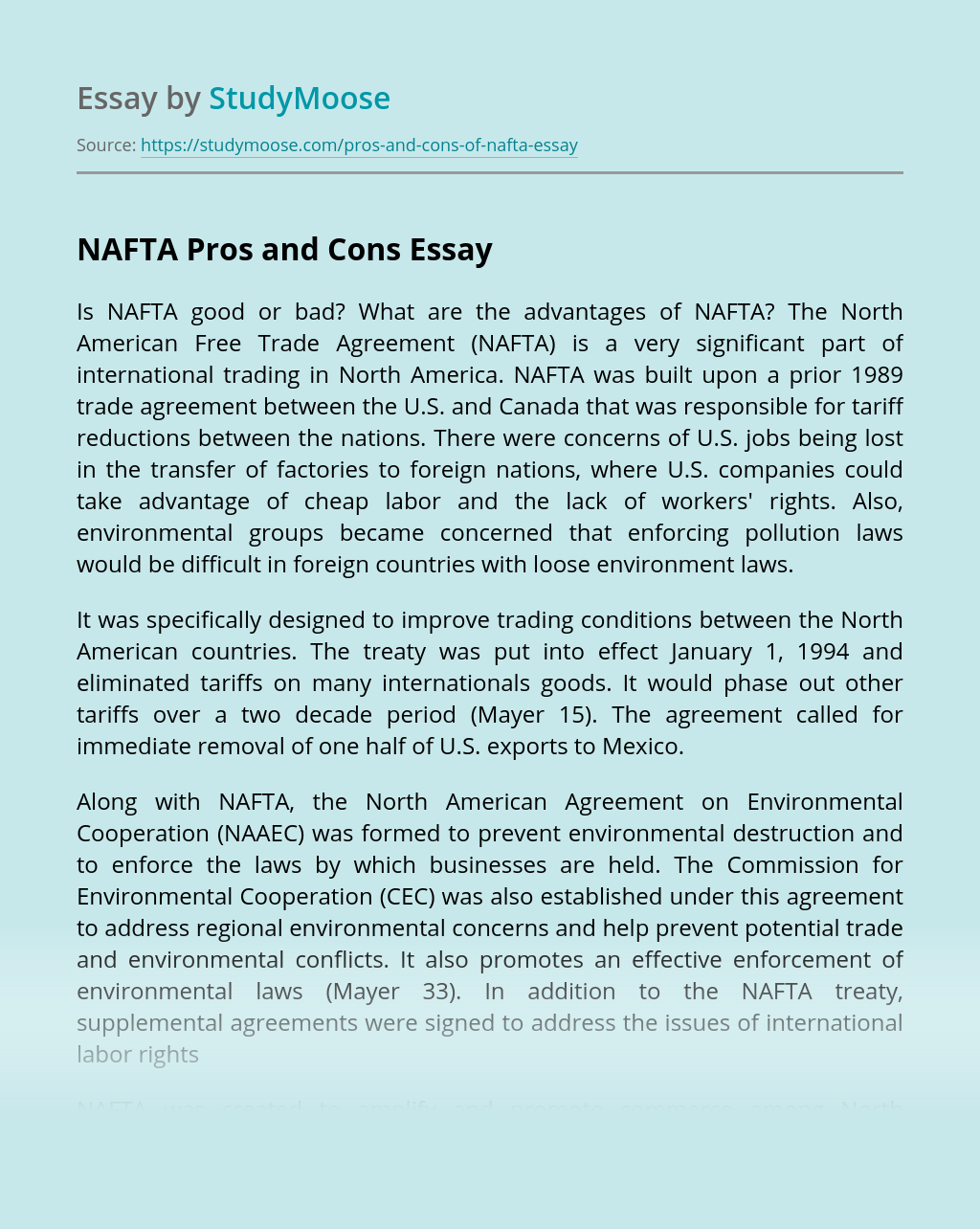 Turn in your highest-quality paper
Get a qualified writer to help you with
“ NAFTA Pros and Cons ”
Get high-quality paper
Helping students since 2015
Stay Safe, Stay Original