When trying to comprehend poetry in terms of what meaning it bears, it is vital to take into account the context in which it was created. The reason is that the lines of a poem may appear to be abstract or ambiguous for the reader in case he or she is not familiar with what an author can be referring to. Eventually, poetry can be interpreted in different ways with a dependence on how deep the insight that the reader has is.

Don't use plagiarized sources. Get your custom essay on
“ When trying to comprehend poetry in terms of what meaning it bears ”
Get custom paper
NEW! smart matching with writer

This allows for seeing similarities and differences in the poetry of various authors and their approaches, such as Moore’s ‘Reticence and Volubility’ and Armantrout’s ‘Poem’ (‘Attention Wanes’) in how they confront traditions related to gender that exist both in literature and the society.

To start with, one should emphasize the fact that the latter poem was written almost a century after the first one. This makes it inevitable to take into account the contexts in which they were created.

In fact, they can help to understand both the differences and similarities that the two works have, which implies the view and use of traditions, the form of each poem, and the manner of expression. Thus, with a century apart from each other, the two poems appear to be quite similar to each other concerning their structure and powerful voice that each of them expresses. At the same time, they are rather different in the topics they seem to cover and the openness of the poets in their works.

Considering Moore’s ‘Reticence and Volubility’ in details, it is interesting to address the fact that she is direct in how she confronts traditions. Living in the course of the beginning of the 20th century, the poet is brave enough to address the issue of ethics in relation to mortality. Moore starts her poem with a line “When I am dead,” which immediately signals for her intention to address the topic of death (Moore 1). In fact, Moore refers to Dante to emphasize the importance and complexity of this matter and remind the reader that it is ever-lasting: “And this Dante, / And know that he was right” (4-5). In other words, her mentioning of Dante and reference to his delightful reaction signals for the fact that the issue of ethics was as meaningful at the time of his life as it is today. In addition, she confronts the traditional view of men being those that think of complex and indefinite things and shows that a woman can do the same.

Then, Moore proceeds to a more day-to-day view of mortality and writes about a student, as opposed to a wizard in the first part of the poem, being concerned with his death: “‘When I am dead,’ / The student said, / ‘I shall have grown so tolerant'” (9-11). These lines show the contrast of how mortality has become discussed more seriously (“I’ll find I can’t / Laugh at your sorry plight”) as opposed to how it was viewed earlier (“And he’ll delight / in my remorse, / Of course.”) (Moore 12-13; 6-8). Thus, the poet reflects on the matter of how ethical and moral it is to react to one’s death with a particular feeling, including those positive and negative ones. By referring to different figures in the history and those of various backgrounds, Moore compares the traditions existing over centuries and challenges the existing views. Interestingly, she contrasts the views that were considered right at the time of their existence, which contributes to the poet’s confusion and inability to find a particular answer to her own question.

By contrast, Armantrout, in her “Poem,” addresses a completely different topic. Thus, it seems that the poet focuses on expressing a relationship between two people, one of whom tries to be “indifferent” yet continues to wander in dreams of the other one (Armantrout 10). The matter of tradition and how the poet confronts any is to be viewed from a different perspective. In particular, the author appears to write about how one has feelings for a person from the perspective of herself, a woman. She does not make the poem romantic or aims at expressing the strong feelings she may be having. Instead, she provides a hint to the reader about the connection that exists between “I” and “you” through the presence of the person in a dream and her attempt to look indifferent and “pretending not / to recognize you” (Armantrout 11-12). Such a view of the feelings of a woman appears to challenge the traditional approach to express female feelings in literature and does so differently and unusually. This manifests how Armantrout confronts the traditions related to genders.

All things considered, it is reasonable to note that both Moore’s ‘Reticence and Volubility’ and Armantrout’s ‘Poem’ (‘Attention Wanes’) appear to confront certain traditions that exist both in literature and the society in relation to gender. The two poets dedicate their poems to different topics yet manage to address the same message of how men and women are viewed differently in particular contexts. Although the two poems were written a century apart from each other, they appear to reflect the same concerns that exist in the society. Thus, Moore and Armantrout focus on confronting the traditional view of women and their attitudes towards particular topics accepted in society.

When trying to comprehend poetry in terms of what meaning it bears. (2019, Dec 03). Retrieved from https://studymoose.com/when-trying-to-comprehend-poetry-in-terms-of-what-meaning-it-bears-example-essay 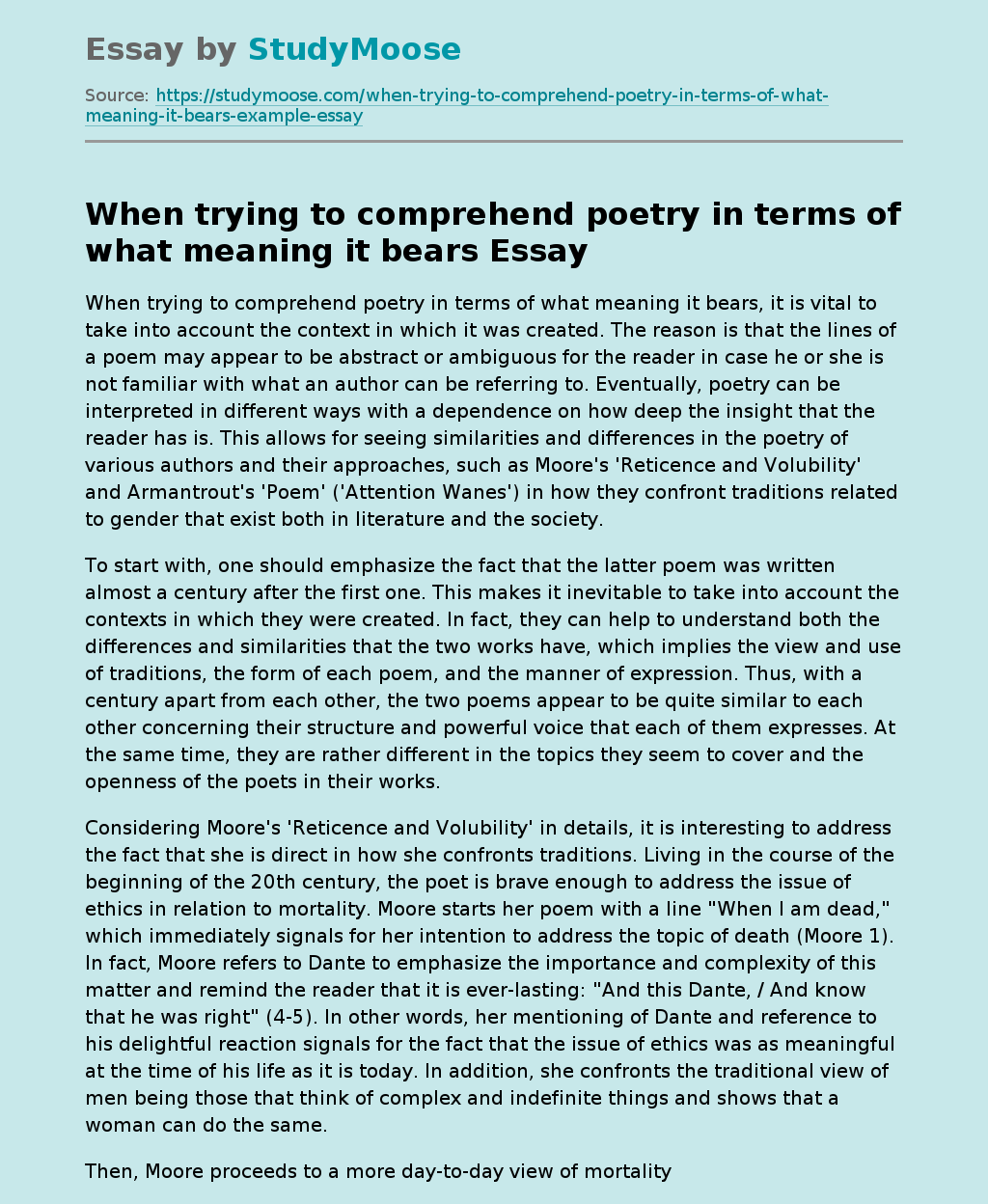