What you eat is your business

It seems that obesity will always be a problem with no solution. For once it would be merely impossible to find a solution that everyone likes or even one that the majority will support. There are different points of view in which someone could try to figure something out to at least help with the matter of obesity. ABC News is trying to tackle the problem and inform people on obesity by having a summit with Time magazine and discuss on various ways that would lower obesity in this country.

Don't use plagiarized sources.
Get Your Custom Essay on What you eat is your business Just from $13,9/Page

Radley Balko mainly discusses the government point of view in his essay “What You Eat Is Your Business.” I agree with Balko’s essay since government needs to visualize the situation from different directions.

Balko says that government can make policies that would limit some main causes of obesity, but he says that this is a wrong approach to the matter. He explains that many politicians support anti-obesity measures, like banning snacks and soda from schools.

He goes on to say that instead of controlling what Americans eat; the government should be finding a way to make citizens responsible for their choices and actions. He believes that changing the way health care works would make citizens more responsible of their own health and choices.

Balko states the issues with how the health care plan works and he suggests various ways of fixing it or at least make it better. I do agree with some of his statements or ideas. The majority of people these days know what they are eating but really doesn’t care because it’s their own body, and if they don’t care why would anyone should else care.

That’s where the problem starts because as Balko clearly states, “And if the government is paying for my anti-cholesterol medication, what incentive is there for me to put down the cheeseburger?”(p.397) I strongly agree with the plan Balko mentioned in his essay regarding insurance companies to reward healthy lifestyles because that would cause people to think twice before choosing. The last major point is that people would change their ways of living and choices if they were the ones paying for their own bills instead of someone else paying it.

Radley Balko points out some issues that are causing obesity but goes on to say that government is approaching the problems the wrong way. It is true that government policies are meant to reduce obesity in our society but just restricting or manipulating what we eat won’t change how people live. The government and the people itself should think of a way to make ourselves responsible for our own choices.

Works Cited
Balko, Radley. “What You Eat Is Your Business” They Say/I Say with Readings: The Moves That Matter in Academic Writing. Ed. Gerald Graff, Cathy Birkenstein, and Russel Durst. 2nd ed. 395-398.

What you eat is your business. (2016, May 27). Retrieved from https://studymoose.com/what-you-eat-is-your-business-essay 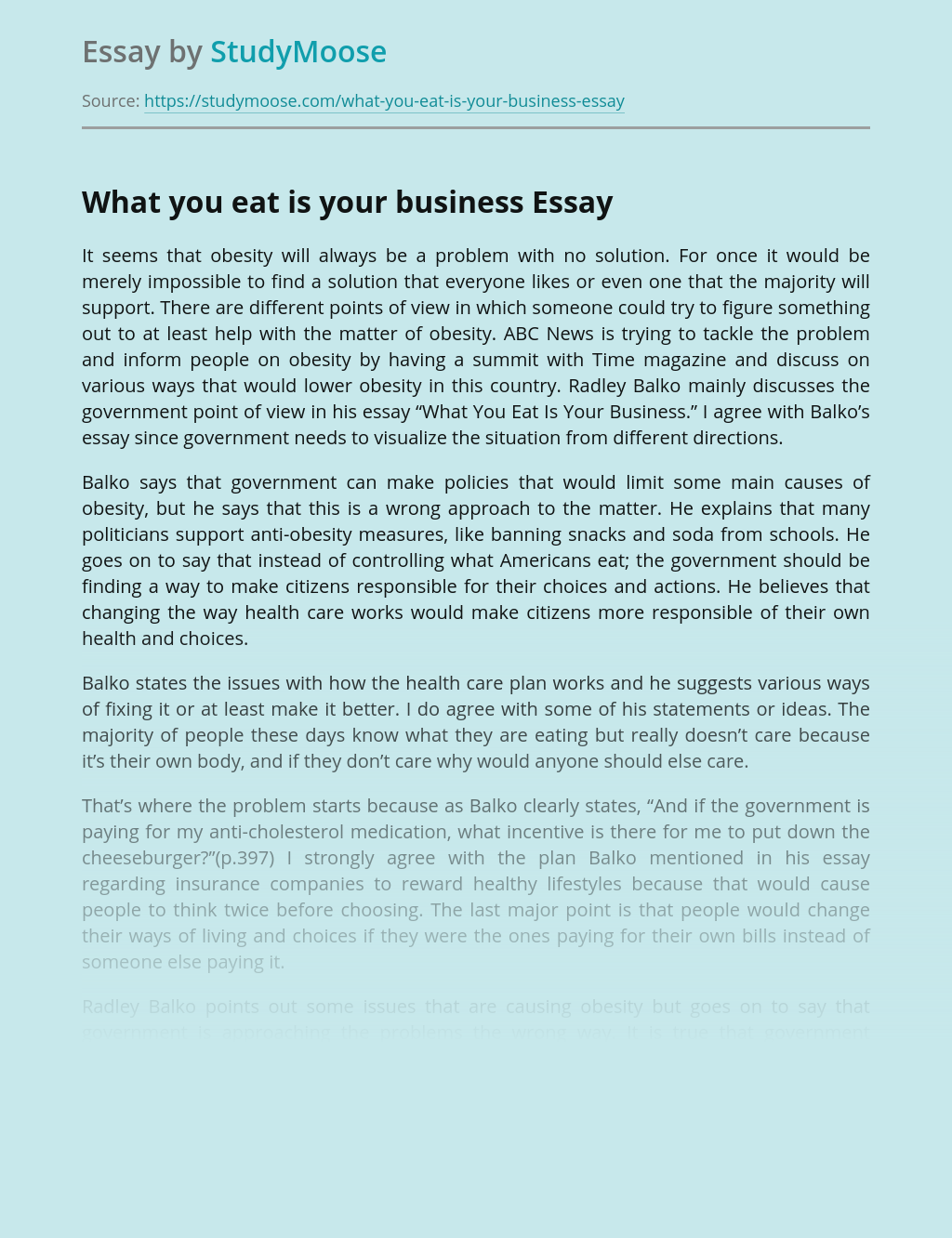 Rate this post Business, society and government are placed in different situations depending on what the conflict may be. According to the case “Dickinson’s needle sticks”, all three different sectors were placed in a different position where society was seen to have no voice or empowerment. The society in this case were the nurses, patients...

Rate this post From the essay ‘What You Eat is Your Business’ by Radley Balko, he shows a strong opinion of what should be public knowledge and what should stay private. His determination on obesity not being public health makes people rethink what obesity is, the government’s part in it, and how to go about...

Rate this post 1.0 Introduction/ BackgroundManage Your Health, Inc. (MYH) is a worldwide company that supplies a range of healthcare services around the world. MYH has more than 20,000 full-time staff members and more than 5,000 part-time workers. MYH recently upgraded its tactical plan, and crucial objectives include reducing internal expenses, increasing cross-selling of products,...

Rate this post Freedom of Information Act 1982 is entirely in the interest of public who can have access to various documents of government of Victoria and its public agencies for verification or for any other useful purpose.  The sole objective of FOI Act is to bring awareness among public whether the functioning and operations...

Rate this post In this paper I will discuss how Planned Parenthood has improve the lives of many women by providing a safety net for women’s health, being economically friendly, and promoting a decrease in the social stigma surrounding abortion. Safety Many women are victims of cohesion or abuse, maybe they feel pressure from their...

Rate this post Subsequent to a health care organization acquiring a new information system, is the system implementation process, the third of four stages in the systems development lifecycle. A significant amount of support and dedication is needed from senior executives and should take precedence within the organization. Adequate resources should be available to all...

Rate this post Just as technology changes every year so does the way technology is implemented in the health care filed. Technology has greatly benefited health care in many ways from how fast a patient can be seen by a physician to how fast their medication can be in their hands ready for them to...