What Memorial Day Means to Me

Memorial Day is when we honor soldiers who fought to make the world a better place. The meaning is to remember what they have done for us. Memorial Day means peace and thankfulness to me. It isn’t just about having a wonderful time, it means more than that. Without Memorial Day, we wouldn’t have freedom.

All of the soldiers who fought on the second to last day of May are honored on Memorial Day, May 30. We should all be thankful and show respect.

Don't use plagiarized sources.
Get Your Custom Essay on What Memorial Day Means to Me Just from $13,9/Page

It is a time where you can get together and share the sorrow of the deaths of the soldiers who have fought for us. A time for remembrance for those who have died in our nation’s service. Memorial Day was officially proclaimed on May 5, 1868 by General John Logan, national commander of the Grand Army of the Republic.

Memorial Day was originally called Decoration Day. Traditional observance of Memorial Day has diminished over the years. Many Americans nowadays have forgotten the meaning and traditions of Memorial Day.

At many cemeteries, the graves of the fallen are increasingly ignored, neglected. Many people no longer remember the proper flag etiquette for the day. While there are towns and cities that still hold Memorial Day parades, many have not held a parade for decades. Some people think the day is for honoring any and all dead, and not just those fallen in service to our country.

Since the late 50s’ on the Thursday before Memorial Day, the 1,200 soldiers of the 3d U.S. Infantry place small American flags at each of the more than 260,000 gravestones at Arlington National Cemetery. They then patrol 24 hours a day during the weekend to make sure each flag remains standing. In 1951, the Boy Scouts and Cub Scouts of St. Louis began placing flags on the 150,000 graves at Jefferson Barracks National Cemetery as an annual Good Turn, a practice that continues to this day. More recently, beginning on 1998, on the Saturday before the observed day for Memorial Day, the Boy Scouts and the Girl Scouts placed candles at each of approximately 15,300 gravesites of soldiers buried at Fredericksburg and Spotsylvania National Military Park on Marye’s Heights. And in 2004, Washington D.C. held its first Memorial Day parade in over 60 years!

To help re-educate and remind Americans the true meaning of Memorial Day, the “National Moment of Remembrance” resolution was passed on December 2000, which asks that at 3 p.m. local time, for all Americans “To voluntarily and informally observe in their own way a Moment of remembrance and respect, pausing from whatever they are doing for a moment of silence of listening to “Taps.” The Moment of Remembrance is a step in the right direction to returning the meaning back to the day. What is needed is a full return to the original day of observance. But what may be needed to return the solemn, and even sacred, spirit to Memorial Day is for a return to its traditional day of observance. On January 19, 1999 Senator Inouye introduced a bill, which proposes to restore the traditional day of observance of Memorial Day back to May 30 instead of “the last Monday in May”.

In conclusion, we have learned a lot about the history of Memorial Day and how it should be respected. All of us would like to thank them so greatly for all they have done to give us freedom and peace to sacrifice their life in change. So set aside one day out of the year for the nation to get together to remember, reflect and honor those who have given their all in service to their country.

What Memorial Day Means to Me. (2017, Jan 22). Retrieved from https://studymoose.com/what-memorial-day-means-to-me-essay 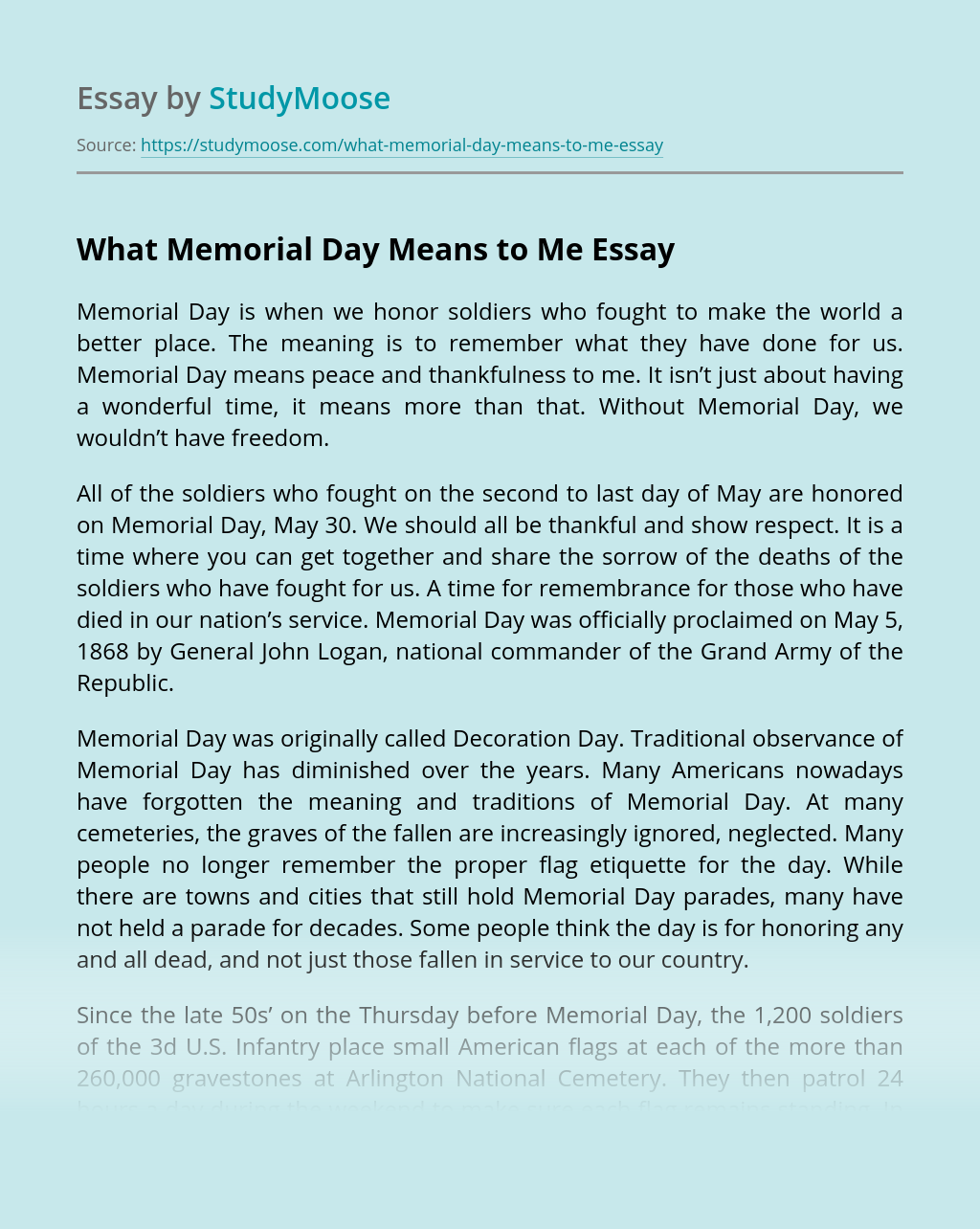 Get Essay
Analysis of "The Overachievers"

College application season can be the most demanding amount of time for any high school trainee. The combination of remorse for refraining from doing much better in school, doubt in your own possibilities of admission, and the worry of rejection is enough to recover cost the most steady students. Author Alexandra Robbins, however, realized that...

“We are so busy making a living that we forgot to make a life.” This statement is one of the best descriptions of Hong Kong dwellers. There are multitudinous researches have stated that Hong Kong is one of the fastest pace of living, one of the cities having the most expensive land price in the...

If you have a chance to choose a life, what will you choose? The rich but unhappy life or the ordinary life with lifelong happiness? Most people will choose the latter, because it is the essence of the life. The pursuit of individual happiness is being acknowledged as a world right. People often assume that...