Wells Fargo - A Great Bank That Made A Terrible Mistake

First, I thank Almighty God for guiding us in all the ways of life and fulfilling our intentions successfully. I owe my sincere gratitude to my supervising Professor Ms. Gudrun Tim, International University of applied sciences (IUBH), Bad Honnef, for her excellent guidance, generosity and whole-hearted support to make this paper a fruitful endeavor.

I take this opportunity to thank all the library staffs of our university for providing necessary materials useful for the preparation of this paper.

I wish to express sincere thanks to all my friends for their excellent help and co-operation.

Don't use plagiarized sources. Get your custom essay on
“ Wells Fargo – A Great Bank That Made A Terrible Mistake ”
Get custom paper
NEW! smart matching with writer

Wells Fargo was found in 1852 by Henry Wells and William Fargo in San Francisco, California. It is the world’s second-largest bank by market capitalization and the fourth massive bank in the U.S. by total assets. Since 2011 Wells Fargo bank workers had created millions of illegal savings and had been examining accounts on behalf of Wells Fargo customers without their permission. On 8th September 2016, an unexpected report was made public, a total of 5300 Wells Fargo employees were fired over for developing millions of illegal fake accounts, as the scope of the scandal was shocking for the whole nation.

Because of these illegal practices the company was fined to pay $185 million by Los Angeles city and the Federal banking regulators and a $100 million penalty by the Consumer Financial Protection Bureau (CFPB), to bring an end to the allegations.

The paper deals with different levels of questions such as the reasons for the scandal, governance issues in the bank etc.

The author will attempt to answer the above- given questions using his own personal judgment/views, and by citing other resources/sources as illustration and supporting evidence.

Wells Fargo is an American bank whose motto is “standing together with our customers and communities” ( The company is known as a provider of banking, loans, mortgages and credit card and reportedly places focus on selling additional services to customers. More than two years ago, the banking world was rocked by the news of Wells Fargo scandal. The federal government unveils, in September 2016 that new accounts and credit cards were opened by the bank without the approval of original customers name. Up to 3.5 million unethical accounts were created. The bank has since repaid the customers, battled with multiple enquiries and lawsuits, paid hundreds of millions in fines to regulators, released thousands of employees associated with the fraud. Even after its two years of pain, it is still working on making things precise.

Not only making more assets to the bank but, more basically, to boost sales figures so that employees involved could reach maximum quotas and qualify for getting attractive incentive bonuses. Without customers authorization, as many as 2 million Wells Fargo bank accounts and credit cards were opened by the bank employees of Wells Fargo.

The main people hurt in this scandal were the investors/shareholders, the consumers and the low-level employees of Wells Fargo.

Since the issue is the current one a lot of sources have been retrieved from secondary data’s.

How credibility can be restored among stakeholders?

Credibility refers to the organization’s history and how it develops reputational expectations over time. People’s trust in a company is basically lost after a scandal happens. Building a new one can be easy, but it’s a very different thing about repairing a reputation. Once enjoying an exceptional reputation in the banking industry, now it has been rocked by the years of trouble. To restore its credibility Wells Fargo must act big. So, what went wrong?

Lack of trust in a workforce mainly occurs due to a lack of transparency. So first and foremost, embrace transparency that is there should a culture of trust among employees and leaders. Each one should understand what his/her role is, the goal and purpose of the company. Thus, sustaining transparency can bring better relationship, alignment and engagement to the employees. Secondly reverse the culture, that is restore the good name and brand value by actions and not by negotiations or advertisement’s.

Credibility is found in being first, so always speed up the process before, other regulators do.

Governance issue in the bank

Various stakeholders involved and how they acted?

Two ways in which wells Fargo can recover from massive stakeholder insensitivity.

Even after replacing its chief executive and dismissing other members and leaders. The scope of problems keeps increasing and expanding. On April 20, 2018, it was announced that the Consumer Financial Protection Bureau and the Office of the Comptroller of the Currency will collectively fine Wells Fargo $1 billion for the mistreatment of its auto loans and mortgage consumers. (Investopedia)

The new chief executive Tim Sloan “We want to make sure we make that right for our customers if they had been affected.” Because wells Fargo is now on a “work in process” situation, researching on how its activities affected the customer’s credit scores. Wells Fargo customers may now take their business to other banks or credit unions.

On 20th September 2016 senator Elizabeth Warren in a severe manner stated Stumpf to resign from his position and return his profits/gains. Furthermore, Wells cleared Stumpf of $41 million worth of clawbacks in unvested stock awards.

From the most powerful female banker in the US (2015) to the villainous lady, the story of Carrie L. Tolstedt is said to have an unhappy ending. When she resigned she received a $124.6 million-dollar pay-out and forfeited $19 million of unvested stock awards in a clawback.

On April 10th, 2017, Wells Fargo clawed back $75 million from these two former executives for their respective roles in the fake account scandal.

Measures to the stock price development

The information is mainly retrieved from secondary sources made available through previous research articles, journals, and other reliable sources like the New York Times, The Economist, The Guardian etc. Various secondary statistics available has been used to determine the output of the research. Furthermore, Personal judgement is also used in reaching the findings of the study.

Cross-selling -selling a non-identical product or service to an existing customer. Cross selling is one of the main reasons for the downside of Wells Fargo scandal. It was an unrealistic target for the workers of Wells Fargo. Thus, the main motive of opening this ghost accounts was to:

The employees were put into high pressure that is, perform or get fired. The company was demanding its sales force to sell its 8 products (Mantra of Wells Fargo) “Eight is Great” to the customers. But this orders from the top officials were seen to be a troublesome for the bank employees as they were unable to meet the demanding quotas or targets of the bank or even satisfy the higher-level manager’s trust.

This led them to open new accounts in the name of Wells Fargo customers without their knowledge and approval. That is by transferring small amounts of money to the account to make it real and believable, with a hope that no one would take a notice. As a result, people were not satisfied with what they were witnessing and happening. Moreover, after building up years of trust, people lost their integrity towards Wells Fargo.

Customers and lawbreakers are demanding answers. There are challenges to overcome. The people’s trust in the banking system was damaged at a certain level. The values of the company were down and out altogether.

The fake account controversy has led the bank to remain in an uncertain condition as even, other shocking incidents or series of events keep on growing day by day. The bank portrays an image where the customers are mistreated badly. Thus, it can be said the scandal is responsible for undermining the shareholder’s values. Meanwhile, only time will tell the real impact on the bank and how it overcomes it.

One of the topmost priority of Wells Fargo is to rebuild its lost trust with customers, team members, shareholders, communities and regulators.

Wells Fargo - A Great Bank That Made A Terrible Mistake. (2019, Dec 19). Retrieved from https://studymoose.com/wells-fargo-a-great-bank-that-made-a-terrible-mistake-essay 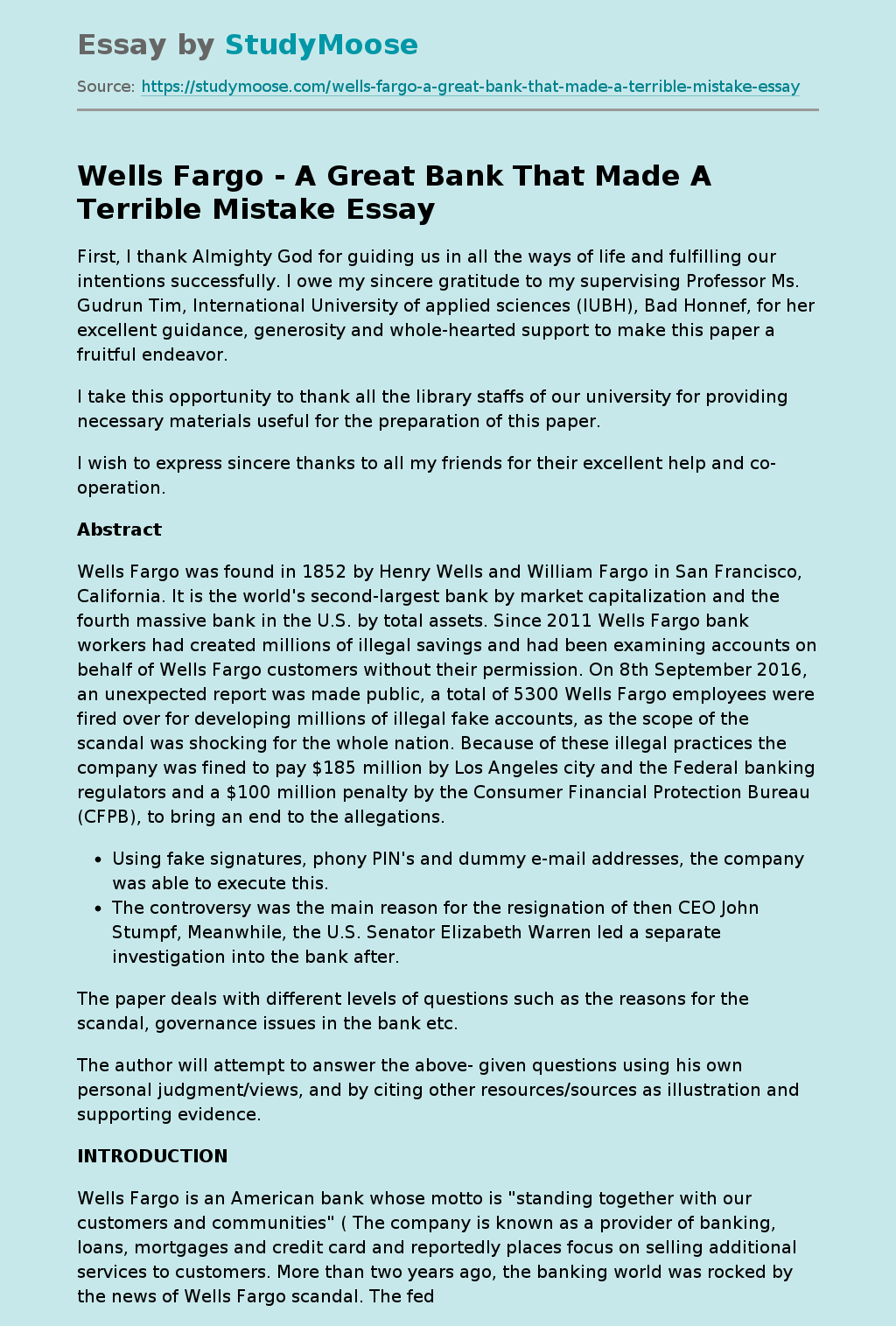