Ways of Knowing in Nursing Practice

A nurse on a medical/surgical floor is treating a 62 year old patient with an initial diagnosis of colitis. The patient has been in the inpatient setting for 11 days, which is far longer than the normal length of stay for this diagnosis. This patient also has a comorbidity of seizure disorder. He has not been compliant with daily ambulation orders, and acts largely helpless when asked to independently perform activities of daily living. Upon assessment at the beginning of the shift, the patient is alert and oriented.

He has no complaints of pain. His lungs sounds are clear but diminished in the bases. Breathing is even and regular at this time.

His oxygen saturation via pulse oximetry is 94% on room air. The patient has sequential compression devices on his bed, but they are not applied. When the patient is asked why they are not on, he states that they were annoying him so he took them off earlier in the day.

They are reapplied at this time. The patient is without further complaints. His evening medications are administered, including 30 mg of Phenobarbital, 100 mg of Dilantin, and 10 mg of Valium, which is his normal regimen of medications for his seizure disorder. Later in the shift, the certified nurse’s aide takes his routine vital signs. The aid reports an oxygen saturation of 76% on room air. The patient is easily aroused and oriented with no signs of over sedation. No cyanosis is noted at this time. The patient’s breathing pattern is shallow, and he states that is feels like he cannot catch his breath. The patient’s telemetry shows that he is in sinus tachycardia with a rate of 110 to 140. The patient is place on 2 liters of oxygen via nasal canula. After several minutes, the patient’s saturation is at 80%.

The oxygen level is titrated, and the patient achieves a saturation of 90% at 4.5 liter of oxygen. The nurse removes the sequential compression devices from the patient, assigns the aid to monitor the patient’s oxygen saturation and calls the physician for further orders. The stat D-Dimer ordered is positive, and the subsequent V-Q scan shows the presence of a pulmonary embolism. The patient is transferred to the Critical Care Unit for anticoagulation therapy and monitoring.

Ethical knowledge refers to the moral component of nursing. This way of knowing is manifested by the choices that nurses make, and judgment on which actions to take in any given situation (McGovern, Lapum, Clune, & Schindel-Martin, 2012). The nurse in this case, regardless of any possible personal feelings related to the patient’s non-compliance and perceived helplessness, did everything possible to ensure timely delivery of treatment for this patient to reduce the risk of death or permanent damage because it was the morally right thing to do.

Clinical knowledge is the way of knowing that comes from nursing experience. It is a combination of empirical knowledge, personal knowledge, intuition, and subjective knowing (McEwen & Wills, 2011). Clinical knowledge is what appears to guide most clinical decision-making skills (Lake, Moss, & Duke, 2009). In this case, the nurse’s clinical knowledge, gathered from what was learned in textbooks, previous experiences, and the “feel” of the situation, guided the response to this situation. The knowledge that the patient had been sedentary for 11 days combined with the lack of compliance with deep vein thrombosis prophylaxis put this patient at a high risk for a blood clot.

Shallow breathing and low oxygen saturations could have been caused by the relatively large doses of barbiturates and diazepam that the patient had been given, but the nurse was aware of the patient response to these medications on previous shifts, which did not result in over sedation. The nurse was also aware that the lack of a significant increase in oxygen saturations after administration of supplemental oxygen was also indicative of a possible pulmonary embolism, which led to the action of removing the sequential compression devices to prevent the mobilization of any further clots that may have been present.

Nurses use multiple ways of knowing on a daily basis without conscious thought of how they know what they know. The four basic patterns of knowledge combine almost seamlessly into everyday decision making in the clinical setting. By analyzing the actions and the sources of knowledge, nursing can encourage the use of different types of knowledge in practice, education, and research, as well as help to develop the knowledge base for nurses with less clinical experience and judgment (McEwen & Wills, 2011).

A nursing philosophy states the thoughts on what is believed to be true about the nature of the profession of nursing and provides a basis for nursing activities. Nursing philosophy encompasses beliefs about the epistemology, or nature of knowledge and thought, as well as the ontology, or the nature of what exists concerning nursing practice or human health practices (McEwen & Wills, 2011). It examines the relationship between the truths and ideals in nursing. Many nursing philosophies exist on the individual, facility, and group levels, and philosophies have been proposed on the national and discipline level, but nursing, as a discipline or profession, has no single nursing philosophy that overrides all others (Meehan, 2012). This means that there is no universal basis for all nursing practice, processes, or research. This can be considered a part of the reason for division about nursing’s status as a profession (Meehan, 2012).

Nursing science is considered to be among the human sciences, as well as an applied science (Logan & Angel, 2011). It is not a hard science, characterized by sole empirical and quantitative experimentation. It is not a soft science, focusing on the subjective experiences of individuals, groups, or cultures. A human science combines the objective with the subjective, the biological aspects with the psychological aspects of human response, while considering cultural differentiation and the role of the nurse in creating positive responses (Logan & Angel, 2011). Nursing science is responsible for the generation of new knowledge in the domain of human responses to health and illness. The purpose of nursing science is to understand, explain, and represent the nature of nursing and to use this information for the benefit of all (McEwen & Wills, 2011).

Philosophy of Science in Nursing

While nursing philosophy, nursing science, and philosophy of science in nursing are three separate concepts, they are interrelated. In order to understand one concept, there must be an understanding of the others. In order for nursing to continue to grow as a discipline and a profession, the philosophy of nursing needs to be better defined, and continued growth is needed in the science of nursing.

Nursing as a Profession

A long-standing debate exists regarding the status of nursing as a profession versus an occupation. Nursing is an occupation, since all professions are in fact occupations, but not all occupations are professions. A profession is defined as an occupation that meets specified criteria beyond that of an occupation (Creasia & Friberg, 2011). A profession has seven characteristics. These include a defined knowledge base or theoretical framework for practice, a required education, altruistic service, a defined code of ethics, socialization, autonomy, and self-regulation (McEwen & Wills, 2011). Nursing provides an altruistic service, a defined code of ethics, socialization, and self-regulation. While nursing embodies some of these characteristics, in order for nursing to be universally accepted as a profession, some areas, such as the knowledge base, education requirements, and autonomy, need to be better defined.

Nursing as a discipline does possess its own knowledge base that is derived from theoretical formulations and scientific research. Also included in the realm of nursing knowledge are personal experiences that contribute to clinical knowledge and expertise (Creasia & Friberg, 2011). One of the things that nursing is lacking is a defined philosophy or universal base for nursing practice, processes, or research. Nursing also lacks a defined theoretical framework, but instead relies on many, sometimes conflicting, frameworks for the basis of research and knowledge generation (Parker & Smith, 2010). This lack of cohesion is one of the arguments against nursing’s status as a profession. Nurses in advanced practice can help to advance the professional status of nursing by participating in research for knowledge generation and expansion of the nursing knowledge base, as well as working to develop a cohesive nursing philosophy (Sabatino, Stievano, Rocco, Kallio, Pietila, & Kangasniemi, 2014).

The varying education requirements for nursing are another area of contention regarding status as a profession. An argument against the acceptance of nursing as a profession is the lack of required university level training to achieve licensure. There are three different entry levels for a Registered Nurse, including diploma programs, Associates Degree programs, and Bachelors Degree programs. All three entry levels take the same test administered by the National Council Licensure Exam (NCLEX) that is developed by the Nation Council of State Boards of Nursing. Each state Board of Nursing sets the requirements for education programs and licensure within that state, leading to differences in education standards across the nation (Creasia & Friberg, 2011).

In order to advance nursing’s professional status, it has been proposed that new Registered Nurses should be required to be trained to the Bachelors Degree level before achieving licensure, although in 2011 only 40% of those applying to take the NCLEX were from Bachelor’s programs (McEwen, Pullis, White, & Krawtz, 2013) . While this would help promote the professionalism of the field, it is not deemed to be a feasible option at this time with ongoing nursing shortages, especially in underserved areas.

Autonomy is a key issue to the professionalism of nursing. Autonomy is the freedom to act within a specified scope of practice (Creasia & Friberg, 2011). The autonomy of nurses is limited by facilities and actions of nurses are simply carrying out the orders of a physician, even though the methods in which the orders are carried out are directed by nursing knowledge. For many, nursing is still viewed as a lower level of medical knowledge that is directed by the profession of medicine (McEwen & Wills, 2011).

In order for nursing to been viewed by all as a profession as opposed to an occupation, there needs to be cohesive action by all nurses to change its image. By investing in education and working to change the entry level of nurses to a university level education, nurses can gain more prestige. By investing in, and actively engaging in nursing research, the defined nursing knowledge base can grow. Showing competence in nursing judgment, and working with physicians as opposed to under physicians may help elevate the status of nursing to a profession in the eyes of the whole world, not just the nursing world.

Ways of Knowing in Nursing Practice. (2016, Jun 01). Retrieved from http://studymoose.com/ways-of-knowing-in-nursing-practice-essay 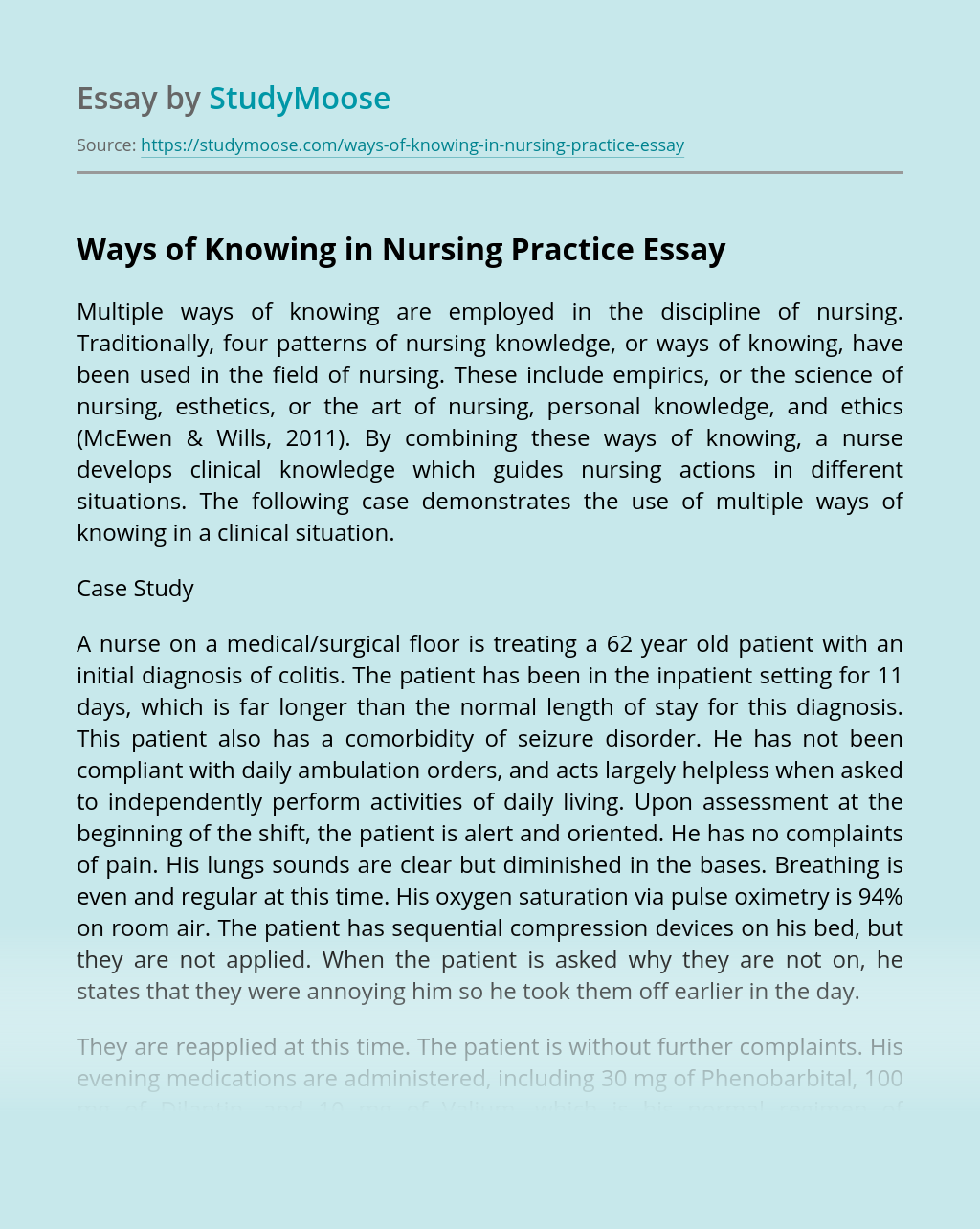 Don’t waste time
Get a verified writer to help you with Ways of Knowing in Nursing Practice
Hire verified writer
$35.80 for a 2-page paper
Stay Safe, Stay Original