Analysis of a Play The Shoe-Horn Sonata

Visual Techniques in The Shoe-Horn Sonata

On Air Sign: Bridie and Sheila sharing their experiences as POWs with Australia = A visual reminder of the intrusion into their privacy. Evacuation of Singapore on 13 Feb, 1942 alongside the Women and children boarding ships, clutching toys, waving goodbye. Women and children fleeing from the city that was about to be invaded by a conquering army. “It is hard to believe from their happy smiles that they are soon to be the victims of history’s worst – and least known – massacre” (p 30) = Reinforces the innocence and vulnerability of the women and children.

Don't use plagiarized sources. Get your custom essay on
“ Analysis of a Play The Shoe-Horn Sonata ”
Get custom paper
NEW! smart matching with writer

This comment foreshadows the terrible events in the play. It also hints at the great arrogance of the British Empire which blindly believed in its own superiority. “[the (British) ship] lay there like a wounded animal, spilling oil instead of blood.” (31) Sheila describes the sinking of her ship as she sees it from the water. = This simile compares the ship with an animal; the ship personifies the British Empire, wounded, bleeding and defeated by its enemy.

This technique demonstrates the aftermath of the British arrogance. “Sound: Young Sheila whimpering a line or two from Jerusalem – a very moving and stirring hymn about the greatness of England – God’s chosen Empire. “In juxtaposed against the “Slides of Singapore Harbour – filled with burning ships.” The use of directorial notes is stipulated to emphasise the total humiliation and defeat of the British Empire. The fall of Singapore represents the end of British domination in South East Asia: “we see hundreds of victorious Japanese soldiers, their arms raised in triumph … It is a most disturbing sight.

For this photo has captured the moment when the British Empire teetered and fell …” After this, Australians no longer trusted Britain to defend Australia. This is conveyed very effectively in the play. Misto juxtaposes projected images of the fall of Singapore with the sound of Sheila singing the famous British hymn Jerusalem. “These former rulers of the British Empire are now skin and bone and dressed in rags.” This shows the suffering and mistreatment of the prisoners – their starvation, poor accommodation filthiness and sickness. The music, It’s a … lovely day tomorrow, sung by Young Sheila, contrasts with the visual image, showing the mental suffering of the prisoners.

Analysis of a Play The Shoe-Horn Sonata. (2016, Apr 13). Retrieved from http://studymoose.com/visual-techniques-in-the-shoe-horn-sonata-essay 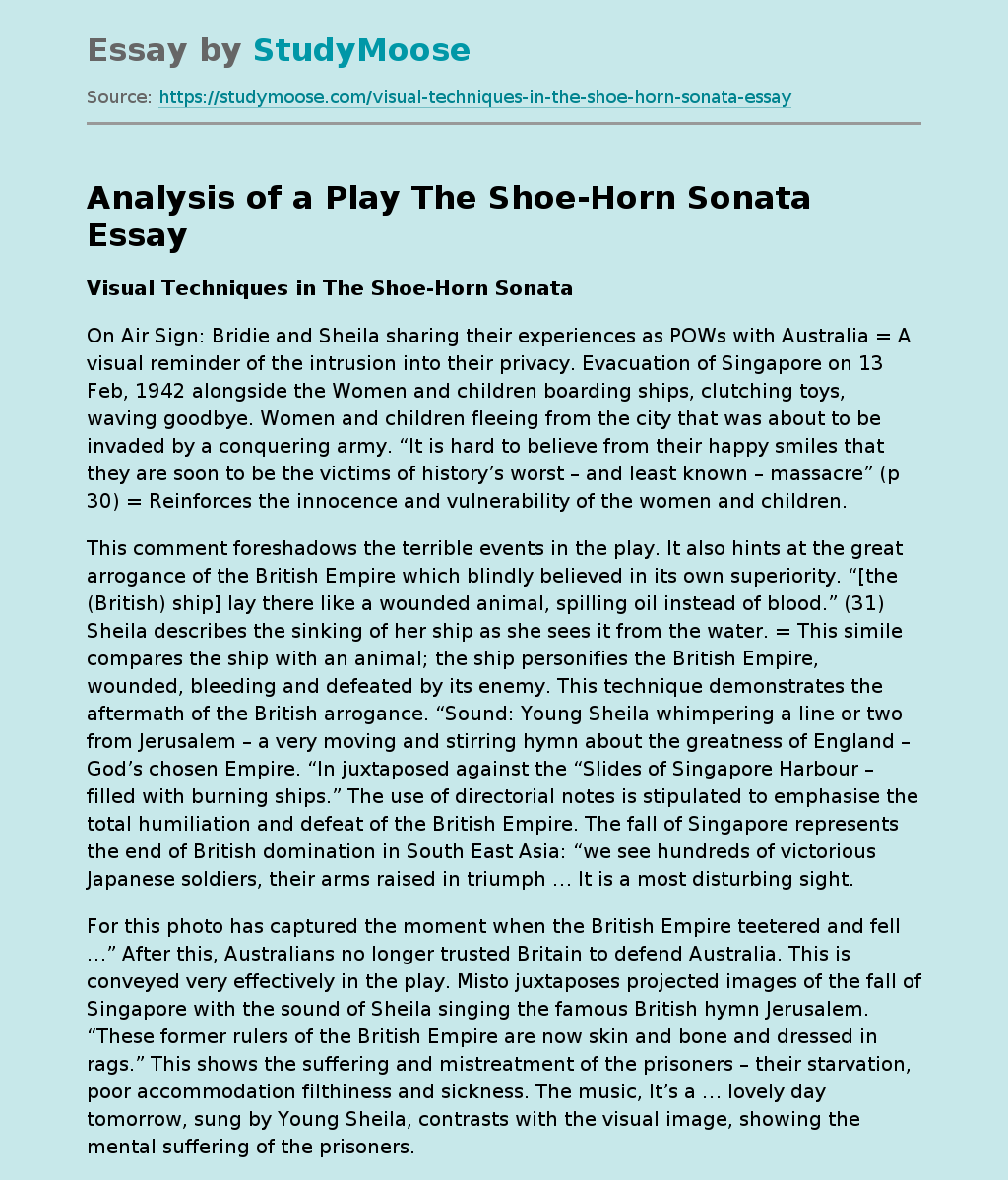