John Misto’s play “The Shoe-Horn Sonata” is a text that was written to acknowledge and honour the women who were once forgotten prisoners of war in World War 2. The play uses distinctively visual images and dialogue to create visual images of dehumanisation and the small idea of hope during this time. “Schindlers list” directed by Steven Spielberg also used the movie to acknowledge the names of the Jewish that had been forgotten. A range of techniques are used in both texts to help understand the visual aspect of the texts such as the plight of the protagonists in each text.

The Shoe-horn is a metaphor of both hope and dehumanisation. Birdie sees her beloved “shoe-horn” as a symbol of hope, whereas Sheila sees it as her fear and dehumanisation of the war. The Shoe-Horn is also a symbol of their friendship, “Just a gentle tap with my shoe-horn” says bride, as these too women are floating in the cold ocean, bride is trying to keep her new friend sheila awake, so she does not die, therefore this quote symbolises the start of a friendship and what is would have been like in the POW camp.

Act 1 Scene 3 – “Large Japanese flag, blood red rising sun is risen” this implements fear for the audience and displays a distinctively visual image of what the emotions and dehumanising aspects of what their time was like in the Japanese war camps. “We forgot the Japs- we forgot our hunger – our boils- barbed wire – everything” the repetition of “we forgot” emphasis the little hope that the women had in the camp – it also shows the distinctively visual aspect of how these women lived and the way they were treated.

Lists are used throughout the movie, as they are also a metaphor of dehumanisation and hope. They are also used to acknowledge the Jewish forgotten names, as they were dehumanised and were given numbers, instead of names. This distinctively visual aspect is reinforced throughout the movie. Isaac Sterin says “The list is life” as a Jewish man saying that signifies hope and the positiveness of Oscar Schindler which he experiences a lot of pain from seeing this girl and he changes through this experience which leads him to create the list. Colour images are used in the movie for selected scenes.

We see a girl in a red coat trying to run and hide from the “ghetto” that is being raided by German soldiers. She is a visual symbol of innocence and she is again used in the movie when her body is being dumped into a mass grave, signifying the amount of innocence’s that have been dehumanised and been dumped into this grave with no memorial of their deaths, which contrast to the idea of Bride and Sheila working on “grave-digging mostly” with their shoe-horn for the people in the POW camp that had died due to diseases gives the distinctively visual representation of the dehumanising aspects of war times.

The utilisation of dialogue creates strong visual images throughout the play. “Why didn’t you just give up and -?” this line is said to the women visually representing how dying was actually an option as the living conditions were dehumanising and horrid. “Fifty voices set us free” the use of personification represents the strong aspect of hope these woman had whilst performing and it helps to understand that their experience was hard but they made it through. “Sleeping with a Jap? I’d never had done that – not for anyone” bride says this line with all confidence in that her friend Shelia would never do it either, the truth is then told and we find out that Shelia has sold her body, instead of the shoe-horn to help save her sick friend. This experience Sheila went through helps understand the further aspect of dehumanisation that went on in the camps and that the shoe horn was not just a symbol of hope but also the dehumanisation of Shelia selling her body. “Darkness. Then we see a photograph of children in a Japanese prison camp. They are stick thin – obviously starving, dressed in rags. Filthy.” This visual image helps the audience to understand the full extent of the dehumanisation that these people endured in these Prisons of War camps.

Spielberg uses different lighting techniques throughout the whole movie. “War only brings out the bad in people, never the good, always’ the bad” this quote gives the audience a distinctive image of why the contrast of the lighting on Schindlers face is bright and fades to a dark shadow in the beginning of the movie. As the movie progresses the shade of dark slowly is taken over by the light, as he as an individual starts to respect his accountant Isaac Sterin which then changes the shade of his face in the end of the movie. The good is also represented in the scene where schindler hoses down the train carriages in a white suit – whilst surrounded by Nazi generals in dark coloured uniforms which distinctively shows the good within Oscar Schindler at this point in the movie. “Darkness” is the first word of the Shoe-horn sonata. It is used throughout the book to represent that the stories of these woman have been kept in the dark for a long time.

The contrast of using dark images such as “…their happy smiles that they are soon to be victims of history’s worst massacre” sets the distinctively visual image for the scene in which it will be very dark. The comparison between the two text show the strong distinctively visual images portray in both the shoe-horn sonata and schindlers list. Different techniques show the contrast between the two texts and explore the different aspects of both hope and dehumanisation during war times. The use of distinctively visual images in each text help audiences understand what life would be like in both a Prisoner of War Camp and a Concentration Camp. These texts also let us reflect on those whose stories are still untold from theses harsh times in history. 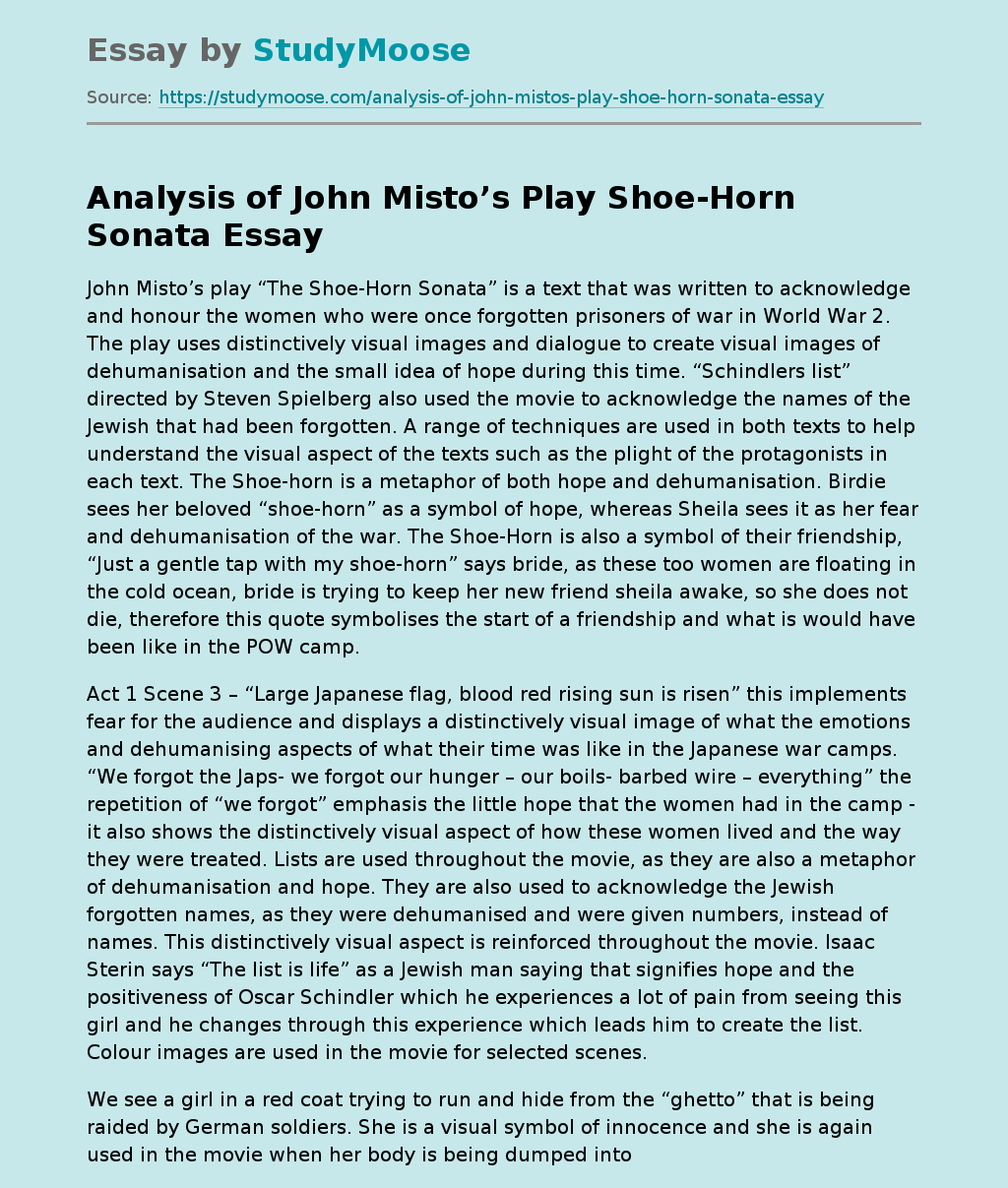