The poetry of Robert Frost was written in the early 1900s and have become a standard in American Poetry. Frost was a prolific author and poet who had the unique ability to effortlessly combined the rich and varied American landscape with modernized transcendental thinking. His poems continue to inspire poets, students, and casual readers. Many of his poems center around nature, his love for New England landscape, and the human experience.

These poems are usually set in the colorful New England landscape at the onset of fall and memorializes the journey of one man forced to decide, choose, ponder, or reflect.

Don't use plagiarized sources. Get your custom essay on
“ Universal Human Experience of Choice in Robert Frost’s Poetry ”
Get custom paper
NEW! smart matching with writer

He creates his point of view from his own personal experiences. After a close reading of his poems it is clear that Frost often asserted the same theme throughout his work.  This theme was that of human choice and utilization of free will. Frost, in his poetry, uses his own personal experiences to develop and support the theme that life is about making hard choices and committing to those choices.

In The Mending Wall, which appeared in North of Boston, Frost writes about neighbors which are forced to work together. While there is respect between the two men there is also a feeling of unrest. This is because the men differ on some fundamental life values which the poem explores (Cook 72). The poem centers around this growing unrest. One of the neighbors do the majority of the talking and is quite to point out that this is only his opinion and does not want to push his views on his neighbors (Doyle 9).

Frost believes that each man has the right to make their own mistakes and reap the consequences. This is one of the many common experiences which are explored in Frost’s poetry (Doyle 11).

The central image in the “Mending Wall” is the wall itself. As the wall decays, the narrator and his neighbor repair, which maintains their relationship. However, the wall is also used by Frost as an symbol. The wall symbolism the metaphoric wall which human build to keep themselves safe and other out. Frost asserts that “There were it is we do not need the wall” (23) implying that while emotional wall exists, they are not needed. He believes that “something there is that doesn’t love a wall” (1). Narrator cleverly explores that idea that if people were truthful with themselves they would have to confess they do not like the wall which separates one life from another (Greenberg 1). Perhaps this is the reason for the falling stones and the constant decay of the wall over time.

Frost has the unique ability to bring together metaphysical thought and the beautiful New England landscape in rhyming text.  There are several minor images within the poem which add to the mood and tone of the poem. The setting of the poem is springtime and can be seen in “frozen ground swell” (2), “spring mending time” (11), “in the sun” (3), and “spring is the mischief in me” (28). Spring is the time when life begins anew and there is great hope for the future.

What matters is that the poem makes clear the fact that sometimes serious questions arise, questions that neighbors must decide. “In this poem, Frost (or the man he has made himself into in the poem) shows his neighborliness by becoming the passive one, the listener. The poem shows that being a good neighbor demands many things” (Cady 71). The concept of being a good neighbor is American ideal and an universal experience. This poem is really a dialogue between Robert Frost and his uncle. His uncle was his hardest critic and pressured Frost to do succeed at school. When Frost attempted college several times and failed, his uncle talked him into running a farm for several years (Cady 55). Frost, while he respected his uncle, wanted him to mind his own business. He wishes that his uncle would be hopeful of the future and not try to dominate his present. Their relationship is reflected in the poem (Doyle 34).

Similarly, in Nothing Gold Can Stay, he explores another common experience — that nothing good lasts forever.  This is a reflection of his own experiences with loss and death. Robert Frost was born on March 26, 1874, in San Francisco, where his father, of “firm New Hampshire stock, edited a newspaper. The paper was Democratic and Robert’s full name is Robert Lee Frost, two facts which are usually taken to indicate the elder Frost’s attitude to then-Republican New England. When Robert was eleven, his father died, and he and his schoolteacher mother crossed country and settled with relatives in Massachusetts” (Cook 60).

The poem opens with images offering the freshness of spring; but as in a dream, when one reaches for the object it is gone, “Nature’s first green is gold” (ln 1). Frost continues, “Her hardest hue to hold” (ln 2), this first green is of a delicate and transitory quality that is already disappearing even as it is being born. By line four the pattern is set. These desirable things are given, but not to keep. The process goes on as ” . . . leaf subsides to leaf” (ln 5). Every human goes through the loss of innocence and learns the archetype of golden youthfulness and innocence was soon lost before the onslaught of the properties of the tree of knowledge (Doyle 81).

The idea that everyone must make hard decisions in life is also a common human experience.  This universal experience is exemplified in Stopping by Woods on a Snowy Evening.  “In 1897 he enrolled at Harvard, hoping to prepare for a career in college teaching, but he left after two years without a degree. Frost was then twenty-five” (Greenberg 23).  Disappointed with Frost’s erratic progress, his grandfather presented him with a farm in Derry, New Hampshire, on the condition that he retain it for ten years (Cady 41).

Even though Frost wanted to go off and write poetry, he had made a promise to his uncle. Even though he was tempted to quit he fulfilled his promise. Frost recounts his temptation in this poem. Frost observes “The woods are lovely, dark and deep / But I have promises to keep” (ln 13-14). Narrator does not give in, and he makes sure he keeps his promises. The the forest is often a symbol in Frost’s poetry. It is symbolic of tempting force which can make an individual off track. This, of course, is something that everyone in the world has gone through — being tempted away from doing what an individual know is right and just (Cook 10).

Universal Human Experience of Choice in Robert Frost's Poetry. (2017, May 05). Retrieved from http://studymoose.com/universal-human-experience-of-choice-in-robert-frosts-poetry-essay 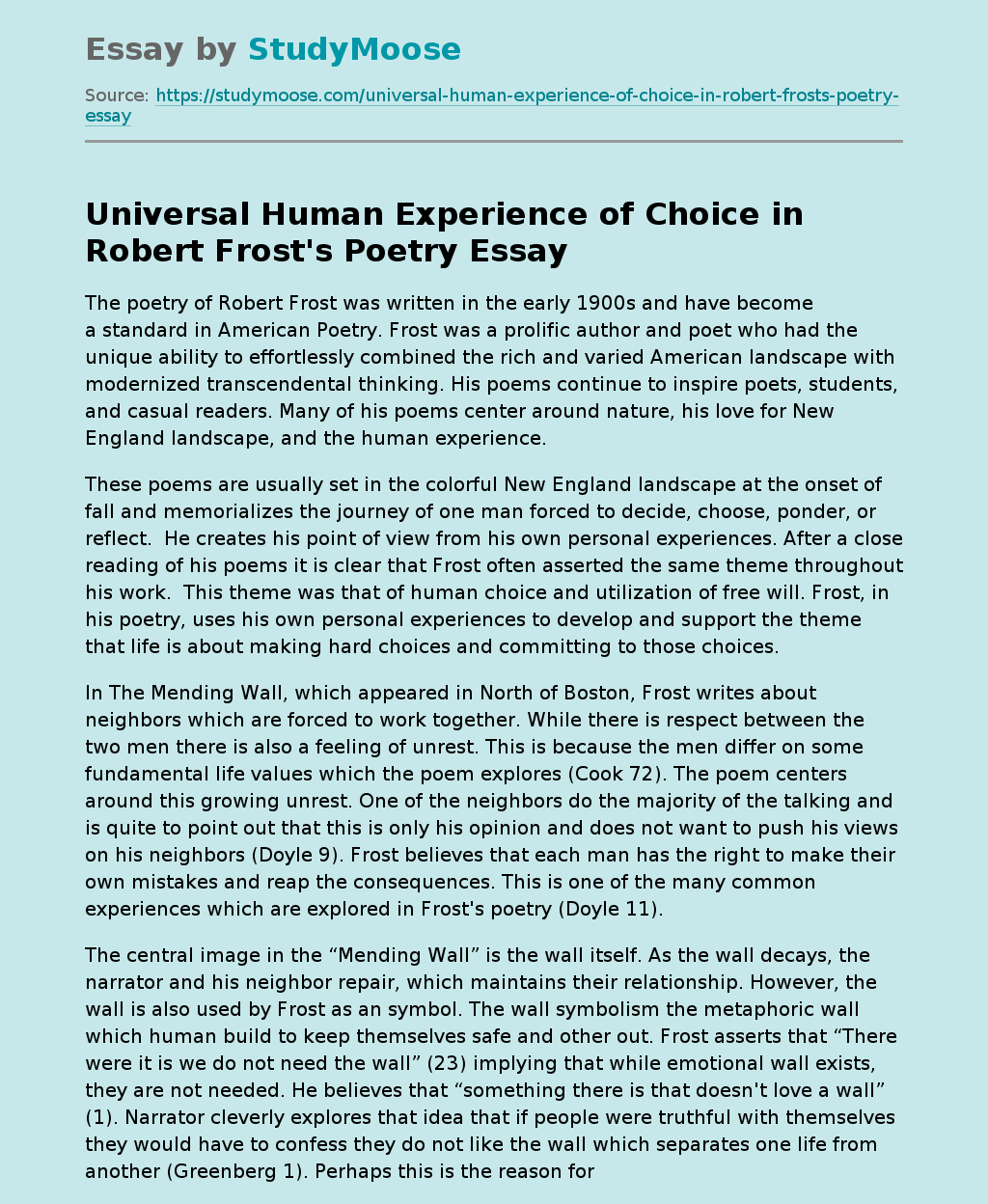