The United States at Pearl Harbor according to Sun Tzu

The day that lived in infamy did not draw its notoriety from the fact that the Japanese attacked America at Pearl Harbor without declaring war; it was because the dawn attack on Pear Harbor was so successful for the Japanese and consequently so devastating for the Americans. One of the main points of contention was how the United States could have been surprised; this is in view of the fact that even the Japanese themselves were not sure that they could surprise the Americans.

Don't use plagiarized sources. Get your custom essay on
“ The United States at Pearl Harbor according to Sun Tzu ”
Get custom paper
NEW! smart matching with writer

Many authors2 have shown that it is true that the United States did have in its possession information that could confidently point to the extreme probability of an attack on Pearl Harbor.

There have however, been many interpretations on why the United States have still failed to put together a respectable defense3 on the 7th of December, 1941. This paper would proceed to examine the United States’ conduct of intelligence operations prior to Pearl Harbor through the perspective of the strategies expounded by Sun Tzu. In the process, this paper would attempt to show that the United States could have increased her chances of averting the disaster at Pearl Harbor if Sun Tzu’s strategies regarding intelligence operations have been followed.

The defense of Pearl Harbor prior to the attack was the joint responsibility of the US Army and Navy. The army stationed in Hawaii is commandeered by Lt. Gen. Walter Short and the Pacific fleet anchored there has at its helm Adm. Husband E. Kimmel. Because of the fact that the United States did not want to be the first to make an offensive move in a war involving Japan4, Hawaii, like all other American military stations, have to prepare for a potential military attack within a defensive mindset while waiting for ongoing diplomatic proceedings between Washington and Tokyo to be concluded. The crux of the intelligence operation during this period of time is therefore being able to capitalize on any knowledge of how the Japanese are responding to the diplomatic proceedings on the military front and be able to anticipate a Japanese attack should the negotiations fall apart. Military forces could not be placed on high alert indefinitely as it is technically still peace time and going on an overt warlike stance may impede the diplomatic process. Kimmel and Short thus have the task of discerning the signs that would justify ratcheting their forces into the intense effort required in preparing for an enemy attack.

And being able to discern “signals and indicators’5 is exactly what Sun Tzu would expect of a competent commander of troops. Both Kimmel and Short failed in this regard. Kimmel failed most notably in his inability to recognize the fact that the ordering of Japanese diplomats in the world by Tokyo to destroy their codes and code machines is a major indicator of the fact that Japan is preparing to go to war6. Although Kimmel received this warning on the 3rd of December, 1941, a full four days before the attack, he did not initiate any action because, in his own words, “I didn’t consider that (as) being of vital importance when I received it.7” Short also fell short of Sun Tzu’s demands in this respect. The most unforgivable case against Short in this regard was made by Henry C. Clausen in that even if Short has no spies available to him, he should have been able to sense the change in the wind by reading the newspapers in Hawaii which documented in detail the diplomatic proceedings8 between Washington and Tokyo and even Japanese military actions. Another instance where Short was not able to recognize the significance of intelligence received was the dismissal of a report received on the 6th of December that a person in Tokyo has been inquiring of a suspected Japanese agent then living in Honolulu about the exact location of military assets in Hawaii9.

Short also was not up to the standard of another of Sun Tzu’s expectations, which is that an able commander should be able to choose a good spy10. When Short was taking over the command of the Hawaiian Department from Maj. Gen. Charles D. Herron during the February of 1941, Herron told his successor that a competent man that should be appointed to the position of G2 (Intelligence), would be Col. George W. Bicknell11. However, Short promoted another person, Brig. Gen. Kendall J. Fielder, an officer who proved to be both ill-suited to the job of intelligence gathering and interpretation. Fielder was ill-suited because of both professional and personal traits. Professionally, Fielder had no prior intelligence training and was not cleared to read Top-Secret intelligence12. As a person, Fielder was extremely irresponsible, being “more interested in his magic tricks, and his next golf game, than in trying to figure out the Japanese and what they might be doing.”13. These two facets of Fielder, professional and otherwise, combined to produce an intelligence officer that Roberta Wohlstetter described as “not especially concerned about trying to read beyond the obvious meaning of any given communication that came under his eye.14” In contrast, Bicknell has been doing intelligence work for longer15 and is better suited for the job because of his active initiative16. His potential for having alerted Short to the dangers that are imminent if he had only been given the post of G2 is significant. It was therefore likely that Short would have been better warned and therefore better prepared for the Japanese attack if he had had the wisdom to make Bicknell his G2.

Kimmel and Short however, would not be the only one Sun Tzu would criticize for the failure of intelligence at Pearl Harbor. There are many entities that ran foul of the crucial Sun Tzu maxim, that “If ignorant of both your enemy and yourself, you are certain in every battle to be in peril.” One major culprit that failed to know itself is the United States military leaders. The United States was operating an intelligence system so plagued with inter-service rivalry17 and excess internal security18 that frequently intelligence received could not be utilized. Inter-service rivalry meant that the Navy and Army had the incentive to withhold information from each other, making, for example, the intelligence procured by the Navy of no use to the Army19. Excess security meant that a lot of intelligence that is available to the United States military is not made available to all the people who needs to know it, such as in the tragic example of Col Fielder, who as head of intelligence of the Hawaiian Department, was not even cleared to read Magic20. The fact that the United States was not aware of this fact points to the fact that she does not know herself. It could thus safely be said that if the United States have been aware of this organizational weakness, they could have corrected it, possibly by setting up an agency such as the Central Intelligence Agency and thus be able to better make sense of the relevant information in regards to Pearl Harbor and possibly avoid the disaster.

Although there are many other factors, such as bad luck and the indecisiveness of President Roosevelt21 that led to the United States being surprised at Pearl Harbor, it does not detract from the fact that the factors outlined in the preceding passages are the major bottlenecks that prevented the United States from mounting an effective defense. Bad luck may cause the dissemination of information to be incomplete, but a commander able to read the ‘signals and indicators’ of the times would still be able to be forewarned. The commander may be deceived by false signals put forth by the enemy, but if the commanders have knew that they were suffering from poor internal communications and rectified the problem, they would be able to better separate the signal from the noise by conferring together. And of course, by appointing able men to intelligence processing, commanders would be able to make sure that the chances of recognizing the correct signal and understanding its significance would be much higher. This paper would therefore advance that if all these problems have been addressed according to Sun Tzu’s recommendations, it would very likely have meant that American losses at Pearl Harbor would be dramatically reduced while at the same time costing the Japanese a much higher price22 for whatever gains they procured in Pearl Harbor.

The United States at Pearl Harbor according to Sun Tzu. (2020, Jun 02). Retrieved from http://studymoose.com/united-states-pearl-harbor-according-sun-tzu-new-essay 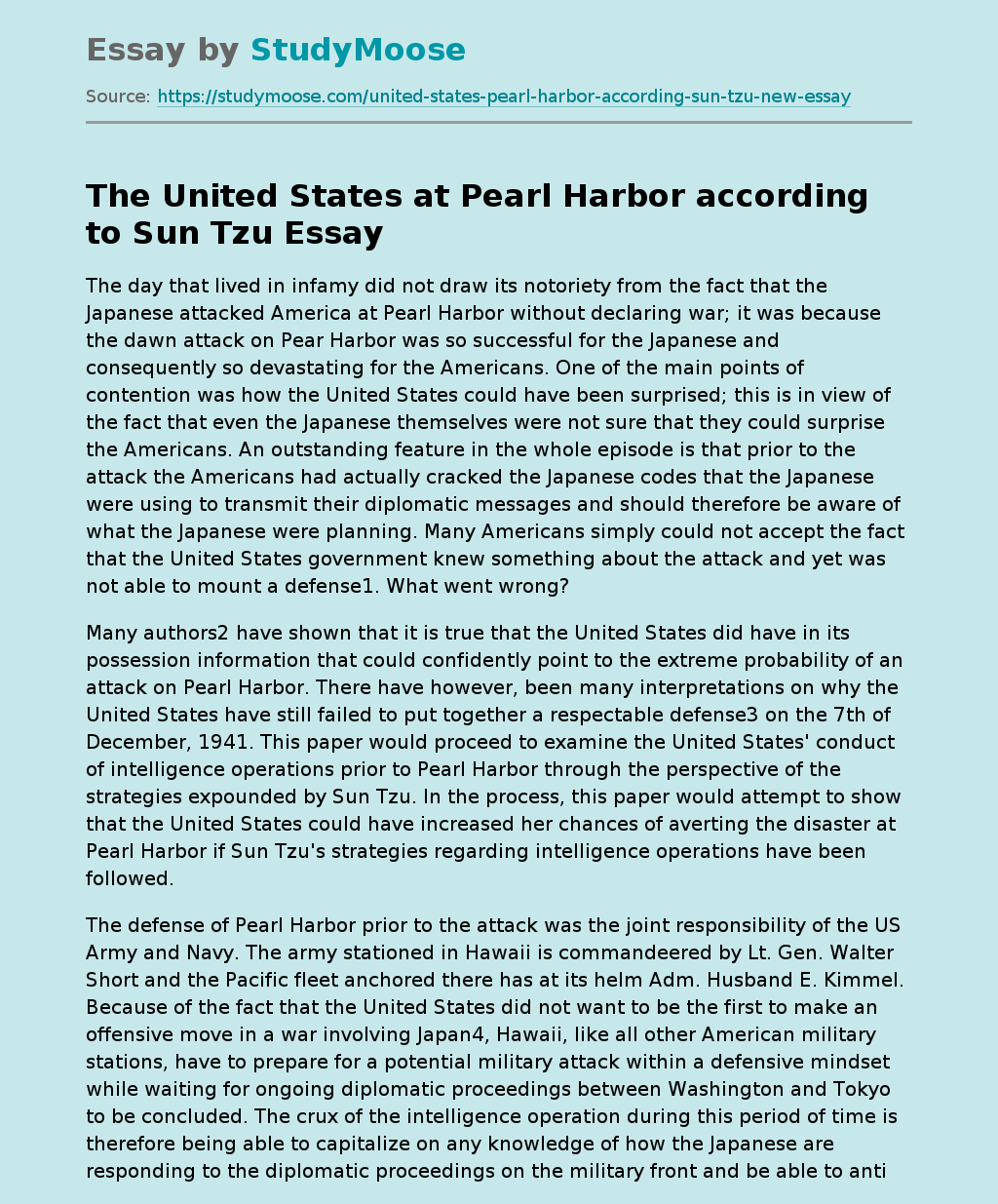