The rate of unemployment in Ireland has continued to rise since 2008 and the country has risen from having the second lowest unemployment rate to the second highest within the European Union countries in two years (Keenan, 2009). As a reflection of the sudden end of the building boom, Ireland has experienced a higher rate of joblessness than other countries in the Euro zone. According to statistics released in 2009, Ireland, which had an 85 percent unemployment rate increase, was followed closely by Spain and USA with 64 and 62 percent increase rate respectively.

Don't use plagiarized sources. Get your custom essay on
“ Unemployment in Ireland ”
Get custom paper
NEW! smart matching with writer

Currently, Ireland’s rate of unemployment has risen to 13. 4 percent as compared to the 13. 2 percent rate in May this year. This is the highest unemployment rate that the country has experienced in a period of 16 years. Furthermore, the number of people seeking unemployment benefits has increased with 3. 4 percent since May bringing the total to 452,882 including the 79,239 people who are in casual or part-time jobs but qualified for welfare (Pogatchnik, 2010).

The unemployment rate has continued to increase despite the fact this export-driven country has resumed growth.

Nonetheless, during the first quarter of the year, Ireland experienced an increase in the output of both the service and production sectors which recorded 1. 2 and 1. 5 percent increase respectively (“Latest Labour Market”, 2010). Even with the increase in the service and production sectors, Ireland’s economic growth may continue to decline because of the fact that the unemployment benefits claims have remained relatively static since February this year.

While the service and production sectors have largely been boosted by the chemical and pharmaceutical goods sub sectors, the private consumption and investment sectors have been adversely affected by joblessness (Finfacts, 2009).

The private consumption and investment sectors have been seriously affected because of the major rise in precautionary savings and the negative expectations of household’s employment. Reasons for the Increase in Unemployment Rate:

While it is largely predicted that Ireland’s annual gradual economic growth will be realized in 2011, the country rate of unemployment has continued to increase due to a number of reasons. Ranked second in unemployment rate among European countries, with Spain being the first, Ireland’s rate of unemployment continues to soar because of Global Recession and Contraction in Housing Construction: The genesis of the increase in unemployment rate in Ireland can be traced back to the 2008 global recession and the contraction in housing construction in the second half of 2007.

Prior to these factors, the unprecedented economic growth in Ireland in the early 2000’s was largely attributed to membership in the European Union, entrance in the Single Market, low corporation income tax rate, stable public finance position and a high percentage of the working age population (“Irish Economy”, n. d. ). As a result of the global recession and reduction in housing construction, the pace of economic growth of the country started to decelerate. Consequently, unemployment rate started to rise with a subsequent increase in house prices and collapse of Irish export growth.

Gross Domestic Product: The significant fall in Ireland’s Gross Domestic Product (GDP) could be a possible reason for the increase in unemployment rate within the country. Sine the year 2007, Ireland experienced a 2. 7 growth in the gross domestic product in the first quarter of this year. Even though this rise was the first in Irish GDP since the beginning of the economy buckle, it did not improve Ireland’s economy that is still struggling. However, Ireland experienced a GDP fall of 7. 6 percent the previous year from the previous figure of 7.

1 percent. Gross National Product: The unemployment rate in Ireland has continued to increase because of the fall of the Gross National Product (GNP) with 10. 7 percent. In the first quarter of the year, Ireland experienced a decline in gross national product of o. 5 percent as compared with the preceding quarter. As a matter of fact, the gross national product was 4. 2 percent lower in the first quarter of this year as compared to the corresponding quarter of 2009 (“Quarterly National Accounts”, 2010).

The gross national product is usually derived from the adjustment of the gross domestic product for income flows between inhabitants and non-residents. Even though the timing of these income flows can be unpredictable, they usually include the profits of foreign owned enterprises. These foreign owned enterprises registered an increased profit by € 2,007 million between the first quarter of 2009 and the first quarter of 2010. Consequently, the decline in Ireland’s gross national product was harsher than that in gross domestic product.

To determine the GNP in the first quarter of this year, several factors were examined including capital investments, volume of output of industry, customer spending and net exports. As compared to 2009, there was an increase in the volume of output of industry and net exports while capital investments and customer spending decreased. Spending and Income Gap: While the Irish government appears to be unable to prevent the economic situation, the rate of unemployment continues to rise because of the alarming rate at which the gap between spending and income is growing.

According to statistics released by the Central Statistics Office, the country’s customer spending rate decreased with 0. 8 percent by April this year. Furthermore, the transport, manufacturing and retail sectors will continue to lead in job losses even if wages are reduced (“Economic Forecast and Commentary”, 2010). Notably, if wages are cut, there will be a decrease in customer spending which will turn affect both the GDP and GNP. Taxation Policy: Since early 2000s, the significance of capital taxes as a source of revenue was boosted by country’s taxation policy.

The country’s economic success within this period of time was also attributed to the growth of foreign direct investment and performance of sectors for internationally-traded goods and services (Limerick, 2006). However, tax revenues have radically and reduced due to the slump in the property market. Furthermore, the tax revenues continued to reduce because of the effect that slowdown in residential sector had on both employment and consumption. Unemployment Rate in Euro zone: In the wake of the global recession that has destroyed jobs; the rate of unemployment has probably peaked even in developed economies.

In fact, within countries in the Organization for Economic Cooperation and Development (OECD) countries, the unemployment rate has come to a high of 8. 7 percent in the first quarter of this year (Deen, 2010). As compared to the last twelve years, the rate of unemployment in the Euro zone with close to 23,311 million people jobless in April 2010. Out of twenty-seven countries with the euro area, only one country i. e. Germany registered a 0. 5 percent drop in unemployment rate of (“Euro Area April”, 2010).

Countries such as Malta, Luxembourg, Estonia, Latvia and Lithuania recorded an increase in the unemployment rate with Malta and Luxembourg recording the smallest increases. By April 2010, Netherlands had the lowest unemployment rate in the euro area with 8 percent while Latvia, Spain and Estonia having the highest rates respectively. In conclusion, the Irish government needs to take crucial leadership roles and initiatives to decrease the country’s debt and increase the rate of employment. These measures may include the reorganization of taxation to ensure fair distribution of wealth and increment of taxes rather than cutting wages.

Other possible measures may include the streamlining of corporation tax with the Western European average, tightening of tax exemption rules and commencing mass employment projects. 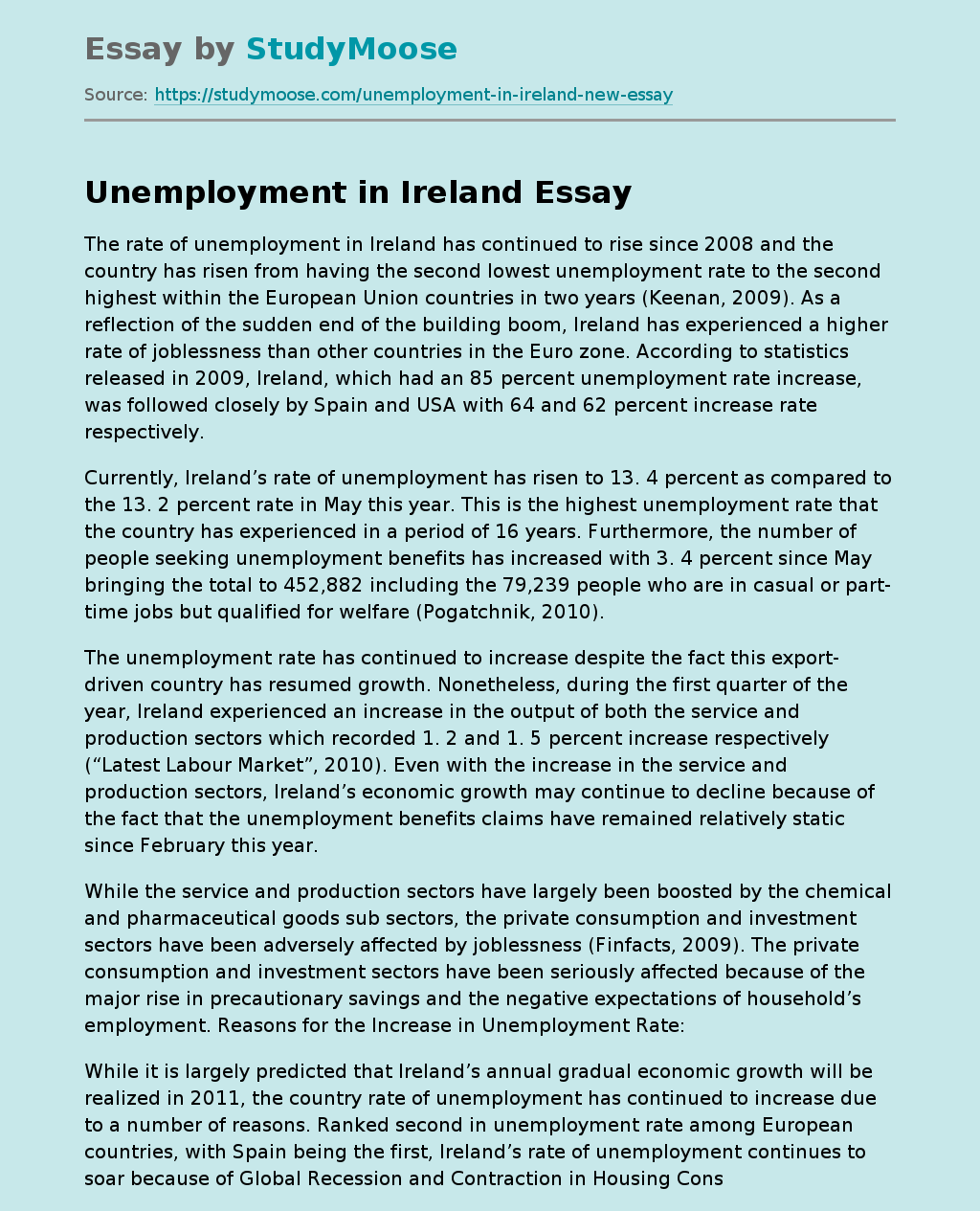