Funiciello begins her book ‘Tyranny of Kindness’ with a bang. She highlights the cruel kindness of the multitude of welfare measures that do not fare well! Whereas the taxpayers are told that they (the schemes) are the ‘best orchestras’, in reality they are the ‘muffled drums’ as for their benefit to the poor. The tragedy that struck the Ali family and their subsequent struggles, make even a horror story look like the kindergarten stuff!

Describing the incident she writes, “If the Ali family had become homeless, exactly what would have happened can not be said with absolute certainty.

Don't use plagiarized sources. Get your custom essay on
“ Tyranny of Kindness ”
Get custom paper
NEW! smart matching with writer

Still, these are commonalities shared by women of all races and religions, from coast to coast, experiencing either rural or urban poverty. The merciless anxiety and humiliation of being shuttled back and forth like herded animals, the stress of keeping kids in school are constant. Only the details vary.”(p.5)

According to the Washington Post, Tyranny of Kindness is sterling book to be published on the subject of poverty and welfare, during the last three decades.

Where lay the strength of the book? Is it the theory? Is it the practical? The answer is, it is both! What is theory after all? It is other man’s experience. This book becomes the authoritative indictment for the simple reason that Funiciello has the experience of living through both the side of the fence.

The so called welfare system which is not at all fair to the poor persons for whose benefit it is intended to and  is  framed, is bitterly criticized by Funiciello with adequate evidence. How poor people are entrenched in the absurdities of the procedures, the schemes help the professionals managing the programs, not the ones for the professed benefits of the poor-especially women and children. She is addressing these problems and the necessity to find a cost-effective alternative, so that the tax-payer’s money does not go into the drain. The bureaucracy eats the cake of the welfare schemes and what remains for the poor and the weak is just the empty fillers!

Throughout the book the unbreakable thread of Funiciello’s concern for the genuine welfare of the poor and the women passes through. She highlights the implementation aspect. What you provide to the poor is not that important. How you provide, what you provide is more important. Does the welfare measure contribute tangibly for improving their standard of living as well as standard of life?—this is the important question. Poverty management needs to be done by those who understand what it means to live in perennial poverty—if possible, those who have the first hand experience. The poverty alleviating program should strengthen the individual, the group or the society. It should never weaken the spirit of the receiving party. It is the considered opinion of Funiciello that soup kitchens, homeless shelters, and welfare itself are not helping the poor only.

To tackle the issue of poverty requires extraordinary effort and great will power. This problem is like the advancing avalanche. It can not be controlled or stopped by the fence of straw. In a book related to welfare these issues are highlighted because of the intimate relation of welfare schemes with poverty. The rich do not require welfare schemes. They are capable of handling or mishandling their welfare independently. They don’t require Government support. Lack of awareness is the self-inflicted curse of the poor.

The real development of the poor section of the society does not start with goods and doles. It starts with the education of the people, organization and discipline. If these three are not there the resources remain not properly utilized, which ultimately leads to the failure of the welfare programs. The corrupt and inefficient machinery of implementation is the root cause of failure of welfare initiatives.

The women must have an authentic say, not on paper, but on practical terms. Women need to be in charge of the grant/aid distributing machinery. They should be in a position to take irreversible decisions as to who should get the benefit of the welfare schemes and when.

Funicello makes the reader aware of the desperate situation of women and children prevailing in the society. Desperate situations need desperate and thoughtful remedies. Funiciello is thrice-blessed on this account. She was a welfare recipient, she understands the actual functioning and the reality of non-profit organizations, and she has the power to execute the welfare schemes. She knows the difference between the chair less powers and the powerful chairs!

What she means when she says that poor women need a home in the women’s movement is, women need a solid, permanent platform, their own launching pad, from which they can initiate the implementation of the welfare programs. The backbone of the functioning of the democratic set-up is, individuals need to be aware of their rights and responsibilities. She made the shocking revelation in the book that majority of the welfare beneficiaries were white and not black. According to the author poverty programs will not serve any useful purpose, unless housing accommodation is assured to all and an income adequate to lead a decent life.

The poverty alleviating programs should be managed by men and women who understand poverty. Those individuals who believe that basic conditions need to be created for the people to become basically and industrious! So, the personnel she selected for managing the program, when she had authority to do so, were ordinary women who knew the pulse of the welfare programs. No fat salary and extraordinary perquisites were offered to those women.

She argued and proved that the so called charity of the big organizations and the philanthropists was no grant for welfare. It was a charity of motivated desires and to get tax concessions. Funiciello is also wary of liberals who claim to support welfare mothers, but are too busy talking about self to hear the women themselves (pp. 212-255). She takes the Catholic Church to task for claiming to organize against poverty, while it is simultaneously one of the country’s largest land holders (p. 226-227)

Contrasting, Funiciello’s social justice calls for a universal guaranteed income which would prevent people from becoming poor. Funiciello says the success of this program would ultimately rest on initial and subsequent program appropriations, but provides European evidence to document these programs do work and people do not stop working with a guaranteed adequate income (pp. 300-302).

Funiciello is pained at the inner-city and older suburban neighborhood deterioration. She goes to the root cause as to why this unfortunate development is taking place. The closure of units that contribute to the economic welfare of the area such as stores and commercial banks gives scope for those who revel in reaping the benefits of underground economy. Her strong appeal, though emotional, carry the tag of verifiable facts. Her arguments though indicting, stand the test of proof.

5) How does all this relate to Women’s Studies 10?

Funiciello’s book has wealth of information related to the gender study. It provides information how women live their life in trails and tribulations. It contains issues related to class, ethnicity, and location. It highlights the importance of education in the life of a girl child. The cultural and social explanations about the gender are provided with stunning examples. How masculinities and femininities act and react on each other is explained.

Women must give up the inner conviction of uselessness. Agreed, some evil tendencies of men have caused them damage, social welfare measures have proved futile for their prosperity, and yet it is she who has to fight her battle. That is the best alternative and that is the only alternative. As for the welfare schemes, the beauty lies in not big schemes; it is with the men and women who execute those schemes. 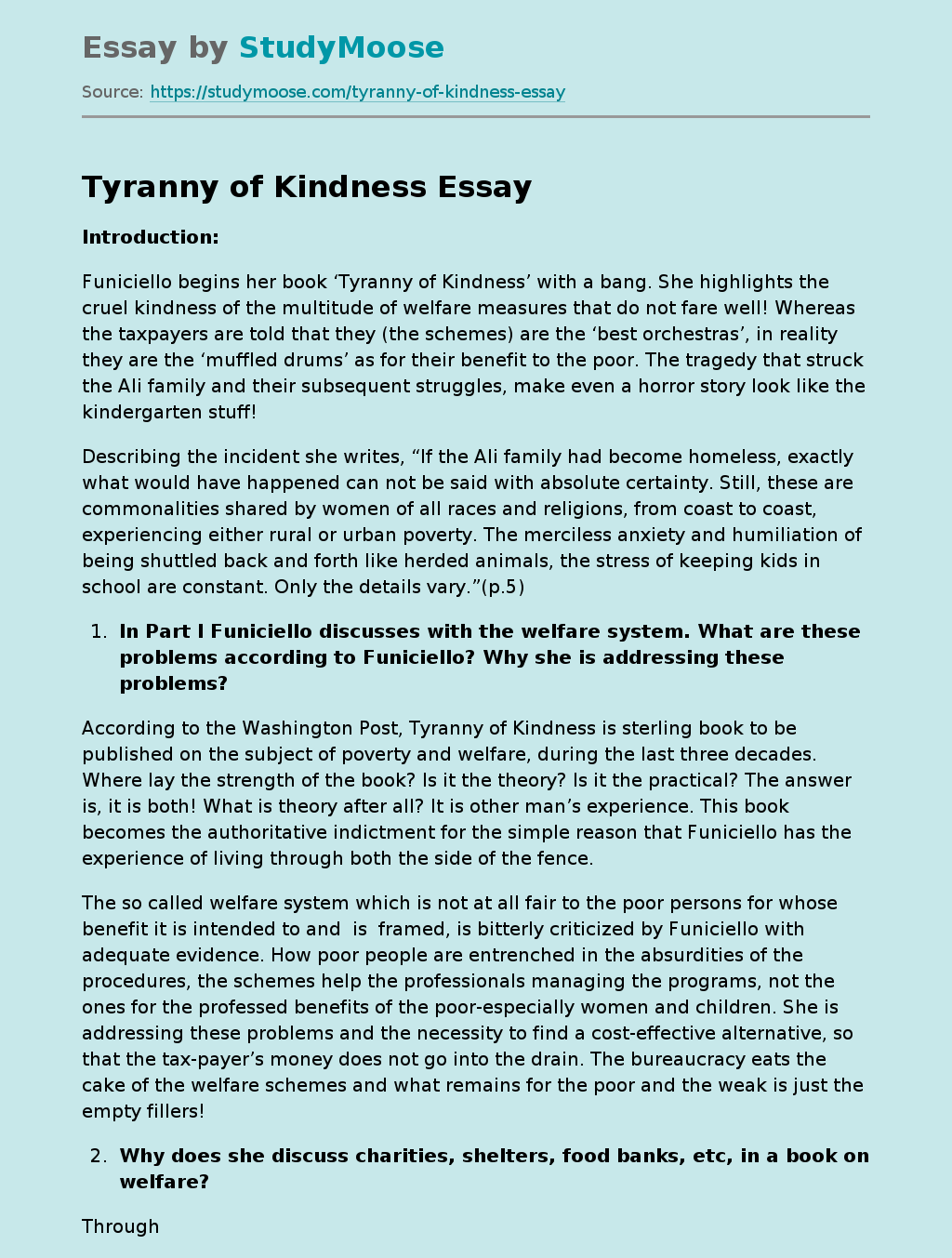