True Love in Poetry of Shakespeare and Donne

Throughout the years, humans have rewritten what true love means. The contemporary meaning of true love is the feeling of lightheartedness that one experiences when around another human. True love in Shakespeare and Donne’s time period, was a deep spiritual and emotional connection towards two humans. The connection never fades and grows stronger with separation. Many people believe that one can fall in and out of love; however, many poets wrote about a love that will never disappear. The love that they depicted regarded the truest of all loves.

Don't use plagiarized sources. Get your custom essay on
“ True Love in Poetry of Shakespeare and Donne ”
Get custom paper
NEW! smart matching with writer

William Shakespeare’s Sonnet 116 is an extremely well-known poem for its description of true love. The love that the persona describes does not admit impediments and is unchanging and perfect. According to him, love acts like a guiding star for lost ships, not shaken in storms. Love will guide two people throughout their lives and will not fall apart in the stormy times.

Shakespeare is completely certain that what he describes is true love to the point where he says that if his statements can be proved false, then he should have never written a single word and that no man has ever been in love. The ideal, romantic love outlasts even death and admits no flaw. Throughout the three quatrains, Shakespeare breaks down love into the simplest forms; in quatrain one, he states that love is not changeable; in quatrain two, love is a like a fixed mark that guides ships throughout storms; and in the third quatrain, he says that love is not Time’s fool, stating that he is certain that what he describes is true love.

“It proposes a love which exists in an unchanging present, impervious to time’s millioned accidents” (Hammond 211). The start of the sonnet provides a definition of a love, which eventually excludes all action, identity, and knowledge (211). Shakespeare’s beginning lines of this sonnet are reminiscent of marriage vows that a couple repeats to one another during the service (212). “Alteration and remover are primarily words to describe infidelity” (213). The Day of Judgment is the only time in which love may cease to exist (Vendler 490). The young man, by mentioning these impediments, has announced the strengthening of his own attachment to the listener, reinforcing the marriage of true minds. One must wonder how a marriage can last if it is not made of true love. Perhaps the persona realizes that God requires that each partner love the other, through sickness and health, forsaking others until death do each part. Those requirements can only be held onto in a marriage of true love.

In another verse, titled A Valediction: Forbidding Mourning by John Donne, a second persona describes how true love acts and is evident in daily life. Many historians believe that Donne wrote the poem for his wife, Anne Donne, before his departure in 1611, for France. The valediction is the guise in which the speaker attempts to persuade his lover to remain assured of his love while he is gone (Cavanaugh para. 2). He tries to define and rejoice in a love that transcends the physical realm, proving that their love can survive the separation (Bennett 178). The separation of the lovers is like the separation that is caused by death. The physical bond that he shares with his wife will dissolve quietly like the soul of dying man (Bennett 179). Donne expresses his need for no tears and crying, believing that they should not reveal their sacred love. He asserts that if they would display their affections of their grief, their love would be defiled and would be no better than that love of ordinary people (182).

“When disturbances happen between their love, if he leaves, it will be like the far-off trembling in the heavens and will be innocent and have no major bearing on their relationship” (Bennett 181). The love Donne describes is one that transcends the physical nature of relationships. Ordinary lovers are caught up in the physical presence of the other person; however the perfect love he enjoys does not need the presence of the physical body to survive (183). As speaker and his partner are connected at the soul, they will never be separated, even though their physical bodies might be. In the sixth stanza, Donne describes his love as pure and precious as gold. Their love can be stretched and expanded without damage, just as pure gold is malleable (185). Donne’s most famous comparison occurs in the seventh stanza, where he compares his love to “stiff twin compasses.” Joan Bennett describes the compass as the following:

The twin compasses are described as two only in the sense that there are two legs joined permanently at the top. One leg, “the fixed foot” is planted firmly in the center. The other “travels”, describing a perfect circle, returning to its point of origin. The “fixed foot” of the center foot “leans and harkens” after the other that “far doth roam”. The speaker explains that the center foot, the person who stays at home, makes sure the absent lover comes back to for a complete circle because of its firmness (para. 18).

With the circle having no beginning or end, Donne describes what a perfect love is. No man has detailed love in such an unique way that grips at the hearts and souls of the readers. One only hopes to find the love that Donne has expressed. Throughout the two poems, love is shown to be much more than a physical attraction between two people. The attraction between two people can create lust, but a deep connection between two people creates a love in its truest of forms. True love could be likened to a pole to hold on to when a moment in time becomes too difficult. The steadfastness and stability of love are shown vividly throughout these two poems. The male speakers try to prove that love can exist in many forms, yet the one that will last forever is a “mind connection” that forever binds two people to one another. “A Valediction: Forbidding Mourning” shows how a love can survive by not being continually physical with one another.

In the same way, Shakespeare’s Sonnet 116 describes the love between two people as more of a spiritual connection. Both speakers prove that love does not try to change the other person and will accept him as he is. Whether or not the authors were describing love in their lives, their two poems have made humans seek a deeper love with one another. Human nature begs for a connection that cannot be expressed in words. Love transcends time and space. The two poets described true love in almost the same way. The only difference was the direction that each took. Shakespeare compared true love mainly spiritually while Donne was more metaphysical. Each person has different ideas regarding the qualities in love, though most are described here in the poems.

The connection described in the two poems is evident in marriages that last. Those couples that later spend over fifty blissful years together are those that married for a deep feeling of fulfillment than that of a physical need that was met. True love has become misunderstood in the past years. Shakespeare and Donne realized what it took to make a relationship work and what true love really is. True love stands the test of time and never changes. True love is what it was two hundred thousand years ago and will continue to be in years to come. Love is what makes humans live and co-exist. While Time changes people, love does not change. As an ever-fixed mark, love is always waiting for one to grab hold of and stand with in times of need. The two poems encapsulate what couples repeat in their marriage vows; love is here and will always be near by, and that one another should stand by their partner just as their love will always remain true.

True Love in Poetry of Shakespeare and Donne. (2016, Jun 22). Retrieved from https://studymoose.com/true-love-in-poetry-of-shakespeare-and-donne-essay 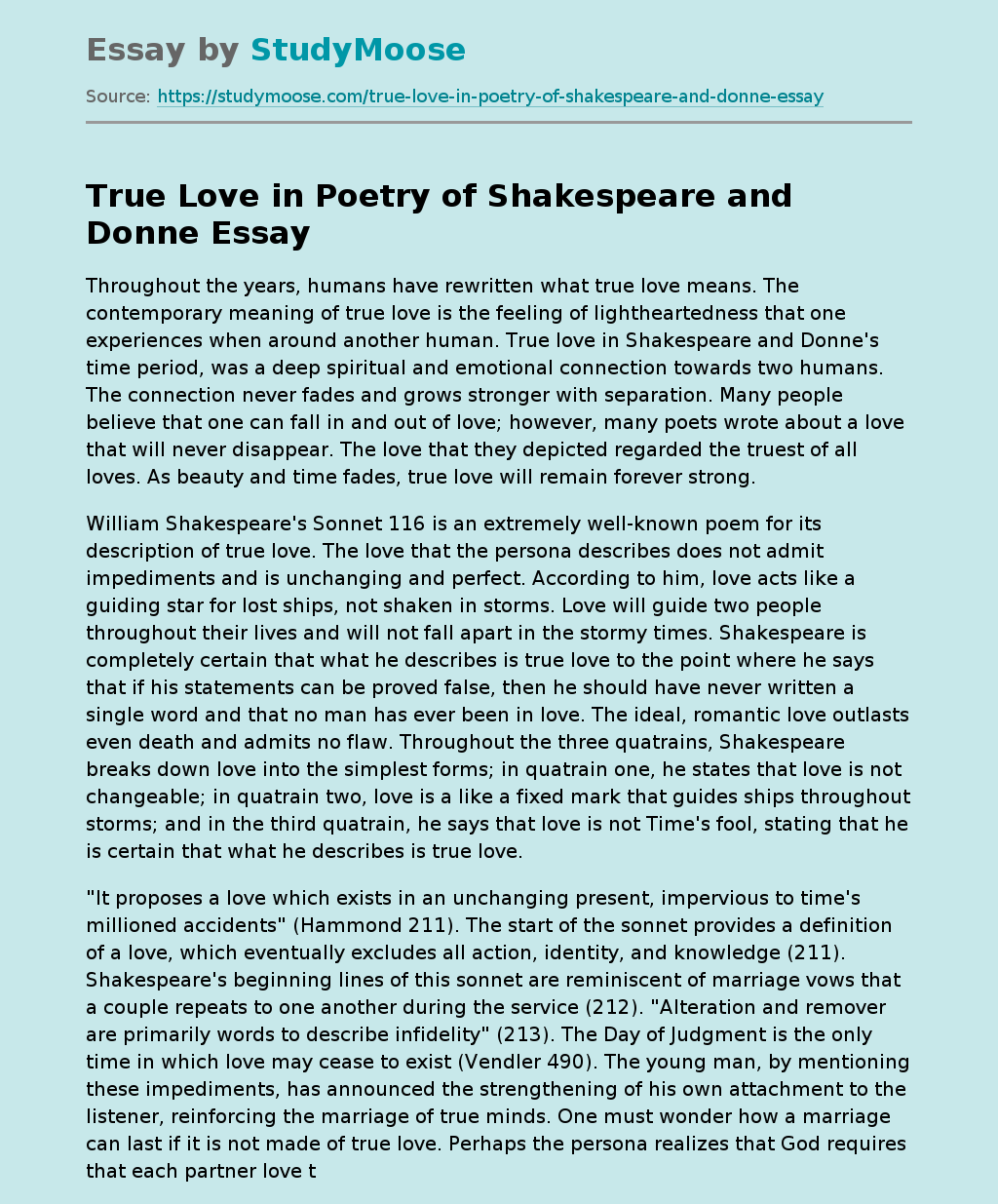