Consider observed systolic blood pressure monitored during traumatic events on a representative sample of size n from a given population. We assume the response is associated with a time where, We consider a model where is an unknown smooth function and an error vector. For Bayesian approach to inference, we must put a prior on the unknown functions as well as all parameters.

This variance indicates how the spatial dependence parameter relates to the dynamic properties of the trend. Let be a set of individual specific covariates which is informative about the dynamics of traumatic events. Since each subject in the representative sample is characterized with a unique covariate set, we propose to model the spatial dependence parameter based on some important covariate statistics instead of the covariates themselves.

In particular, we consider normal model for the spatial dependence parameter priory, where, is a vector of coefficients modelled with a normal prior where and are known.

We consider inverse gamma models for where are known. The remaining standard deviation parameters are modelled with distributions. where all hyperparameters are known and denotes the half-t distribution with scale and degrees of freedom . A half-t model can be modelled as a scale mixture of inverse gamma distributions (Wand et al. 2011). Let be auxiliary variables. Then the half-t priors in terms of scale mixtures of inverse gamma models are; These alternative forms of the Half-t priors will be employed to simplify computations.

Variational Bayes methods (Attias 2000), approximate the true intractable posterior distribution with a distribution belonging to some tractable class The distribution, can be allowed to follow some parametric family such as multivariate normal, or can be divided into blocks with the assumption of posterior independence between the blocks. Then a choice for is made to approximate as well as possible, via minimizing the Kullback-Leibler divergence between the two distributions, Based on (3), the logarithm of the model can be expressed as

Due to the non-negativity of the Kullback-Leibler divergence, that is, serves as a lower bound on where denotes expectation with respect to . From (5), minimizing the Kullback-Leibler divergence between and is equivalent to maximizing the lower bound . Note that when Otherwise, will be close to and a good approximation is attained for purposes such as Bayesian model choice if is close to (Bishop, (2006) and Ormerod and Wand, (2010)).

Now we apply the variational approximation technique to our traumatic systolic blood pressure model (1). Let denotes the full set of parameters in the model, we consider the following variational approximation to the posterior distribution where and Let denotes the set of all variational parameters in the model. We will write for suppressing the dependence on when needed. The lower bound can be derived in closed form based on the above variational posterior. We optimize this lower bound with respect to the variational parameters via variational Bayes iterative algorithm, where the following convention for notation has been adopted. and The expectations involved in the above notations are evaluated based on Lemma 1 with details provided in the appendix. The full set of the variational updates are given in Algorithm 1 below.

A standard approach to Bayesian inference in complex models is to use Monte Carlo methods such as Markov chain Monte Carlo (MCMC) to generate samples from the posterior distribution, which can then be used to approximate relevant expectations and probabilities. See for an introductory account. A common algorithm for conditionally conjugate models popular for its automated character is the Gibbs sampler, where we update parameter blocks by sampling from their posterior full conditional distributions. For the model we have considered here, a natural choice of blocks leads to tractable Gibbs updates for most parameter blocks. However, the full conditional distributions for the parameters and do not have a standard form and it is natural to update them using Metropolis-Hastings steps, resulting in a so-called Metropolis within Gibbs scheme. Readers unfamiliar with these algorithms are referred to for further background and discussion. For the Metropolis-Hastings steps, a proposal distribution is required and variational Bayes approximations have been suggested as one way to obtain good proposals.

Another possibility is to use a so-called adaptive MCMC scheme where a good proposal value is learnt from the samples as the algorithm proceeds. See for a review of adaptive MCMC and some discussion of what is required for the validity of these schemes. Adaptive schemes usually require some initialization of proposal variances and recovery from a poor initial choice can be very slow. We consider initializing an adaptive MCMC scheme using the variational posterior. The detailed algorithm is given in Section E of the supplementary material. Although there are many adaptive MCMC schemes in the literature, the adaptive steps that we employ are similar to Algorithm 5.

Our MCMC algorithm uses Gibbs steps for all parameters except the parameters and for which adaptive Metropolis steps are employed. The derivation of the full conditional distributions for the Gibbs updates is given in the next subsection. 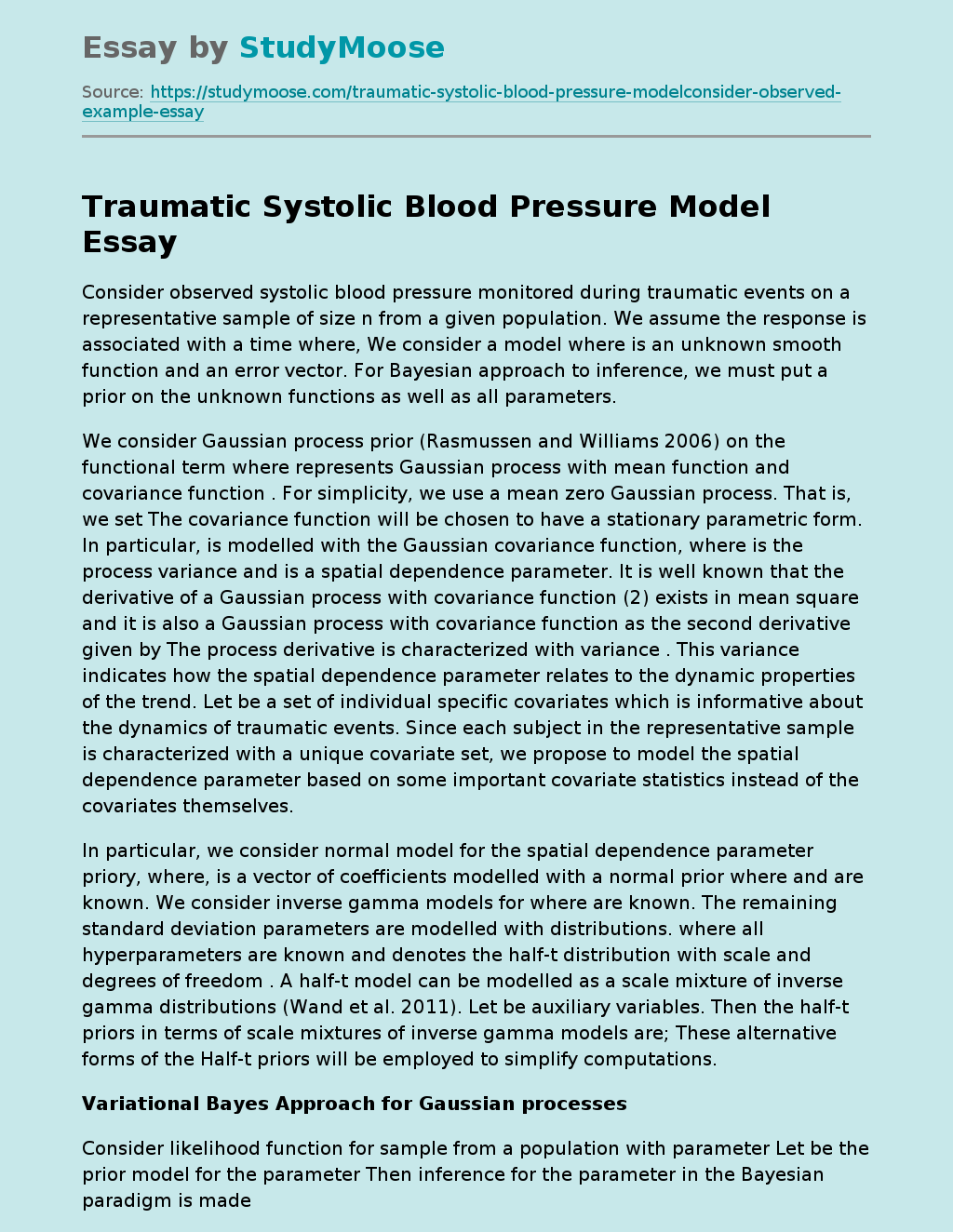