The biggest natural museum in the world is Nepal. Nepal is one of the richest countries in the world in terms of bio-diversity due to its unique geographical position and latitudinal variation. the elevation of the country ranges from 6m. above sea level to the highest point on earth, Mt. Everest at 8,848m, all within a distance of 150 km with climatic conditions ranging from sub-troppical to arctic.

Don't use plagiarized sources. Get your custom essay on
“ Tourism In Nepal ”
Get custom paper
NEW! smart matching with writer

Within this spectacular geography is also one of the richest cultural landscapes anywhere. The country is a potpourri of ethnic groups and sub-groups who speaks over seventy languages and dialects. Nepal offers an astonishing diversity of sightseeing attractions and adventure opportunities found nowhere else on earth. And nepalese are celebrates numerous annual festivals in traditional style highlighting enduring customs and beliefs.

We are knowing Nepal by different sectors, like Nepal is the richest country of mountains and it is knowing by the temples country and the second richest country of rivers.Our country is the birthplace of Gautam Buddha who is the founder of buddhism religion. We are the richest peoples with have many part of jungles and rivers and villages etc. In conclusion we proud to our country.

Because in our country there many national and international torists had come to travelling and trkking of mountains , villages and different cultural skims like or annual festivals, Dashain, Tihar, etc.

So all the people s who wanted to know Nepal is wel-come to Nepal. Nepal, a very beautiful, renowned for world heritage places for tourists worldwide. Trekking, rivers rafting, pungi jumping, mountain climbing, jungle safari are the more attraction of this country. Therefore the number of tourist are increasing day by day.

The land locked country Nepal is bounded by the Tibet Region of the peoples Republic of China, on the east by Sikkim and West Bengal and on the South and west by the Indian States of Bihar and Uttar Pradesh. Nepal is second very rich in water resources and mountains. Mount Everest is the world highest mountain and also is home to 8 of the 10 highest mountains on earth.

Tourism Sector plays a vital role for increase the GDP of Nepal. Although the main source of economic sustenance is agriculture, the tourist industry employs around 42% of the total working population of Nepal. The major religion in Nepal is Hinduism, and the Pashupatinath Temple, the world’s largest temple of Shiva which is located in Kathmandu, attracts many pilgrims and tourists. Other Hindu pilgrimage site include the temple complex in Swargadwari located in the Pyuthan district, lake Gosainkunda near Dhunche, the temples at Devghat, Manakamana temple in the Gorkha District, and Pathibhara near Phungling.

Buddhism is the largest minority religion. The World Heritage site Lumbini, which is traditionally considered to be the birthplace of Gautama Buddha, is an important pilgrimage site. Another prominent Buddhist site is Swayambhunath, the Monkey Temple, in Kathmandu. Muktinath is a sacred place for Hindus as well as Buddhists. The site is located in Muktinath Valley, Mustang district. 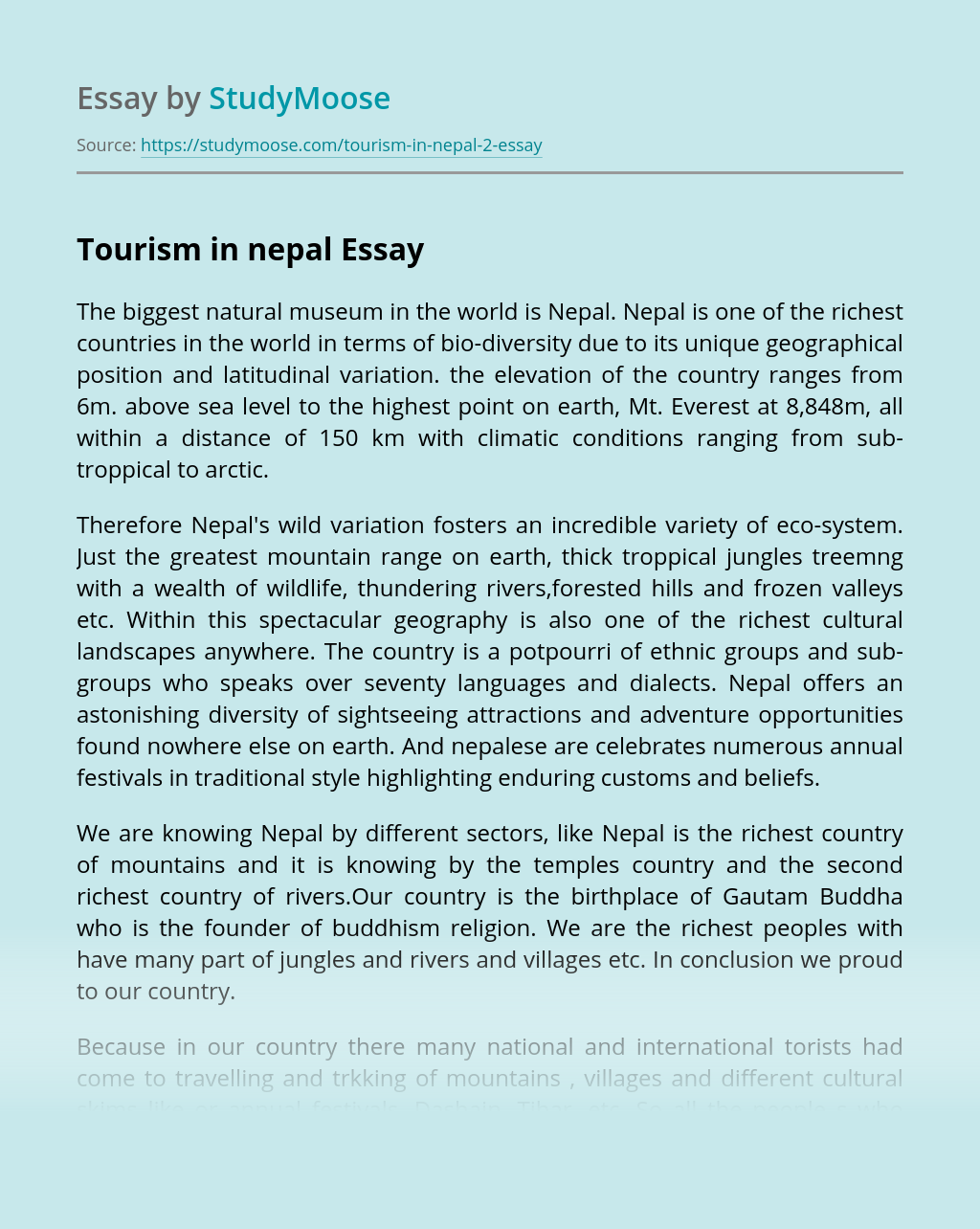