‘Topdog/Underdog’ by Suzan-Lori Parks is a play about struggles of everyday life of African American, about family identity and fraternal interdependence. There are two African American brothers, Booth and Lincoln who have to struggle together from teenage because their mother has left them at a very early age and their father abandons them. Initially Lincoln was a card hustler and used to trick people loose their fortune but once his partner got shot during a hustle, he swore off the cards.

Don't use plagiarized sources. Get your custom essay on
“ Topdog/Underdog by Suzan-Lori Parks ”
Get custom paper
NEW! smart matching with writer

He is making his full and sincere effort so that he can lead an honest life.

He starts working in an arcade where he mitates Abraham Lincoln, dressing in costume and wearing a white paint on face. Apart from his sincere effort, Lincoln finds his job in danger. Both the brothers live in a boarding house and professionally both have not achieved any success. Where Lincoln has swore off the cards, Booth wants to become a 3-card monte although he is not as good as Lincoln in this field.

The first half of the play revolves round the conflict between the two brothers where Booth wants Lincoln to leave his arcade job so that he returns to be a card hustler once again and both of them work as artners.

When finally Lincoln agrees to play with him, Booth seems to win almost all the game and became quite confident. Then Lincoln asks him to stake real money and play a round. Both of them stake $500 and play. Booth is overconfident that he will definitely win but he looses finally and realizes that he has been hustled by his own brother.

Booth could not tolerate that he was actually a looser all along and his win in the previous games was all set up by Lincoln so that he plays with overconfidence in the final game and loose eventually. He shoots and kills Lincoln.

Suzan-Lori Parks has featured competitions and reversals between two brothers. The two brothers have to depend upon each other for survival and when they have reached their thirties they want to struggle for a new start in order to come out of poverty. Lincoln finds a job in an arcade whereas Booth earns his living by petty shoplifting but has a desire to become a 3-card monte. Throughout the play both the brothers are seen competing with each other and this shows the real picture of the world where people live ith the feeling of competition and are busy trying to win over the other.

Brotherhood does not mean that two brothers are always in perfect coordination and even if they have to struggle for survival they have their own fields of competition. In this play Suzan-Lori Parks wants to show the real picture of egoism, competition and dream clashes between two brothers. Lincoln, who quits the card hustler job after his partner gets murdered is satisfied with his arcade job and just wants to come home and relax and get up the next day to go for his job.

He is also seen kicked off by his ex-wife Cookie and it seems he has no more dreams of having name and fame but only wants to live a normal life. But Booth who is in love with a young woman, Grace does not get satisfied with this arrangement. He wants Lincoln to get back to his old job of a card hustler and for this persuades him to play. However Booth finds that he has been ditched on both the fields and unable to tolerate his defeat kills his own brother ultimately. Parks has used the names “Lincoln” and “Booth” to rewrite social history of US and slavery.

In this play Lincoln impersonates Abraham Lincoln and gets assassinated daily for the paying customers. This encodes a deeper logic and the names and the exchange of black and white in the play ‘Topdog/Underdog’, gives the impression of chance and inevitability. By making Booth kill Lincoln in the end of the play Parks wants to explain that the black have no one to blame for their situation but they themselves are responsible for black on black violence. No one should be blamed for any situation or ‘fate’ as such and it is just an issue of individual conscientiousness.

Once Booth and Lincoln are seen memorizing their childhood mischief when they had put nails under the tires of their father’s car and he puts the blame on “the white man”. In this scene both the brothers are shown laughing because they know the truth and their father here is shown a victim of racist oppression who misunderstands the actual situation. Parks has turned the issues of social tension into comic scenes, which make the audience laugh and wants to show that there are topdogs and underdogs in this society and dog eats a dog here.

Men in this world are mostly egoistic and usually to prove their point to be right go to extreme extents too. There is a question of dominance and in this play Booth is an underdog and in order to improve his status wants to become a hustler and finally takes up violence. Parks wants to prove that self-interest is different matter for every individual and it overpowers any other relationship in this world. (Parks, Pg 15) Lincoln It aint as easy as all that. Theres— Booth We could be a team, man. Rake in the money!

Sure thered be some cats out there with ast eyes, some brothers and sisters who would watch real close and pick the right card, and so thered be some days when we would loose money, but most of the days we would come out on top! Pockets bulging, plenty of cash! And the ladies would be thrilling! You could afford to get laid! Grace would be all over me again. (Parks Suzan-Lori, Topdog/Underdog Pg. 15) In this extract of the play Booth sounds completely self-centered and is not concerned with his elder brother’s feelings.

Lincoln does not get convinced with returning to card ustling again and want to live his life doing an honest job. Parks represents life in the dramatic “mirror of reality” and wants to leave out the pleasure and reduce the pain of social reality. However ‘Topdog/Underdog’ contradicts neither pain or sadness of the existing society, nor the daily pleasures like drinking, having meal, jokes etc. The extract of the play seems just to satisfy one’s self interest which is the only point of view of manhood and brotherhood and both the brothers are trying to support their dreams and values. 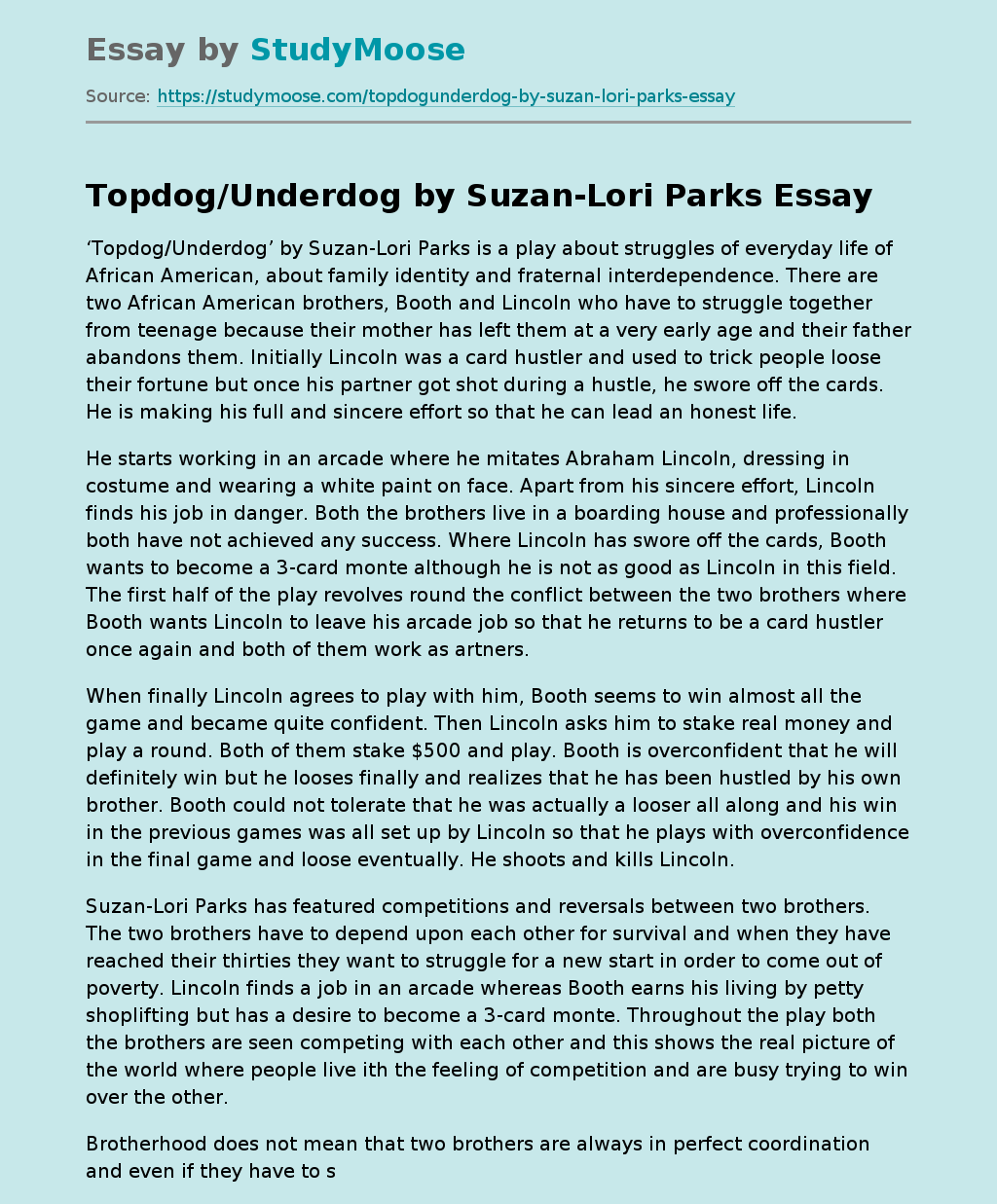