Tone and Style of Ernst Hemingway’s “A Clean, Well-Lighted Place”

Ernst Hemingway is probably one of the writers who utilize unique styles with his literary works, especially his short stories. This is evident in his work “A Clean, Well-Lighted Place,” wherein he explores the use of tone in style throughout the story. With the unique tone and style, the story becomes more interesting to the reader, despite inadequate background about the story, since it is only a short story. Tone and style adds more “color” to the story, encouraging the readers to continue reading.

Don't use plagiarized sources. Get your custom essay on
“ Tone and Style of Ernst Hemingway’s “A Clean, Well-Lighted Place” ”
Get custom paper
NEW! smart matching with writer

One of the elements Hemingway experimented on in this short story is the tone of the writing. We can say that tone is roughly the expression of Ernst Hemingway’s attitude. This is responsible for communicating various emotions, like anger, sorrow, amusement, satisfaction, affection, and more. But this is not limited to what the character of the story says or how he says something. The tone of the story leads to what could be the thematic meaning of the story, or the subject being tackled all throughout.

In order to clearly know the tone of the story “A clean, well-lighted place,” we should take into consideration some of the elements in the story.

The first consideration would be the characters in the story. Here we see two waiters talking about an old, deaf man who was drinking in their café.

The most part of the story revolved around their exchanges of words, and with these conversations we learn a lot about the old man in the story. Aside from the three, we they also mentioned of a soldier and a girl who is the niece of the old man. At the end of the story, we also hear of a barman conversing with a waiter from earlier. These are the characters mentioned in the short story, despite most conversations were between the two waiters.

Another element that determines tone is the details of in the story, including the settings as well as the time it was told. The details were told at the start of the story, where it was revealed that the setting was a café late at night, with no one around except for an old man sitting in a shadow casted by a tree. By the end of the story, it was revealed that the place was well-lit because of the lighting provided by the electric light. When the light was put off by one of the waiters, the mood seemed to change. This means that the light was just a façade to hide the real emotions of people who enjoy clean and well-lit places. This includes the older of the waiters, who is just like the old man, who stayed in the café for being clean and well-lit.

Another element to consider when we talk about the tone of the story was the events that happened. In the story, there was no shift in setting to signify any change of events. The events element however, was established by the two waiters conversing with each other. They talked about the suicide attempt of the old, deaf man who is drinking in their café. He tried to kill himself by hanging, but was foiled when his niece cut him loose. With this event, we learn that the old man has problems inside him, which could also be explained by him drinking glass after glass of brandy.

The nature of the problem was not deeply tackled, but we already know that the old man could just be escaping from his problems. It could be connected to the clean, well-lit café that could be his refuge from his problems. This assumption was further strengthened by the older waiter when he turned off the lights and started cleaning the place. He said that he hated bars and bodegas, but a clean, well-lighted café is different. It could mean that he too, was also escaping his problems by staying until the late night in the bar, even though there were no customers around.

The last tone element present in the story is about the use of words. We see that the short story is composed most of conversations between waiters, and that there were groups of words being repeated in the story. For me, this means that the author is emphasizing on those words, that it could be hints on some important aspects of the story, like the emotions of the characters. We know that the younger waiter was so eager to go home, that’s why he was somewhat irritated by the old man’s presence.

He repeatedly told him that he should have died so that they wouldn’t have any worries at that time. Another manifestation in the use of words was when the older waiter was talking to himself, wherein most of the words he was saying was omitted and replaced by the word nada, meaning none. He seem to find his life worthless, or full of nonsense that’s why Ernst Hemingway played with the word nada, even replacing it in the important words of the Lord’s Prayer.

Ernst Hemingway also employed other techniques in his writings. This makes up his writing style, which refers to how a writer writes his words, which is often the recognizing factor for the readers. Style can also be an indication of the story’s tone. Aside from that, it also sets it apart from other literary works. In Ernst Hemingway’s “A clean, well-lighted place,” it showed the author’s style which is more of a conversational way of telling a story.

The dialogue he employs possesses deep feelings that would definitely challenge the readers on understanding the story’s meaning. It is not merely a conversation between two waiters regarding a customer, it also tells about how these waiters truly feel. It shows that one waiter is eager to go home, but about the other waiter, the readers are unaware that his personality is just like the old man, both of them enjoying the refuge brought about by the clean, well-lighted café. 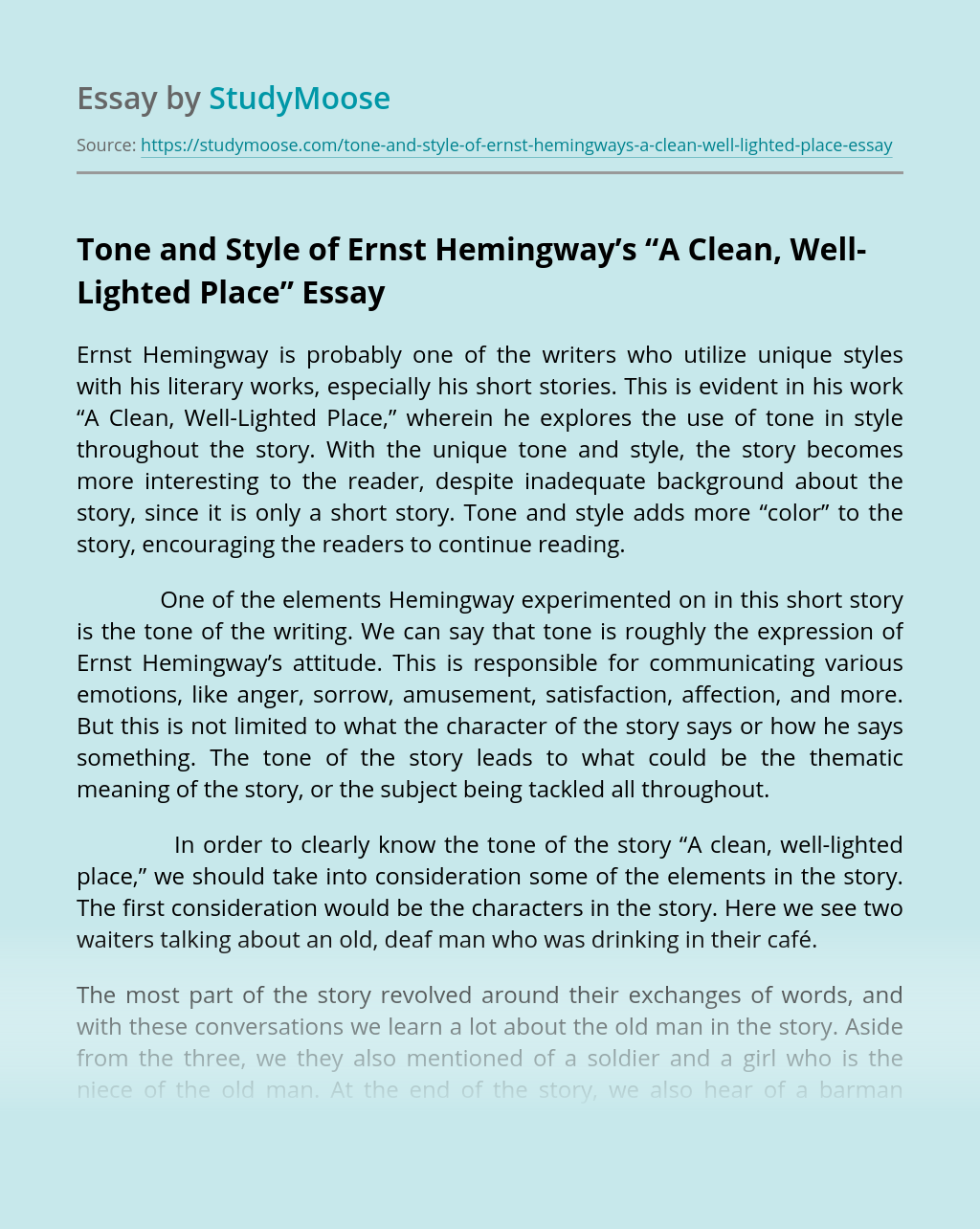