"To Kill A Mockingbird": The trial of Tom Robinson

‘Guilty’ verdict has been reached in the trial of Tom Robinson. A jury of twelve whites has reached a verdict that Tom Robinson, a black male, raped Mayella Ewell, a white woman. The rendition of this verdict has brought to a close a trial that has captured the news and stirred the emotions of this town for several months. It somehow seems fitting that this trial, for a most horrible crime, began during the winter months when all of nature is dead, and has ended with the beginning of Spring when all of nature seems to come alive.

Don't use plagiarized sources. Get your custom essay on
“ “To Kill A Mockingbird”: The trial of Tom Robinson ”
Get custom paper
NEW! smart matching with writer

Tom Robinson, a 25 year old black male, stood accused of raping a 19 year old white woman named Mayella Ewell. The crime took place in November of last year. Both the victim and the accused were lifelong residents of Maycomb, County and were acquainted. Mr. Robinson was represented by County lawyer, Atticus Finch, a well renowned and respected lawyer. Highlights of the Trial The Prosecution’s strongest witness was the alleged victim, Mayella Ewell.

Ms. Ewell stated under oath that the defendant, Tom Robinson, was in fact the person who raped her.

However, there were several discrepancies in the testimony that she provided under questioning and cross examination. The defendants lawyer, Atticus Finch, tried to capitalize on the contradictory statements made by Ms. Ewell. He questioned the witness using a variety of techniques and seemed to receive less than uniform answers to the same questions that were asked in a different manner. At times the witness appeared confused and became frustrated and emotional as Mr.

Finch continued to try and raise a reasonable doubt among the jurors concerning the testimony that was being given by Ms. Ewell. The Defenses’ strongest witness was the accused himself, Tom Robinson. Lawyer Finch called his client to the stand and questioned him about the allegations that were being made about him. Mr. Robinson answered his lawyer’s question in what appeared to be a forthright and honest manner. He denied ever contemplating or committing such a terrible crime. Mr. Finch pointed out that the bruises on the left side of her face were consistent with the injuries that would have been rendered by left handed person.

He went on to demonstrate through logic that this would almost definitely be the case. His client had a left arm that was rendered useless as the result of an accident sustained while working a cotton gin. The strongest defense portion of the case was the closing argument that was delivered by Atticus Finch. Mr. Finch appealed to the all white jury asking them to deliver verdict based on the facts of the case that were presented rather than on the basis of the race of his client and the race of the victim. He appealed to the jury by stating that they had the power to grant life or to end the life of his client. This power that they were given comes with a great responsibility. The jury is responsible to render a verdict that is based in fact and not tainted in any way by race, creed or sex. In this case, the jury must apply the law in a color blind manner. The Verdict and It’s Consequences: For Tom Robinson, the consequences of the trial and the rendition of the Guilty verdict are quite simple and clear.

For the rest of us however, the consequences are not so clear and simple and they will not be immediately known to us. A major consequence is that the race of the defendant and the victim played a major role in the decision. A jury of all whites convicted a black defendant on evidence that was far from beyond reasonable doubt. Emotions ran high and although facts and not emotions should have been the basis for the verdict that was certainly not the case. So this trial demonstrates that we as people have a long way to go in treating all human beings as equals and protect them with the equal application of the laws of our land. We must strive to apply the law in the manner that was defined by our forefather’s , all men are created equal and the law must be applied to all men on an equal basis and not on a basis that is related to their race.

"To Kill A Mockingbird": The trial of Tom Robinson. (2016, Jun 18). Retrieved from https://studymoose.com/to-kill-a-mockingbird-the-trial-of-tom-robinson-essay 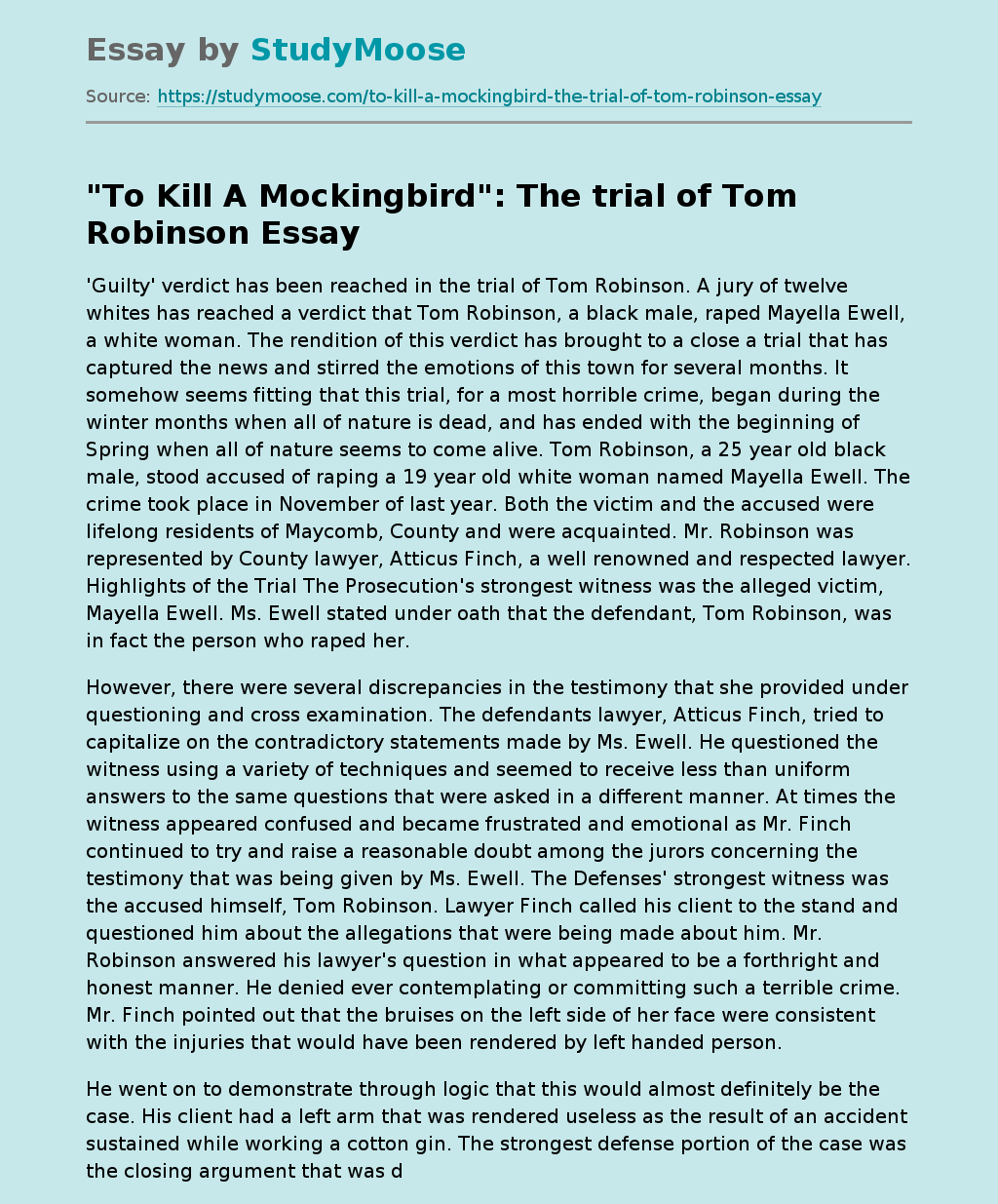