Most of the novels have their own characteristics and they are sometimes similar to each other. The two novels ‘A man told me the story of his life’ and ‘To earn the living’ have several similarities. For example, both characters presented in the two stories both feel the necessity to earn a living. This aspect makes these stories identical, because they are both based on the theme of changing their jobs in order to earn a living. However, there are actually more explicit differences between the two stories, since the author’s style of the two stories are different.

Don't use plagiarized sources. Get your custom essay on
“ “To Earn My Living” & A “Man Told Me the Story of His Life” ”
Get custom paper
NEW! smart matching with writer

These differences will help you to understand the different style of writing, and how their stories differ while they have similar plots.

The first difference between the two stories is that the protagonists’ sexes are different. In ‘A man told me the story of his life’, the protagonist is a male since he introduces his family after his decision of becoming a cook: “I have three children.

This is my wife, Consuela.” (Grace Paley, 2001, pg.6.) From this sentence, it proves that Vincente is a male because he has his wife and three children in the story. But In ‘To earn my living’, the protagonist, Christine, is a female, which is implied on the quotation, “You poor girl!” said my mother.” (Gabrielle Roy, 2001, pg.51.). Due to the difference of sex of the protagonist, the way the writers convey their stories differs greatly. ‘To Earn My Living’ has a much more feminine tone, whereas the other story has a much more masculine tone within the story.

Therefore, the protagonists having different sex alter the entire tone of the story.

The second difference the method used on conveying the story. In ‘A man told me the story of his life’, it doesn’t mention much about the setting of the story such as the location setting or the time; the story gives you no detail information about the places or the time. For example, the story does not explain where or when Vincente existed. Setting description of this story does not make any contribution to the plot at all, so it makes the readers curious about the details of the plot or setting. On the other hand, in ‘To earn my living’, it mentions the settings much more clearly than the Vincente’s story does. “One evening in my tiny attic room…” (Gabrielle Roy, 2001, pg.51.)

From this sentence, the readers are able to know where and when this situation is happening. “Here you are in your last year of school” (Gabrielle Roy, 2001, pg.51.) refer to Catherine as a student who is in her last year of school who is considering her job after her graduation. Afterwards, when she becomes a schoolteacher in a small village, which is called Cardinal in the story, it describes the place clearly as “It was a tiny little village, flat on its back, by which I mean really set flat upon the flatness, and almost entirely red in colour.” (Gabrielle Roy, 2001, pg.53.) Therefore the method used to describe the setting is different between these two stories.

The Last difference between the two stories is that the characters’ background of choosing their job. In Vincente’s situation, although he wants to become a doctor in the future, he finally becomes a cook although he doesn’t have any interest in there. This change was due to the school’s pressure; Vincente was greatly confused and eventually was forced to become an engineer. On the other hand, in the Christine’s story, Christine gets a lot of pressure from her mother because she is the one who has to support her mother and their family living.

“Almost all the former earnings left by your father are gone, now.” (Gabrielle Roy, 2001, pg.52.) From this sentence, it shows their situation at the moment. So Christine has to care about the financial stance their family are on, thus creating a dilemma between her intentions of becoming a writer, and her mother’s wish of making her a teacher. Accordingly, the backgrounds for Christine and Vincente of choosing their jobs are different from each other.

Eventually, there are quite many differences between the two stories even though the theme of the stories seems similar to each other. As this essay proves the differences that the protagonists in the two stories have different sex, the mention of the setting and the background for two characters of choosing their jobs. So these two essays have their own characteristics and styles and are quite different each other. Thus, the stories are different which means that the authors, Grace Paley and Gabrielle Roy, have different styles in their writing. 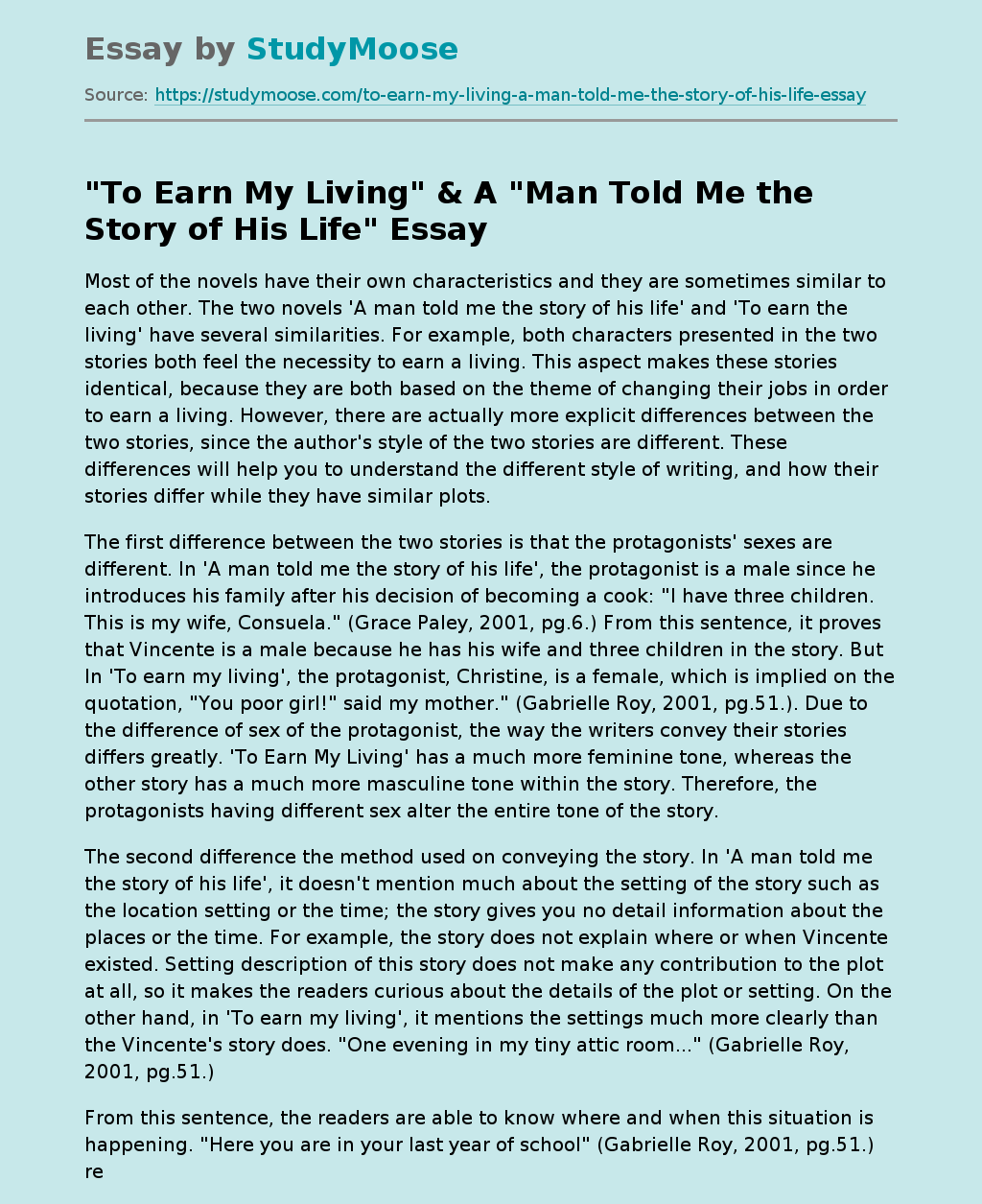