Tim O'Brien as a Representative of Modern Literary Canon

A well-known American writer, laureate of numerous literary awards and recognized master of style Tim O’Brien won his fame for the most part owing to his works devoted to Vietnam war. Three of five his famous books placed Vietnam at center stage (Ringnalda 90). Moreover, his work Going after Cacciato published in 1978 which won the National Book Award is considered by most critics to be one of the best novels about the Vietnam War (Neilson 193). As O’Brien is commonly acknowledged an authority in modern literature it is of essential interest to go further in defining his place in modern fiction and consider if he could be reckoned in the cohort of living literary classicists.

Don't use plagiarized sources. Get your custom essay on
“ Tim O’Brien as a Representative of Modern Literary Canon ”
Get custom paper
NEW! smart matching with writer

The purpose of this study is to reveal whether Tim O’Brien should be included in today’s literary cannon. Toward this end we will scrutinize what are the accepted standards of canon in literature, discuss the main characteristics of O’Brien’s works, examine if they meet canonic standards, and make the conclusion.

The notion of literary canon usually designates the literary works that are the most influental in certain nation’s or world culture (Neilson 44). The American Heritage Dictionary of the English Language define canon as “a basis for judgment; a standard or criterion” (which testifies that canonic criteria may be subjective and  may change depending on prevailing views on what constitutes a masterpiece in literature during different epochs) and also determine literary canonic works as “a group of literary works that are generally accepted as representing a field [of fiction]” (“Canon” n.

p.) (which proves subjective nature of this notion as well).

Usually canonicity of the certain literary work is being recognized almost unanimously by scholars, literary critics and educators. Once recognized such works are included in academic curricula of secondary and high school, colleges and universities. If we sum up these definitions it becomes evident they stipulate that to be reckoned in canon the literary work has to be influencing upon the minds of wide audiences as well as on the works of other literati.

One more indication of canonic status lies in wide presence of the literary work in scholarly discussions, its numerous republications and acknowledgement among wide audience. At the same time, as some scholars define, the literary canon is a construct, fashioned by particular people for particular reasons at particular times (Neilson 50) which confirms the changing nature of it. Anyway, scholars argue that American literature as an academic subject followed the path canon formation always takes: preservation, nationalism and historicizing, transcendent excellence, revisionism (Neilson 52).

Thus, to define whether O’Briens’ works can be reckoned in literary canon, we have to apply above discussed standards to them and analyze their compliance. It is necessary to admit that O’Brien’s works are not so numerous as those of other authors, nevertheless most of them won international fame. In his books he depicted his own Vietnam War experince of foot soldier of American infantry in a special, unique manner combining artistic imagination and homespun truth of war (Ringnalda 106). Myers argues that O’Brien reflected his war-time impressions in a “spare, poetically elusive, and classically toned personal memoir” (139).

What is more, as Myers point out, “O’Brien examines the wrenching transformation of sense and sensibility in fictions that are evocative, challenging meetings of imagination and memory, of the created and the recreated, of the impossible and the possible” (140). Here one of the criteria for canonic works is apparent – capability to depict reality in original manner so that such depiction reaches the souls and minds of the readers.

Literary theorists identify that such features as organic integrity, the nature of literary creativity and originality, and the special character of the aesthetic experience are the discrete values of a canonic literary work. These traits reside in O’Brine’s works, as many critics recognize. For instance, Myers admits that O’Brien’s style is an original one, although it resembles those of Heminway’s – in phrases reiteration, brilliant conducting of narration thread, classic juxtapositions of  valour and pusillanimity, misdeed and atonement (143).

In recent years, particularly in debates about canon development, critics have begun to recognize the ideological work involved in literary reception (Bredahl 149), and here O’Brien’s works could serve as a good example of the ideology of contemporary literary culture. In particular, Bredahl ascertains that “works accepted into the traditional literary canon have in common a preoccupation with enclosure based upon discomfort with the openness of space” (147). O’Brien’s heroes often demonstrate such kind of preoccupation. Author, who is considered to be consistently the most interrogating and epistemological of the war’s writers, voiced two fears: that America would forget the Vietnam War too quickly or remember it too simplistically (Ringnalda 102).

These fears are distinctly reflected in behaviors of his heroes – Doc Peret with his inclination to inwardlooking and self-interrogation, Paul Berlin with his moves back into the remembered past and forward into the imagined future in Going After Cacciato, John Wade who is depressed with his memories of Vietnam in In the Lake of the Woods, and the soldiers suffering from the uncertainty of war and carrying their personal stories and memoirs deeply inside in The Things They Carried.

Analyzing how contemporary literary texts, especially those relating to prose about Vietnam War, achieve precanonical status Neilson distinquishes that “the sometimes antagonistic, often sympathetic relationship between commercial and academic literary cultures” exists, and that academic literary culture has been transformed during last decades, in particular in identifying the important ideological continuity between traditional and revisionist literary studies (2). Such trend signals that modern literary canon is gradually changing which reflected specifically in the literary representation of war.

Examining O’Brien’s works devoted to Vietnam War – Going after Cacciato, The Things They Carried,  In the Lake of the Woods – it is easy to see that the author contributed much to comprehension of what the war mean, over how and why it is fought which, in its turn, is his contribution along with other writers depicting war to the construction of recent historical memory (Neilson 197). Undoubtedly, new views of Vietnam War reflected by O’Brien and other authors of that war novels and memoirs have contributed significantly to the process of transforming public opinion on it – from regarding it as just an effort to further perpetuate American neocolonialism into considering it an American tragedy (Ringnalda 98).

By promoting a literature that favors individual lives over social relations, universal truths over historical contingency, and textual sophistication over social analysis, this cohort of writers has helped to reproduce, not merely in the small audience of serious fiction writers, but in the general public as well, a simple and ideologically unthreatening view of the war (Myers 145). Logically, belonging to this cohort capable to change people’s minds O’Brien can be included in modern literary canon.

Scholars admit that at present canons are made and preserved within critical and academic institutions as well as cultural establishments such as public libraries, publishing houses, repertory theatres, and so on. Modern canon-formation, in this way, is an aspect of reception, of introducing readers to the literature of the near or distant past, and of preserving that literature in the hope of maintaining the culture that helped to produce it (Neilson 47). Applying this criterion of belonging to literary canon to Tim O’Brien’s works we can argue that in fact his famous novels are included in college curricula, they had numerous republications in large circulations, they are widely presented in catalogues of the largest campus and public libraries not only in the U.S. but all over the world.

Our study demonstrated that Tim O’Brien’s literary heritage complies with standards stipulated by modern literary canon, that he contributed substantially in the stature of the present age and to the circulation of contemporary values, and, finally, that he is well-known and highly respected by both literary critics and wide public. Hence, this famous American novelist should be included in contemporary literary canon.

Literature curricula always reflect the cultures in which they are embedded, and living artists, one of which is Tim O’Brien, like grains of sand that produce pearls, have always been social irritants but their mission consists in shedding new light on our world or making people to perceive experience from the point of view of another, thus they are foremost guides who widen human  horizons.

Tim O'Brien as a Representative of Modern Literary Canon. (2017, Mar 13). Retrieved from http://studymoose.com/tim-obrien-as-a-representative-of-modern-literary-canon-essay 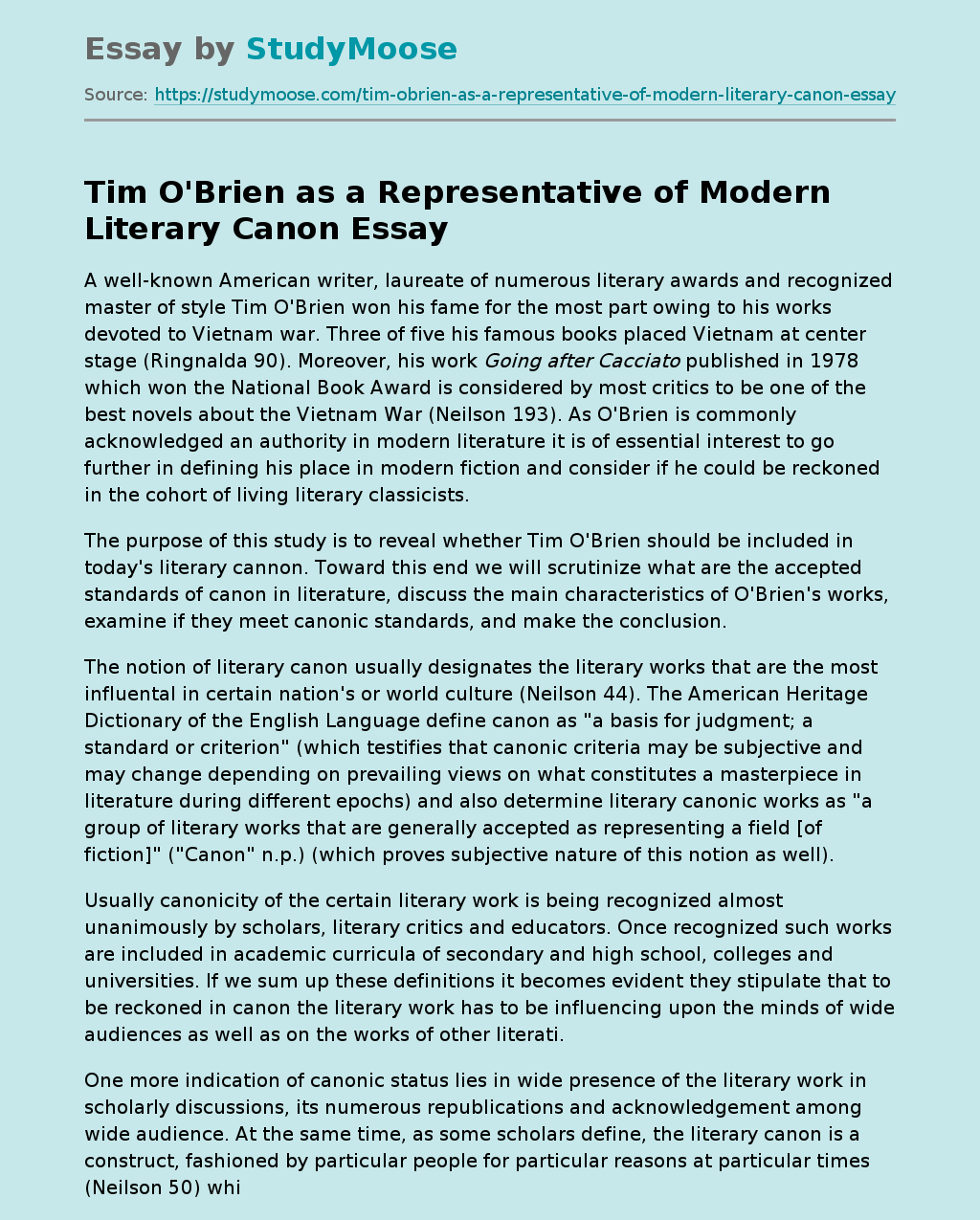